AVAILABILITY OF OTHER POSTS

"If my party leader stands, I would rather go for another post than oppose him."

• If my party leader stands, I would rather go for another post instead of opposing him because we have worked together since I joined the party in 2005.

• The governor said that he is aware Raila has hinted at vying for presidency in 2022, but it is only him and Mombasa Governor, Hassan Joho who applied for nomination as ODM flag bearers in 2022. 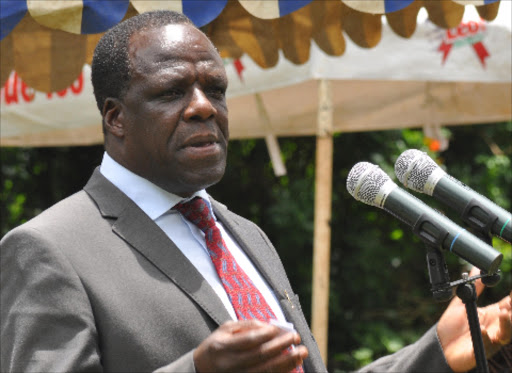 Kakamega Governor, Wycliffe Oparanya has said that he is willing to shelve his 2022 presidential ambition if ODM leader Raila Odinga decides to vie.

Speaking on Monday when he appeared on TV47, the governor said he would rather seek another elective post.

"If my party leader stands, I would rather go for another post instead of opposing him because we have worked together since I joined the party in 2005," Oparanya said.

The governor said that he is aware Raila has hinted at vying for the presidency in 2022, but it is only him and Mombasa Governor, Hassan Joho who applied for the nomination as ODM flag bearer in 2022.

According to Oparanya, after their applications, they were asked to go around the country talking to delegates ahead of the nomination exercise, but that has not been possible because of Covid-19.

The Kakamega Governor who is serving his last term was asked which position he would go for if Raila opts to vie for the presidency and he said that it will depend on what will be available when that time comes.

"The BBI was creating other posts, it was also creating ministers coming from the National Assembly but it depends and we shall discuss with him (Raila) at that level," Oparanya added.

Earlier this year, the two ODM deputy party leaders - Joho and Oparanya - submitted their applications for nomination to fly the party's flag in the next general elections.

"I will go all the way my friend.. and if I win, they should support me... and I shall win. I am sure I will trounce all the other ODM presidential nominees," Joho said.

Despite Joho and Oparanya being the only candidates who have submitted their nomination applications, a section of ODM leaders have insisted that Raila is their man in 2022.

ODM Secretary-General Edwin Sifuna, later on, said in a statement that the party's National Elections Board had resolved to suspend the process of identifying the party's presidential flag bearer.

According to Sifuna, the party's focus would shift to pushing the Building Bridges Initiative agenda.

"After consultation with party leadership and the NEB, the party has resolved to postpone the remaining NEB processes on this matter to focus on the BBI process," Sifuna said.

The party will now focus on pushing the Building Bridges Initiative agenda.
News
2 months ago

Applicants have up to 26th this month to submit their applications.
News
3 months ago
by BRIAN ORUTA Digital Journalist
News
08 June 2021 - 09:53