To spend Sh2 billion on among others, determining appropriate organistional model.

The Office of the Directorate of Public Prosecutions plans to spend Sh3 billion in implementing its Excellence Charter in the next three years. https://bit.ly/3cr4nA5

The Office of the Directorate of Public Prosecutions plans to spend Sh3 billion in implementing its Excellence Charter in the next three years.

DPP Noordin Haji on Tuesday said the 'Excellence charter- Our Strategic Commitments'- is envisioned to steer the office into a 21st Century prosecution service that is responsive to the needs of Wananchi.

The plan will take three years to implement. Haji said his office plays a critical role at every stage of the criminal justice system from the decision to charge to penalties sought and imposed hence the need to put in place strategies for provision of quality services.

The charter provides a roadmap aimed at transforming the office through six key strategic commitments, which include independence and integrity and lifelong learning. Others include reshaping prosecution, leadership, organisational effectiveness and interagency networks.

Under independence and integrity, the office will develop an oath of office, inspectorate unit, internal compliance unit, integrity assurance protocols, whistleblower policy, memorandum of understanding between ODPP and investigative agencies and guidelines on independent prosecutorial decision-making and the exercise of discretion among others.

This will cost about Sh68 million for the next three years while under the lifelong learning pillar, the office intends to spend Sh2 billion in among others determining appropriate organizational model for the Prosecution Training Institute. 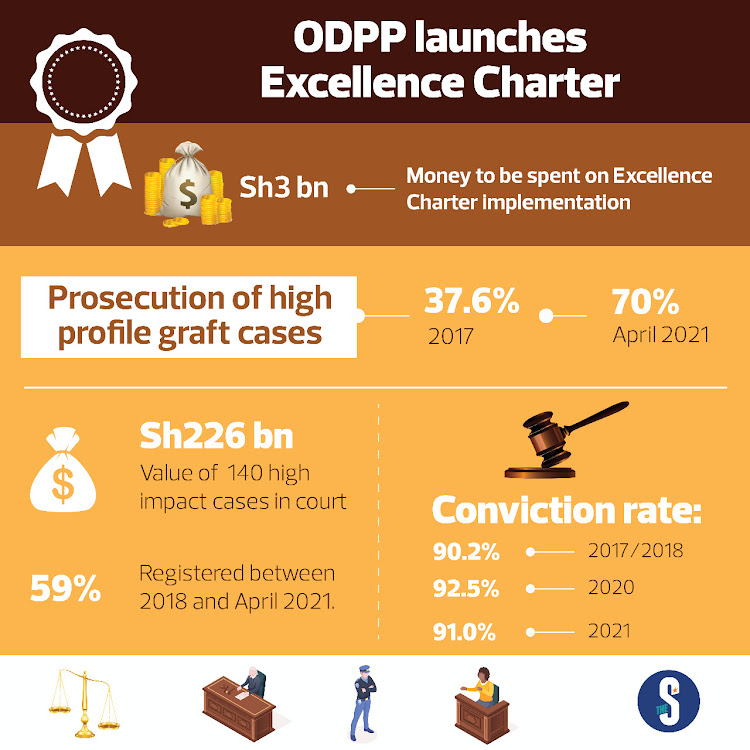 Under reshaping prosecution the ODPP plans to spend Sh94 million in developing guidelines that will help it achieve its goals.

Under the pillar, some Sh59 million in adopting servant leadership policy and training of personnel while under the , organizational effectiveness they will seek to have office change management, review organization structure and delegate decision making powers among others which will cost Sh685 million.

The ODPP says under inter agency networks some Sh71 million will be spent in creating networks in general.

Part of the money will be pulled from donors and government.

Haji said the fight against corruption has made great strides through prosecution of a number of high-level cases and that the rate had increased from 37.6 percent in 2017 to 70 percent as at April 2021.

The amounts involved in the 140 high impact cases pending before court as at April 2021 is Sh226 billion with 59 percent of them being registered in court between 2018 and April 2021.

He said they have developed sufficient tools that can help them effectively discharge their mandate, which include the decision to charge, plea-bargaining, diversion and national prosecution policy among others.

He said the office is developing an automated performance management system, which will make it easier to track and monitor the performance of individual employees, departments and office in general.

They all praised the DPP for the transformation he is leading at the agency saying this would ensure justice for all.

Matiang’i said the executive will not meddle in the work of the ODPP and urged for cooperation among agencies to achieve their goals.

Justice Musinga said there is no need to blame any agency as being the weak link in the criminal justice system.

“We must all recognise how officials from the ODPP are professional and prepared whenever they appear before us for cases,” said Justice Musinga.

He vouched for the enforcement agencies not to be left behind in ongoing transformation in the criminal justice system.

Col Mate who represented the Attorney General's office said they will support the ODPP in its endeavor in achieving the goals.