Before the pandemic, a landowner who leased out 150 acres used to be paid Sh40,000 per month.

• The outbreak of Covid-19 reduced earnings from tourism.

• Over 700 landowners who have leased their parcels of land for conservation. 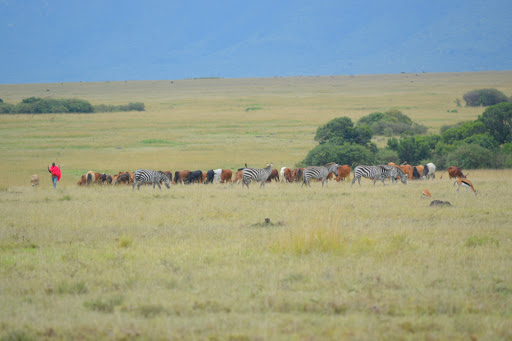 Wild animals and livestock graze on the same field at conservancies within the Mara ecosystem on May 12, 2021.
Image: / CHARLENE MALWA

Hundreds of people who leased out their land for the conservation of wildlife in Maasai Mara are facing hard economic times due to Covid-19.

Landowners adjacent to Maasai Mara have for years been receiving payments, but since the pandemic struck, tourists who bring in revenue have reduced significantly.

Before the Covid-19 pandemic outbreak, a landowner who leased out 150 acres used to be paid Sh40,000 per month.

"My land is under a 25-year lease. I used to receive monthly payments for my land," David Noosaron, 44, said.

He is among over 700 landowners who have leased their parcels of land for conservation. Noosaron owns 145 acres in Maasai Mara.

Mara North conservancy manager William Kipetu said when Covid-19 struck in March 2020, all conservancies were affected as there were no visitors.

"All 12 camps closed in late March and April. When the camps were closed, there was no revenue to pay landowners, rangers and run the conservancies," he said.

"We have money to have conservancies running up to next year because of the support," he said.

"A Covid-19 response strategy for Mara with a focus on sustaining basic conservancy operations on wildlife protection and mitigation of human-wildlife conflict was put in place," he said.

The funds support 11 conservancies. The funds cater to their minimum operational costs and were raised through donors.

The CEO said human-wildlife conflict increased during the pandemic in areas where communities live.

"We have plenty of rain, the grass is good and wild animals are in good health. Livestock is also good and landowners now have enough milk to sell. The price of livestock has also shot up. This means that landowners have other sources of income," he said. He also said there has been no poaching.

The CEO said the pandemic has made it possible for wildlife such as wild dogs, rhinos, lions, cheetahs and pangolins to be spotted with ease.

Sopia said the outbreak of the pandemic came with lessons.

"It shows that relationships and trust built over the years are key, especially in community conservancies," he said.

Sopia said the pandemic also showed that there is a need to look beyond over-reliance on one source of income.

"There is a need to look beyond tourism. Carbon credit and commercial livestock enterprises are where we are focusing on to cushion against any eventualities," he said.

The CEO said there is a need to strengthen policies as communities play a critical role in conservation.

Sopia said conservancies should be embedded in law for the government to contribute towards community conservation.

The CEO said a reserve fund should be established where surplus will be put to deal with the challenges that are the pandemic.

They were concerned that the move would lead to land fragmentation, fuelling human-wildlife conflicts.

This was on the condition that the landowner moves off that land and does not cultivate or develop it.

Landowners who gave out their land for conservation are allowed to graze their livestock at the conservancy land.

Once the grass has been depleted in one block, a grazing committee decides when to move to another block.

The land has been divided into nine blocks on Mara Siana side.