Judge says agreement they signed with petroleum authority still stands until it is lawfully revoked. 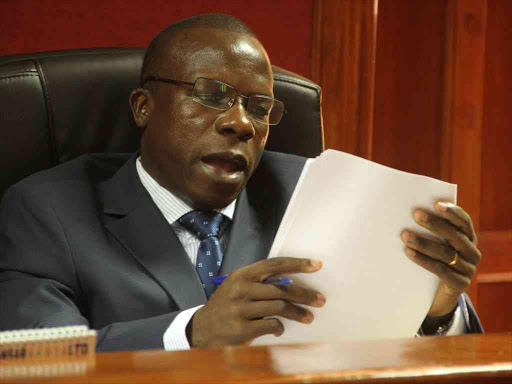 The High Court in Machakos has stopped the prosecution of two people accused of refilling gas cylinders without the consent of brand owners.

Justice George Odunga said the Director of Public Prosecutions, the Energy and Petroleum Regulatory Authority and the Anti-Counterfeit Agency shall not proceed with the case against Talib Zein Salimin and Musa Ali.

Odunga said the case can only proceed if Epra revokes an agreement it entered with Talib and Musa not to proceed with their charging on several offences under the Anti-Counterfeit and Petroleum Acts.

The two are the directors of Swift Gas Distributors, which is a registered dealer in the storage, filling and distribution of liquefied petroleum gas cylinders.

The duo contended that elaborate negotiations were entered into with the authority, culminating into the issuance of a warning letter.

In the letter, the authority cautioned that sanctions would be taken against the duo under the provisions of the Petroleum Act if they did not adhere to the terms of the warning letter.

At the resolution of the dispute, the suspension of the company’s licence was lifted, the cash bail returned and the duo continued with their business in the honest and sincere belief that the dispute had been amicably resolved.

But officers of the authority served them with a notice  to attend court on February 24, last year for the purposes of taking a plea.

It was then that it dawned on them that despite repeated assurances that the dispute arising from the raid that had been carried out on November 29, 2019 had been amicably resolved, the authority was proceeding with the criminal case.

In the raid, a group of around 13 people invaded the premises of the company along Mombasa Road and harassed its staff and customers before carrying away assorted gas cylinders from its premises.

Odunga on Monday said the issue before court was not whether or not the DPP's powers to prosecute were being improperly or unlawfully exercised but that the two expected that the agreement would be adhered to by the authority.

“In this case, the existence of the said agreement is not denied. It is also not denied that the authority has the power to enter into such an agreement. In fact, the authority has expressly admitted that fact. Accordingly, I find that there was a legitimate expectation created in the businessman's mind that he would not be prosecuted if he complied with the terms of the agreement,” said Odunga.

He said the agreement entered into between the two and the authority can only be reversed lawfully.