•The proposal being pushed by National Assembly Majority Leader Amos Kimunya gives the executives in charge of Livestock immense power in the management of beekeeping.

•Remy Tuey director in charge of apiculture at the Kenya Agricultural and Livestock Research Organisation, says the proposals are out of touch with the realities. 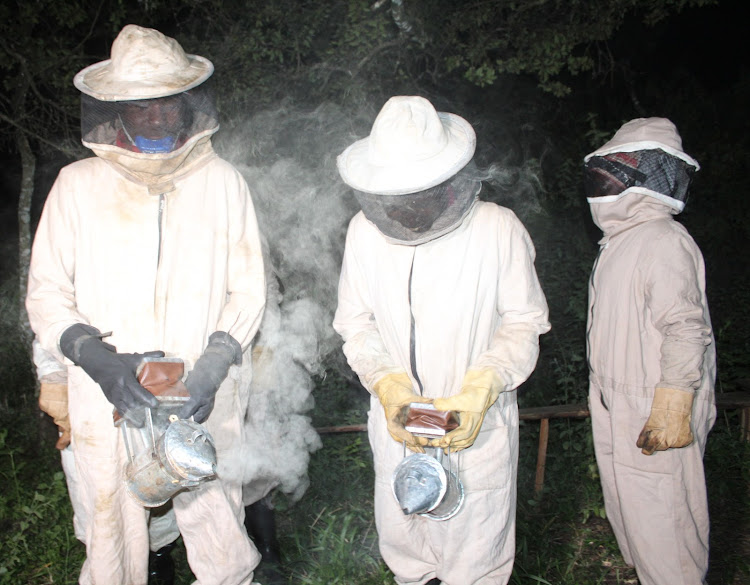 Some of the group members prepare their honey harvesting equipment on one of the harvesting nights.
Image: EUTYCAS MUCHIRI

You risk paying a fine of  Sh500,000 or serve up to one year in jail for keeping bees without a license from the county authorities if a new proposed law gets Parliament's approval.

The Bill seeks to regulate beekeeping and bee products by registering beekeepers and imposing restrictions on setting up hives among others.

The proposed regulations will be a shocker to beekeepers as it will now be mandatory to apply and register any land you intend to use for beekeeping.

In the tough conditions contained in the Livestock Bill, 2021, even beekeeping equipment will have to be licensed.

The proposal being pushed by National Assembly Majority Leader Amos Kimunya gives the executives in charge of Livestock immense power in the management of beekeeping in their respective jurisdictions.

For instance, under the proposed new law, the executive will have a final say on who becomes a bee farmer and approves the sites for apiary before any activity is undertaken.

Such licenses will be valid for one year after which farmers will apply for renewal.

“A person who intends to be registered as a beekeeper shall apply to the county executive member responsible for livestock in the prescribed manner,” the Bill reads in parts.

The new regulations also ban the placement of hive containing bees within 35 metres of a property line separating the land on which the hive is placed from land occupied as a dwelling or used either for a community centre, public park or another place of public assembly or recreation facility.

It will also be a serious offence for any farmer to keep bees 10 metres from the main highway.

The law also makes it mandatory for bees to be kept in a registered and branded hive prescribed by the county authorities.

“Where bees are kept in a hive of a kind other than such as is prescribed, the authority may by notice in writing direct the beekeeper to transfer the bees to a hive of the prescribed kind, within the time specified in the notice,” the Bill reads.

“A person who commits an offence under this Act for which no specific penalty is prescribed shall be liable, on conviction, to a fine not exceeding five hundred thousand shillings or to imprisonment for a term not exceeding one year or both.”

The proposal has already received opposition from sector players who predict the country's death of the honey industry.

According to Remy Tuey, director in charge of apiculture at the Kenya Agricultural and Livestock Research Organisation, the proposals are out of touch with the realities on the ground and will only serve to kill the industry.

“It is unfair to come up with such a proposal, beekeeping is a very young industry and through such proposals that lacks public participation, it only means that the industry will die and we will have to rely on importing honey from Tanzania,” Tuey said on phone.

“It amounts to fighting farmers and soon we will not have honey production in the country.”