Ruto calls for respect for institutions to safeguard democracy

• The DP said it would be an act of betrayal if Kenyans allowed ethnic bigotry and personality cults to creep into the foundation of constitutionalism and the rule of law.

• Ruto noted that Kenyans deserve a nation built on institutions, robust legislation, a performing executive, and an independent judiciary. 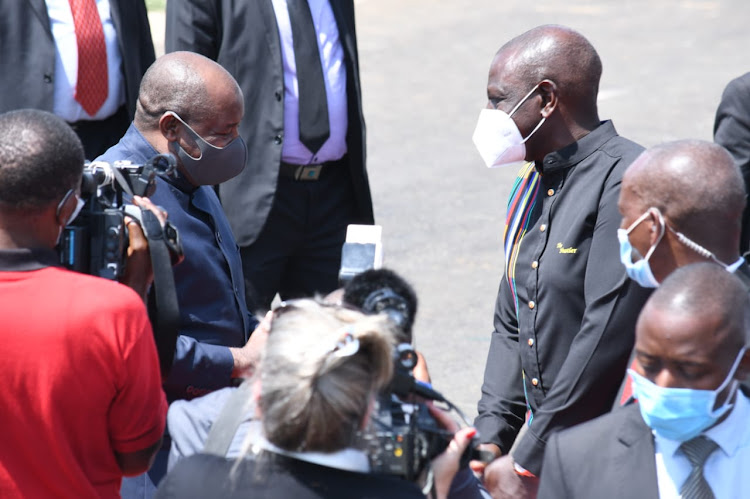 Deputy President William Ruto yesterday said existing institutions should be safeguarded as a way of promoting the freedom that Independence crusaders fought for.

Ruto called for constitutionalism and upholding the independence of institutions. He spoke during Madaraka Day celebrations at Jomo Kenyatta International Stadium in Kisumu.

He was apparently defending the Judiciary over its ruling on the BBI-driven constitutional reforms, he said there is a need for a robust democracy. Ruto said democracy should be anchored to principles and national values.

“Our forefathers worked hard, toiled and shed blood so that we can have a democratic nation, a nation anchored not on personality but on constitutionalism,” he said.

Ruto noted that Kenyans deserve a nation built not on a foundation of ethnicism but on institutions, robust legislation, a performing executive, and an independent judiciary.

“If this is done, we can all celebrate a firm foundation of the rule of law and not the rule of men. This is a befitting day for us to celebrate our forefathers for bequeathing to us this great nation,” he said.

The DP said it would be an act of betrayal if Kenyans allowed ethnic bigotry and personality cults to creep into the foundation of constitutionalism and the rule of law.

He said the forefathers fought for a united nation. “Our forefathers will be proud to see us moving forward and march forward as a united and democratic nation.”

The push to amend the 2010 Constitution has split the country into two rival camps, with Uhuru and ODM leader Raila Odinga leading the BBI proponents, while DP Ruto and his allies are on the opposing side.

Uhuru and the DP no longer read from the same script in the running of government affairs. Uhuru has chosen to concentrate on legacy projects and constitutional amendments. Ruto is instead crafting a game plan for his presidential bid.

Burundi President Everiste Ndayishimiye is among state guests who graced the Kisumu fete. He was the chief guest. Ndayishimiye landed in Kisumu on Monday.

Ruto, however, lauded President Uhuru for launching multibillion-shilling projects in Kisumu and Siaya counties on Sunday and Monday respectively.

Various projects have been delivered in the Nyanza region aimed at boosting economic growth, which Ruto said was a clear indication that Uhuru’s administration is keen on service delivery.

According to the DP, a government that delivers on its development mandate is good for everybody irrespective of who voted for it.

"The administration that you (Uhuru) lead is a clear testimony that you're committed to implementing infrastructural development and service delivery equally across the country," he said.

Ruto said the success in the implementation of national government-funded projects shows that Uhuru's administration is committed to delivering on his pledges.

"The successes are aimed at creating jobs, value and wealth to help in tackling the challenges of poverty and unemployment among millions of young Kenyans," he noted.

Eradication of poverty and job creation will enable Kenyans to lead decent lives, pay taxes and develop themselves, hence all leaders must work towards achieving that, he said.

Among the projects Uhuru launched in Kisumu on Monday is the Sh3 billion refurbished port, which is expected to boost the economy of the lakeside city and the entire region.

The refurbishment of the port, which had been dormant for decades, started in 2019. It is deemed as the Handshake pet project.

“The revival of this port was informed by the need to revamp the economy of the East Africa region and beyond,” he said.

Key in the revival of the port is the launch of a revitalised wagon ferry, MV Uhuru and the Kisumu Kenya Shipyard Limited.

Kenya Shipyard Limited, a state agency, under the management of the Kenya Defence Forces, will repair, refurbish and rehabilitate ships for use in Lake Victoria.

Uhuru launched the shipyard and laid the keel for the construction of the MV Uhuru 2 that will be built from scratch by the Kenya Navy in collaboration with Damen Civil Works, a Dutch company.

“This vessel will support our sister ship, which we rehabilitated. It has caused the movement of over 50 million litres of fuel between the Port City of Kisumu and Uganda, therefore reducing the cost of fuel in Uganda as a result of the cost of reduction of transport, as well as the reduction in losses during transportation,” he said.

He was accompanied by the visiting Burundi President Evariste Ndanyishimiye and ODM leader Raila Odinga.