Protocol breach: Uhuru invites Raila to give speech after Ruto

• Raila in his speech said the handshake has given them an opportunity to bring Kenyans together.

• He said that the main aim of the BBI is to aspire to move together and unite Kenyans together. 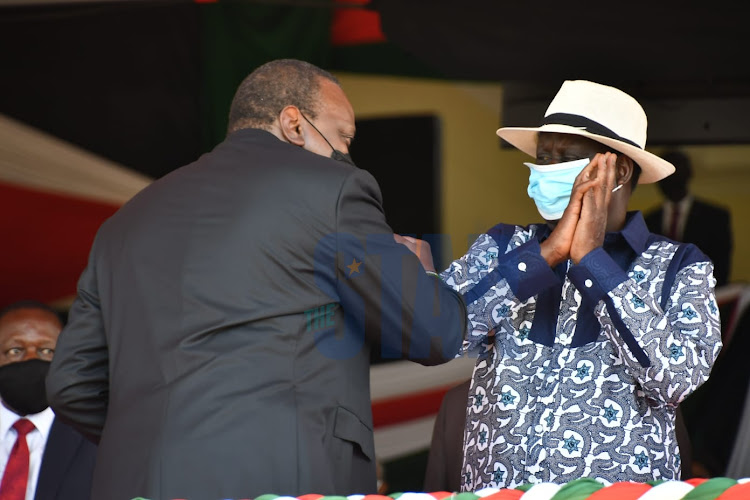 President Uhuru Kenyatta on Tuesday broke protocol when he invited former Prime Minister Raila Odinga to speak to the public after Deputy President William Ruto made his speech during the 58th Madaraka Day celebrations in Kisumu.

Ruto made his speech and as it has been, invited the President to make his speech.

Uhuru started by greeting the guests and the public before apologising for breaking protocol.

“You will forgive me, but let me break protocol today to invite my brother, Raila Odinga, Jakom, to say hi to you and to deliver his Madaraka Day sentiments, welcome my brother,” Uhuru said amid a cheering crowd.

Raila in his speech said the handshake has given them an opportunity to bring Kenyans together.

He added, "We should aspire to move together and unite Kenyans together, that is the main goal of the BBI."

After his speech, Raila then invited Uhuru to make his speech as the crowd cheered.

"Received Burundian President Évariste Ndayishimiye at Kisumu International Airport at the start of his two-day official visit to Kenya. President Ndayishimiye will be the guest of honour at the Madaraka day celebrations tomorrow," Raila tweeted.

Ruto, Raila among dignitaries in attendance at Madaraka Day fete in Kisumu

Ruto, accompanied by his wife Rachael, arrived at the stadium at 11.21 am.
News
6 months ago

Uhuru told the officers to let the man be.
News
6 months ago
by TRACY MUTINDA Lifestyle, Entertainment Writer
News
01 June 2021 - 16:01