Eyes on Ruto as Raila fills 'vacuum' for Uhuru

• Raila who has no formal position in President Kenyatta's administration was the man of the moment in Kisumu on Monday.

• Ruto has kept off Uhuru’s Nyanza tour that began on Sunday as the President doles development projects to the region that has for years cried over economic exclusion. 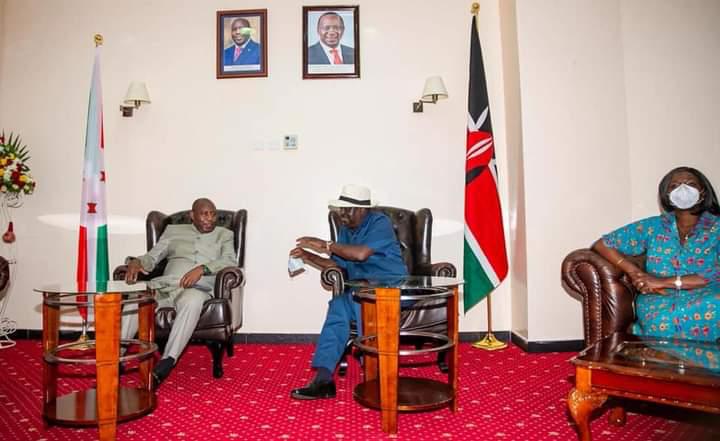 Raila in Kisumu with Burundi President

ODM chief Raila Odinga has stepped forward to fill the political vacuum created by the absence of Deputy President William Ruto as the DP’s stature in government diminishes.

For the first time in many months, Raila, Ruto and President Uhuru Kenyatta will come face-to-face at the Madaraka Day fete, a national celebration that will be loaded with political symbolism.

Raila, who has no formal position in President Kenyatta's administration, was the man of the moment in Kisumu on Monday.

He held brief talks with Ndayishimiya at the airport’s VIP lounge as Foreign Affairs Cabinet Secretary Rachel Omamo looked on.

University of Nairobi lecturer Herman Manyora told the Star that the role handed to Raila signifies the President's confidence in him at a time when Ruto is chasing political power.

“Raila occupies a special place in the unique circumstances the country is in. He is above everybody else except the President,” Manyora said.

But Political risk analyst Dismas Mokua said only a person delegated by the President in writing can exercise the responsibilities of receiving a visiting head of state.

“It is curious that Raila Odinga is engaging in bilateral engagements. This is a radical departure from the norm and an assault on state protocols given the fact that bilateral conversations are in the province of the President or persons who enjoy delegated responsibilities,” Mokua said

Raila being the opposition leader, Mokua argued, would not be delegated by government to welcome a visiting head of state in an ideal situation where the President enjoys working ties with his deputy.

Ruto has kept off Uhuru’s Nyanza tour that began on Sunday as the President doles development projects to the region that has for years cried over economic exclusion.

However, the DP is expected to arrive in Kisumu on Monday morning to attend Madaraka Day celebrations to be held at the Jomo Kenyatta Stadium in Momboleo.

Constitutionally, the DP as the President’s principal assistant will step out to invite the Uhuru to address the nation.

Nonetheless, his demeanour will be closely watched given the political overtones that have preceded the event.

Uhuru and Raila set the tone when they rallied the region on Sunday to back the Building Bridges Initiative process to amend the Constitution, to which Ruto is opposed.

The President and his handshake partner had expressed optimism that they would get the BBI reggae back to stage with a successful appeal of the High Court ruling that declared the process unconstitutional.

Their tours and vigorous campaigns for BBI present a tricky moment for Ruto as he lands in Kisumu.

Ruto and his political troops widely celebrated the High Court judgment that stopped the “BBI reggae”, with Ruto urging the government to move on and focus on other priorities.

“All patriotic citizens must defend these tenets [rule of law and constitutionalism ] just like Judiciary did. Now let’s focus on Covid vaccination, economic recovery, the Big Four Agenda and stay united,” he said after the ruling.

Uhuru has however declared that the High Court decision was just a temporary setback.

The DP had during the National Prayer Breakfast last Thursday asked the BBI proponents to get back to the negotiating table to build consensus to avoid dividing the country.

His calls for a political truce were snubbed by the President.

Politicians and analysts say all eyes will be on Ruto's speech and body language as he attends the 58th Madaraka Day celebrations.

The celebrations are being held in “enemy territory” as the region’s vote bloc has been under Raila’s lock and key.

Signifying Raila's elevation was a decision by the state to allow the ODM boss to fly in military choppers to Kisumu.

United States International University professor of History and Diplomacy Macharia Munene told the Star that Uhuru could have allowed Raila to engage on personal diplomacy with other leaders ahead of 2022.

“Uhuru is appreciating the role Raila has played and he was demonstrating that by recognising his personal friendship with the visiting Head of State,” Munene said adding that there was more then meets the eye.

He went on, “ In terms of protocol it is the President, deputy president, minister or designated state officer who receives a visiting head of state. This was a big honour for the former prime minister.”

But Mokua said Ruto has DP Ruto has several assets that include but not limited to the gift of the gab and ability to connect to the crowd that enables him to swim in any political turbulence.

“He will land in Kisumu in style and play his role with minimal challenges. He doesn’t run away from responsibility and he cannot be intimidated by a charged audience,” Mokua said.

The President and Raila have for the last two days rolled out a blitz of development tours laden with far-reaching political undertones likely to shape the 2022 presidential battle.