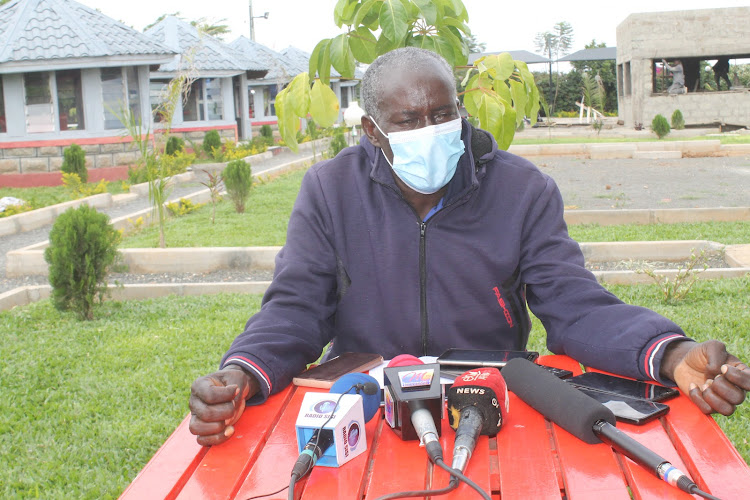 Thanks for your support, you Machakos media team played key roles in my life. These were former Kibwezi MP Kalembe Ndile’s last words to Machakos journalists.

Kalembe called some of the journalists, his closest friends thanking the entire Machakos scribes’ fraternity for being supportive of him not only during his political journey, but private life too.

Kalembe, through short phone calls to Mbaitu FM Machakos-based reporter Regina Mutua and his County Champion counterpart Cornelius Kimbui, said the journalists were the only ones who visited him when he was sick.

“Thanks for your support. You Machakos media team played key roles in my life. You visited me while I was sick. Remain focused and united,” Kalembe told Kimbui during the Thursday’s 3pm phone conversation.

He called the two journalists from his hospital bed at Nairobi Hospital where he had been admitted.

He added, “Pray for me and ask Kenyans to pray for me too, I am unwell.”

"My father was admitted at the hospital last week. He died this morning and we are at the same hospital now. We will give more details later," Kioko said on phone.

"Kalembe called me last week and told me that he wasn't feeling well. He had been admitted at the Nairobi Hospital," Mutua said.

Kalembe last Sunday called for a press briefing in Athi River, Machakos county where he called for unity among national leaders.

He said Wiper leader Kalonzo Musyoka should unite with his ODM counterpart Raila Odinga so that they form the next government after 2022 general election.

Kalembe has been a darling to many, not only journalists but also the general public despite the fact that he was dining with high and mighty.

He in 2017 contested for Mavoko parliamentary seat on a Jubilee party ticket but lost to the incumbent Patrick Makau. He was position two in the contest. The deceased had, however, declared his bid for the same seat in forthcoming 2022 general election on a Wiper party ticket after mending ways with Kalonzo.

Kalembe played great roles in the recent Machakos senatorial by-elections, he was in charge of voter mobilisation and campaigns coordination for Wiper candidate Agnes Kavindu who won the contest.

Several leaders among them Uhuru and  Raila have sent their condolences to the politician’s family and relatives.

Several leaders including Kalonzo Musyoka visited Lee Funeral Home where the body had been moved to pay their last respect to the departed politician.