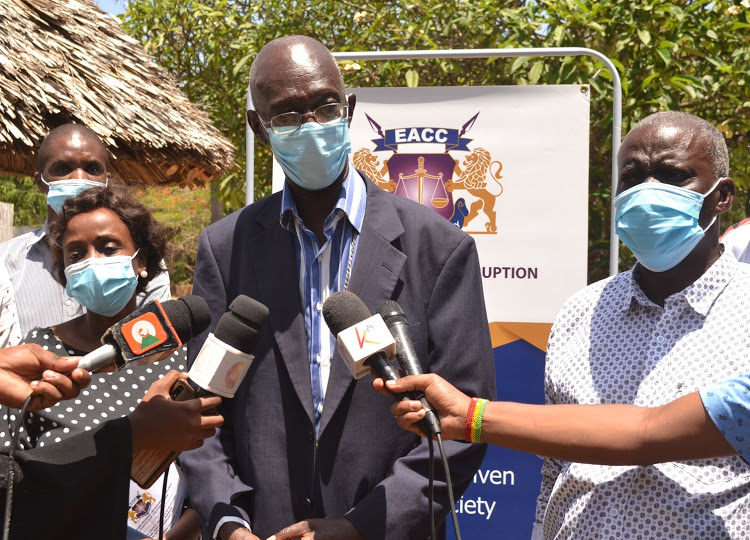 EALA MP Oburu Oginga is among bigwigs that forfeited their assets to the state after it was established they acquired the property illegally.

The former assistant Finance minister forfeited a piece of land in Kisumu valued at Sh35 million that was established to belong to the Kenya Railways Corporation.

EACC, in its report for the year ending June 2020, has also listed former Alego MP Oloo Aringo among persons who had been irregularly allocated railways land.

Others were Mosop MP Vincent Tuwei who returned to the government three KRC assets valued at Sh30 million each.

The property was part of the Sh12 billion illegally acquired and unexplained assets recovered through court proceedings and out-of-court settlements.

The anti-graft agency further recovered Sh282 million from the former City Hall official cash proceeds believed to be from the county coffers.

Commissioner of Lands Sammy Mwaita, who also served as Former Baringo South MP, returned a Sh56 million house in Mombasa that he had allocated to his company.

The commission, during the period under review, also recovered Sh11.5 million from Dr Ibrahim Haji Issak, the managing director of Kenya Meat Commission.

Another Kalro parcel of Sh933 million was repossessed from Savannah Breweries Ltd during the period under review.

The anti-graft team also recovered from Pau Moses Ngetha and others Sh1 billion property belonging to the City Council of Nairobi at Woodley estate.

A firm trading as Lima Ltd had to revert to the state assets belonging to the Administration Police Service and Uasin Gishu county valued at Sh1.4 billion.

In the same period, the EACC says it averted the loss of public funds to the tune of Sh10 billion through 31 proactive investigations. It stopped the payment of Sh252 million by Kenya Railways for land in Ngong'.

The intended payout was cancelled after investigations revealed that the parcel was overvalued and was on riparian reserve.

EACC investigations also averted the loss of Sh40 million by the office of the Auditor General on purported IFMIS training.

It further stopped the transfer of public land valued at Sh250 million by the county government of Kiambu.

The land in Ruiru was due to be transferred from education to residential by a private developer working in cahoots with unscrupulous county officials.

The commission further caused the cancellation of a tender for proposed construction of Naku’etum peace dam in Turkana county by National Water Harvesting and Storage Authority at Sh231 million.

EACC further reports that it averted the loss of Sh200 million after cancelling the payment meant for the partial construction of a pavilion at Afraha Stadium in Nakuru town by the county government.

The anti-graft agency also stopped payment of Sh150 million, which the School Equipment Production Unit was to make to Vulcan Lab Equipment for supply of school equipment.

EACC further says it prevented the loss of Sh120 million at the Kenya Ports Authority following an inquiry into allegation of embezzlement of funds by one Antony Muhanji, a staff of KPA.

Payment of some royalties to the tune of Sh12 million was stopped following allegations of fraudulent manipulation.

“For the officers who failed, the commission recommended administrative action to the respective institutions,” the report reads.

Bribery remains the most prevalent graft act, according to the report, and accounted for 34 per cent of the reports recommended for investigations.

Embezzlement constituted 23 per cent, procurement Irregularities 11 per cent with abuse of office accounting for nine per cent as well as unethical conduct.

Cases of fraudulent acquisition and disposal of public property constituted six per cent, with unexplained wealth accounting for four per cent.

Asset held by a public officer should be proportional to his legitimate source of income.
News
2 years ago

Wabukala says Kemsa probe files have been handed over to the DPP for action
News
1 year ago
by MOSES ODHIAMBO Journalist and Political Writer
News
27 May 2021 - 06:55