•He replaces Justice William Ouko who was last Friday sworn in as a judge of the Supreme Court.

• In January, Musinga was appointed the chairman of the Judiciary Committee on Elections (JCE). 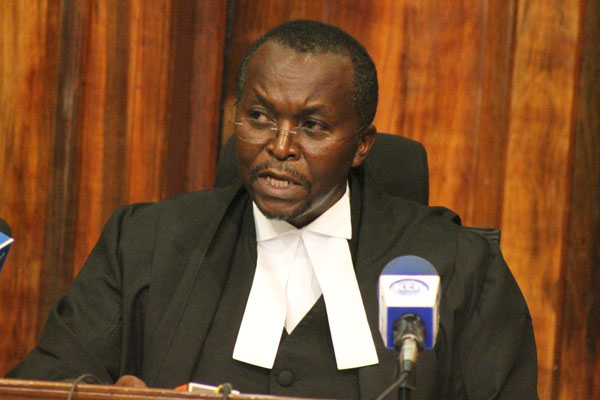 Appeal judges have elected Justice Daniel Musinga as their president.

He replaces Justice William Ouko who was last Friday sworn in as a judge of the Supreme Court.

He was sworn in alongside Martha Koome, who took oath of office as Chief Justice.

They were sworn in at State House in a ceremony attended by key officers from the Judiciary.

Ouko had also interviewed for the position of CJ but was unsuccessful.

In January, Musinga was appointed the chairman of the Judiciary Committee on Elections (JCE).

On Monday, Koome assumed office at the Supreme Court.

During the ceremony, Koome received two reports on the state of the Judiciary and flag of the Supreme Court.

Judiciary chief registrar Anne Amadi reminded Koome that she is inheriting an institution that is grossly underfunded.

Amadi, however, noted that some progress has been made with the Executive in relation to funding, acknowledging the presence of house speakers at the event of the assumption of office of the CJ.

Deputy Chief Justice Philomena Mwilu took to the stand and thanked God for giving her chance to serve as acting CJ for 162 days.

She said it was an honor from God which she doesn't take lightly.

She asked for forgiveness from staff members whom she might have wronged.

Instruments of power will be handed over to Koome.
News
1 year ago
Post a comment
WATCH: The latest videos from the Star
by JILLO KADIDA News Editor
News
24 May 2021 - 12:12
Read The E-Paper