The lobby wants Koome to use her experience in the Judiciary and access to President Uhuru Kenyatta to have the judges sworn in.

•They also want Koome to shun confrontational approach, enhance interdependence with other arms of government 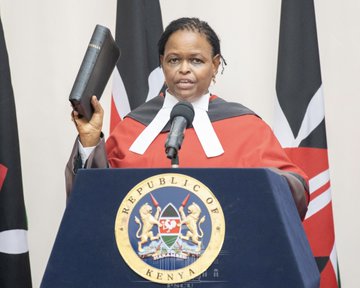 Justice Martha Koome takes oath of office as CJ on May 21, 2021
Image: PSCU

The Law Society of Kenya has challenged Chief Justice Martha Koome to end the stalemate over the appointment of 41 judges to various courts.

In a congratulatory message by the society’s CEO Mercy Wambua on behalf of its council, the lobby wants Koome to use her experience in the Judiciary and access to President Uhuru Kenyatta to have the judges sworn in.

This, Wambua says, will offset the biting shortage of judges, especially in the Court of Appeal.

Koome and Court of Appeal president William Ouko were sworn-in on Friday at State House as Chief justice and judge of the Supreme Court respectively.

“During the interview, a question was put to her on the failure by the President to appoint the judges of Court of Appeal, employment and labour relations and environment and lands court. The time has come when her proposals and strategies in dealing with the matter will be put to test,” Wambua said.

LSK also challenged the new CJ to be relentless in the fight against the “developing culture of impunity and attack on judicial officers by parties dissatisfied with court orders.”

The society also assured Koome of its support in confronting cases of disobedience of court orders in a bid to secure the “judicial independence, constitutionalism, access to justice and advancement of the rule of law, heralding a new pragmatic era of respect for court orders.”

LSK also called on the CJ to prioritise completion of the judicial transformation started by her predecessors, David Maraga and Willy Mutunga. It constituted digitisation process, devolution of the processes and improvement of court infrastructure.

And rather a confrontational approach, the society has advised Koome to perform her duties in a way that ensures more interdependence among the three arms of government for smooth running of the Judiciary.

This will ensure adequate funding through entrenched judiciary fund without compromising the functional and institutional mandate of the judiciary, it said.

The society said the appointment of Koome was a milestone in the country’s endeavor to attain gender parity and that it was a demonstration of the country’s commitment to the constitutional provision of two-thirds gender rule.

It also hailed appointment of Ouko as a move that will enrich the jurisprudence of the Supreme Court given his long stint in the Judiciary in different roles.