Abdi pleads for leniency as Senate team backs his impeachment

Panel sustained one of the charges preferred against the Wajir governor

• MCAs listed 15 allegations under the charge, including embezzlement of county resources, but the panel found that the allegations were not substantiated.

• The committee also did not sustain the second charge of abuse of office and gross misconduct contrary to provisions of the Constitution. 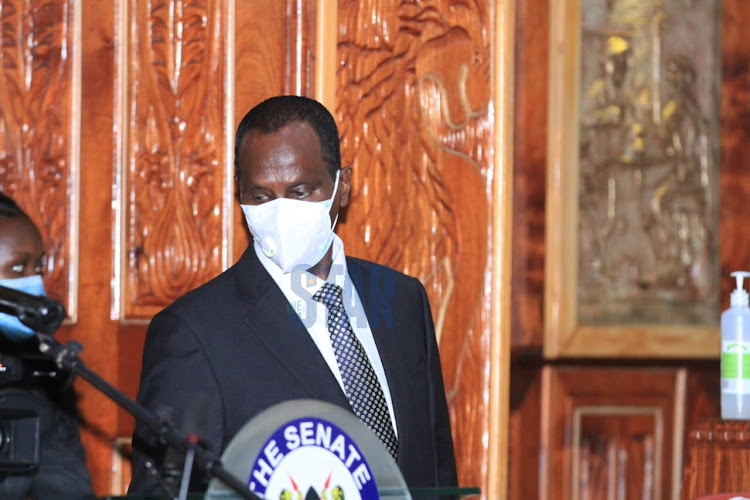 Wajir Governor Mohamed Abdi on Monday made a passionate plea to senators to be sympathetic and humane and spare his job.

This came after a committee recommended that the Senate uphold his impeachment for running down the healthcare system, thus compromising the lives of residents.

The 11-member impeachment committee found that despite the county assembly appropriating Sh2.4 billion to the sector, health facilities are in a sorry state.

This, according to the panel chaired by Nyamira Senator Okong’o Omogeni, amounted to gross violation of Article 43(1) of the Constitution on the right to best attainable health standards.

“The committee found that allegation 15 on the violation of the right to health of the people of Wajir has been substantiated and further, that the violation meets the threshold for the impeachment of a governor under Article 181 of the Constitution,” the committee said in its report.

As a result, the committee sustained the charge on gross violation of the Constitution, the Public Procurement and Asset Disposal Act, the Public Finance Management Act and the County Governments Act.

But the governor urged the house to carefully study the charge sustained by the committee and give him another chance.

“I wish to plead with the senators to be sympathetic, not impeach me just because of one issue. It can be a violation of the Constitution but it is not a gross violation,” he told the plenary.

“Impeachment is in our laws. However, in my opinion, the impeachment before the house does not meet the threshold. What the committee has sad is that health was an issue that was impeachable but it cannot amount to gross violation of the Constitution."

He listed the achievements of his administration in the health sector, saying they have built 50 new health facilities, acquired a powerful generator to run an oxygen plant and the entire county referral hospital. Abdi said the county currently has 16 operational ambulances.

“In a diagnostic survey conducted by the national government, Wajir county was given 89 per cent. We were rated second best,” he said.

The committee also found the governor culpable for failing to submit the annual report of the implementation status of county policies and plans to the county assembly.

“The committee found that the governor did not comply with the requirement under Section 30(2) (2) (j) of the County Government Act to submit the report on the implementation status of the county policies and plans."

The committee, however, determined that the violation does not meet the threshold for the impeachment of a governor.

MCAs listed 15 allegations under the charge, including embezzlement of county resources, but the panel found that the allegations were not substantiated.

The committee also did not sustain the second charge of abuse of office and gross misconduct contrary to provisions of the Constitution. In the charge, the MCAs had accused Abdi of delegating to his wife the authority of the management and running of the county executive.

“We found this allegation to be frivolous, not substantiated and not proved. It remains a mere allegation,” Omogeni said while tabling the report.

In their case laid before the committee, the MCAs alleged that they had allocated Sh2.4 billion or 22 per cent of the total budget to the health department since the 2018-19 financial year.

Despite the huge allocation, Wajir County Referral Hospital, which serves as the region's Covid-19 testing centre, no longer provides Covid services because of faulty test kits and lack of reagents, they said.

“This is despite an additional allocation of Sh194 million in the third supplementary budget for 2019-20 in a bid to contain the spread of the disease,” the report read.

The MCAs, in their submissions, narrated how a desperate resident in Eldas had to buy tyres and fuel for the county ambulance.

“This notwithstanding the death of the senior county public health officer for lack of oxygen in the main county referral hospital,” the report says.

Testifying against the governor, Habaswein MCA Abdirahman Dahir submitted that the renal unit in the county referral hospital was shut down following a strike by employees in the health department.

“In addition, Hon Abdirahman stated that the Wajir county health system has been at its worst since Independence and used the public outcry as the parameter to gauge the poor state of the health system in the county,” it says.

Dahir added that Habaswein residents had petitioned the county assembly regarding the state of the Habaswein Subcounty Hospital. He said the workers there remained unpaid for a long time, hence avoided work. They also decried poor working conditions in the hospital.

But county director of health Dahir Somow discounted the allegations. He said the county had 122 facilities that were operational and 42 others were in the process of being operationalised.

He submitted that the county had registered significant improvements such as the proportion of pregnant women who attend antenatal clinics from 49.2 per cent in 2017 to 86.1 per cent in 2021.

The report, however, said: “Dr Somow, however, stated that the health sector in the county faced a major challenge of high staff turnover owing to the resignation and desertion by employees due to insecurity.”