• MCAs had accused the governor of among others, squandering Covid-19 funds and running down the health care system in the county. 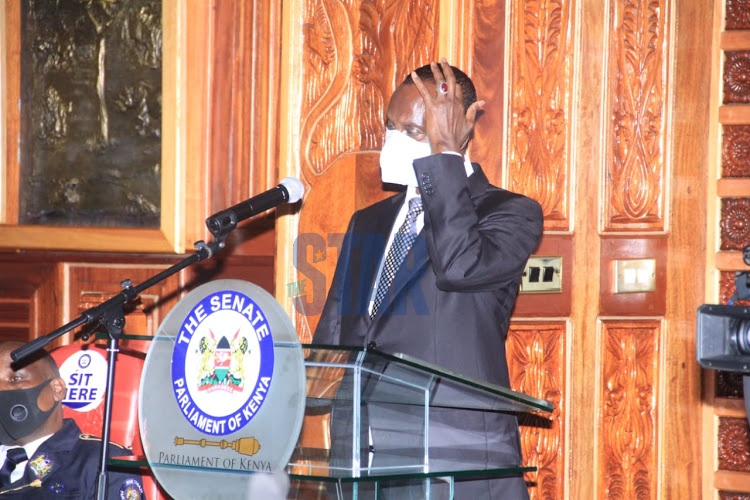 A Senate Committee has recommended the impeachment of Wajir Governor Mohammed Abdi.

However, the panel found the MCAs failed to substantiate the second charge of abuse of office and gross misconduct.

The team was chaired by Nyamira Senator Okong'o Omogeni.

The Senate committee report on Abdi's impeachment was tabled on Monday.

The Committee found the governor violated the right to health of the people of Wajir county.

"The committee finds that the allegation was proved and was therefore substantiated.

"The committee further found that the allegations meet the threshold for impeachment of the governor under Article 181 of the Constitution," the report read in part.

The MCAs had accused the governor of among others, squandering Covid-19 funds and running down the health care system in the county.

"A total of Sh2.92 billion was allocated towards improvement of the current health care system.... despite these colossal amounts.... Under the keen eye of the governor, the health system fell into disrepute, disrepair and failed as a whole," Habaswein MCA Hussein Abdirahman Dahir, who testified against the governor, said in a sworn affidavit.

At least 24 of the 47 elected senators (delegation) are needed to sustain the charge.

Last week, Senate Speaker Kenneth Lusaka gazetted a special sitting of the Senate on Monday to consider the report.

The senatorial impeachment Committee chaired by Nyamira senator Okong'o Omogeni retreated on Friday to file a report on the investigation of the Governor's impeachment ahead of Monday's sitting.

The hearing on the impeachment case was concluded on Thursday evening.

Thursday’s session started at 10.20 am with the second witnesses for the county assembly taking the stand for cross-examination.

MCA Ahmed Bare testified on Wednesday but could not be cross-examined by the Governor's lawyers because time had elapsed.

In his submission, Bare who seconded the impeachment motion against the governor in the county assembly alleged the governor's wife and children were involved in the procurement irregularities that now threatens to sink the county boss.

Wajir MCAs on Wednesday sought to place the wife and children of embattled Governor Abdi at the center of what they called a "tender graft web" that threatens to ensnare him.

The MCAs detailed how Kheira Omar Maalim— the governor’s wife whom they described as the ultimate leader and de facto authority — allegedly has been influencing tenders and receiving kickbacks.

Wajir Governor hopes that the Senate will vindicate him

Governor will know his fate on Monday when the committee tables a report.
News
1 month ago