• Kenya’s Permanent Representative Amb Martin Kimani said the escalation of violence is reversing any progress towards permanent and secure peace.

• Martin Kimani says Kenya, a non-permanent UNSC member, is concerned that the violence, particularly it is touching on religious sites, will fan extremism and hatred. 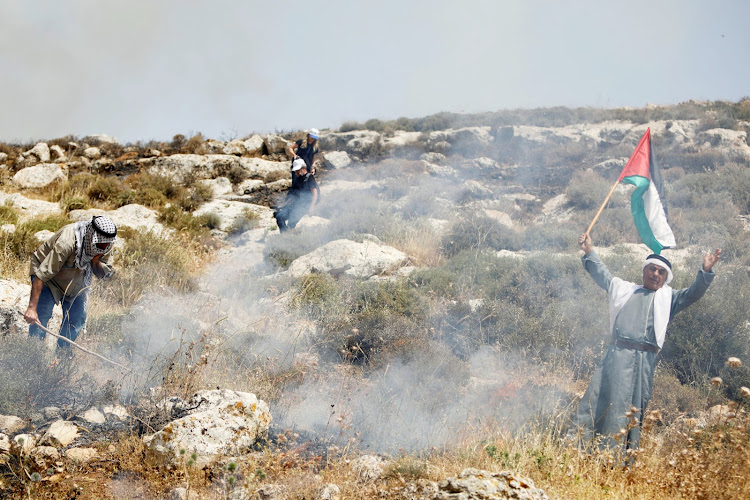 Palestinian demonstrators try to put out a fire caused by tear gas canisters thrown by Israeli forces at a grass field during a protest against Israeli settlements, in Beit Dajan in the Israeli-occupied West Bank April 30, 2021.
Image: REUTERS/Raneen Sawafta

Kenya has called for an immediate ceasefire and cessation of violence between Israel and Palestine, as the first step to a renewed push for peace.

Addressing the UNSC on Sunday, Kenya’s Permanent Representative Amb Martin Kimani said the escalation of violence in Jerusalem, Tel Aviv, West Bank and the Gaza Strip is reversing any progress towards permanent and secure peace.

“Kenya has consistently supported diplomatic negotiations, conducted in an environment of peace, to achieve a two-state solution in which Israel and Palestine live within secure and recognised borders in line with the June 1967 borders,” Kimani said.

He said Kenya, a non-permanent UNSC member, is concerned that the violence, particularly when it is touching on religious sites, will fan extremism and hatred.

This will lead to the further erosion of the moderate middle ground on which the compromises required for peace can be made, Kimani said.

The latest wave of violence, the worst since 2014, blew up after weeks of tension in East Jerusalem, triggering clashes at al Aqsa mosque or the Temple Mount.

Hamas is reported to have fired rockets at Israel after warning security forces to leave the mosque, triggering the retaliatory fire.

In a phone interview with the Star, Israel Ambassador to Kenya Joseph Oded blamed the chaos on “extremism prayers against peace and order”.

Ambassador Oded said some extremists hurled stones at Jewish worshippers celebrating Jerusalem Day, which marks the occupation of Jerusalem in 1967.

“Israel always respects the right to worship. Israel forces entered the site to stop these extreme prayers against peace and order,” Oded told the Star on Sunday.

Kenya also “strongly condemned” Hamas rocket launches from Gaza against civilian targets in Israel, saying no cause can justify the targeting of civilians.

“In highly emotive situations, such as the ongoing one, police and military authorities should embrace de-escalation, protect lives and avoid the demolition of civilian infrastructure,” Kimani said.

Israel has bombed civilian buildings, one of them being a 13-storey Jalaa Tower that hosted media houses, among them Al Jazeera and American-owned The Associated Press.

The Israeli Defence Forces claimed the building was being used by Hamas.

Ambassador Oded defended the bombing, saying the building acted as a Hamas Intelligence headquarters, and that they had given warnings for evacuation before bringing the tower down.

However, UN Secretary-General Antonio Guterres on Sunday said the destruction of media offices in Gaza is “extremely concerning”.

Guterres said journalists must be allowed to work free of fear and harassment.

He said fighting and artillery bombarding must stop immediately.

“This senseless cycle of bloodshed must stop immediately. All parties must respect international and human rights law,” Guterres said.

He said he was appalled by an attack on a refugee camp in Gaza, in which 10 members of one family were killed. The UN chief said humanitarian instalments must be protected.

But even as the UN boss spoke, an Israeli airstrike destroyed several homes in Gaza, killing 42 Palestinians, including 10 children according to health officials quoted by Reuters.

To give peace and dialogue a chance, Kenya said it opposed illegal settlements activity in the occupied Palestinian territory.

“It runs counter to established agreements and resolutions, and it inflames passions that run counter to successful negotiation for peace. It is also important that the agreed Status Quo on Jerusalem be respected,” Amb Kimani said.

On this, Oded said the matter is a conflict on properties, which is being discussed in court.

“The hearings have been postponed because they were being distorted by Hamas group. We don’t want it to create friction,” he said.

Kenya noted that the “dark moment” calls for a renewed vision of peace, “built on the insight that the present course only leads to further destruction of lives and hope”.

It added that the people of Israel and Palestine deserve to live in peace, security and dignity.

Echoing the same, Ambassador Oded said that remains Israel’s objective, however saying Palestine has no control of its territory because of Hamas.

“Israel is killing Palestinians in Gaza, one family at a time. Israel is trying to uproot Palestinians from Jerusalem, expelling families, one home, one neighbourhood at a time,” minister Malki said on Sunday.

He said 200 Palestinians have so far been killed, third of them children and women.

“Some wonder why Palestine enjoys so much solidarity and support from so many nations around the world, and the reason is that these nations are informed by their own history, their own struggle for freedom and they know oppression they can see it,” Malki said.

He said Palestine freedom is the only path to peace, and since peace is the responsibility of the UNSC, helping attain their freedom is its legal and moral duty.

Maintaining pressure on Israel is the only viable way forward to achieve peace and end the conflict.
News
4 months ago

They say it is sad that powerful states like the US were supporting Israel for staging massive missile attacks.
News
4 months ago

Ambassador to UNEP Rose Makena said country aligns itself to the AU position.
News
1 year ago
by ELIUD KIBII Subeditor and writer
News
17 May 2021 - 10:58