•The Kenya National TB, Leprosy and Lung Disease programme said 41 out of 47 counties recorded a reduction in TB cases.

•Samwel Misoi, the deputy director of Public Health at the Ministry of Health, who coordinates the TB programme, said they suspect the use of masks, limited movement may have contributed the reduction. 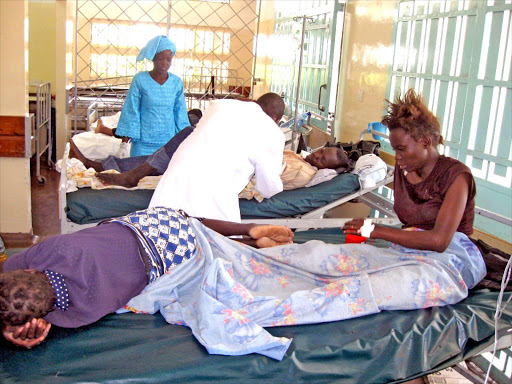 A file photo of TB patients in a Mombasa hospital

The World Health Organization says Kenya reported a reduction of 8.5 per cent new TB cases in 2020.

The drop is now the subject of speculation, with Kenyan health officials saying it was majorly due to health measures such as masks and hand washing.

The Kenya National TB, Leprosy and Lung Disease programme says 41 out of 47 counties recorded a reduction in TB cases.

But according to the WHO, people were getting sick but were unable to access hospitals during the lockdown.

WHO said it fears that globally, over half a million more people may have died from TB in 2020 simply because they were unable to obtain a diagnosis.

“The effects of Covid-19 go far beyond the death and disease caused by the virus itself. The disruption to essential services for people with TB is just one tragic example of the ways the pandemic is disproportionately affecting some of the world’s poorest people, who were already at higher risk for TB,” said Dr Tedros Adhanom Ghebreyesus, WHO director general.

“These sobering data point to the need for countries to make universal health coverage a key priority as they respond to and recover from the pandemic, to ensure access to essential services for TB and all diseases.”

The reduction was not unique to Kenya, the WHO says.

Countries with the biggest drops were Indonesia (42 per cent), South Africa (41 per cent), Philippines (37 per cent) and India (25per cent).

In March, Samwel Misoi, the deputy director of public health at the Ministry of Health who coordinates the TB programme, said they suspected the use of masks and limited movement may have contributed the reduction.

WHO suggested one way to address this is through restored and improved TB screening to rapidly identify people with TB.

New guidance issued by WHO aims to help countries identify the specific needs of communities, the populations at highest risk of TB, and the locations most affected to ensure people can access the most appropriate prevention and care services.

This can be achieved through a more systematic use of screening approaches that employ novel tools.

“For centuries, people with TB have been among the most marginalised and vulnerable. Covid-19 has intensified the disparities in living conditions and ability to access services both within and between countries,” said Dr Tereza Kasaeva, director of WHO’s Global TB Programme.

In recent years, Kenya has made significant progress in TB care. Between 2015 and 2019, Kenya reduced TB deaths by over 30 per cent and new cases by 20 per cent.