•Raila said they intend to move to the Court of Appeal with sobriety and with respect for our judges and courts.

•On Friday, BBI secretariat led by Suna East MP Junet Mohamed and former Dagoretti North MP Dennis Waweru hit out at the Judiciary over the ruling that they termed as judicial activism. 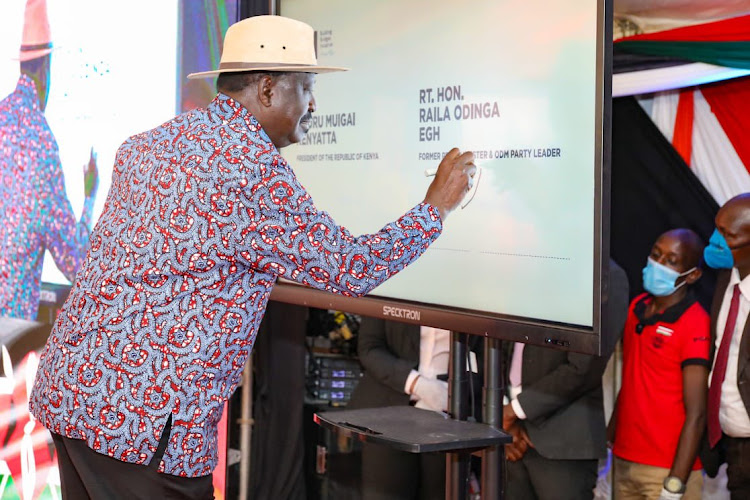 ODM leader Raila Odinga leads Kenyans in collection of signatures for the BBI process during the launch at KICC in Nairobi on November 25, last year
Image: COURTESY/ RAILA ODINGA

ODM leader Raila Odinga has broken his silence on the ruling by a five-judge bench of the High Court that nullified the BBI driven constitutional amendment process.

In a statement on Saturday, Raila, whose handshake with President Uhuru Kenyatta culminated in the proposed constitutional changes, expressed his disappointment with the verdict.

“Supporters of the Constitution Amendment Bill, including myself, have been disappointed by the High Court ruling,” he said.

The former Prime Minister said he respects the decision and urged the supporters of the drive to follow suit and restrain from personalized attacks on the court and its members.

He divulged that they will calmly and respectfully appeal the verdict that slammed brakes on the BBI train.

“We may disagree with the court but we must respect its ruling and its freedom to exercise its judgment as it understands the legal and constitutional matters before it,” Raila said.

Raila said they intend to move to the Court of Appeal with sobriety and with respect for our judges and courts.

On Friday, BBI secretariat led by Suna East MP Junet Mohamed and former Dagoretti North MP Dennis Waweru hit out at the Judiciary over the ruling that they termed as judicial activism.

They claimed the five Judge bench of the High Court made very personalized attacks against President Uhuru Kenyatta.

“This was a very deliberate design to plunge the country into a constitutional crisis and chaos through judicial activism,” Junet said.

This is after the bench led by Justice Joel Ngugi on Thursday scuttled the BBI process, terming the entire process to amend the Constitution illegal, null and void.

“A declaration is hereby made that the entire BBI process culminating with the launch of the Constitution of Kenya Amendment Bill, 2020 was done unconstitutionally and in the usurpation of the People’s exercise of Sovereign Power,” reads the judgement in part.

However, on Saturday, Raila appealed for sobriety and restraint as they seek redress in the higher court.

“The Judiciary sits at the centre of the democratic experiment in both established and emerging democracies. It is the judiciary, among the three arms of government, which is the final arbiter of our constitution,” he said.

“That is why every citizen and institution within the state must respect the rulings of the judiciary, even when they are adverse to their interests.”

Raila said the BBI is a project of opportunity, equity, and equality for all.

The drive, he said, seeks to a country of strong institutions and where citizenship means the ability and opportunity to realize one’s full humanity.

“That is our quest as we seek a second opinion on BBI from the Court of Appeal. Let us treat each other with dignity as we do so. After all, Kenya belongs to us all,” he said.

“Our destination is a place where the potential of every one of us – no matter our gender, ethnicity, race, religion, region, identity, origin, or social status – is a full member of our society.”