The comprehensive ruling throws the commission into limbo, renders it dysfunctional. 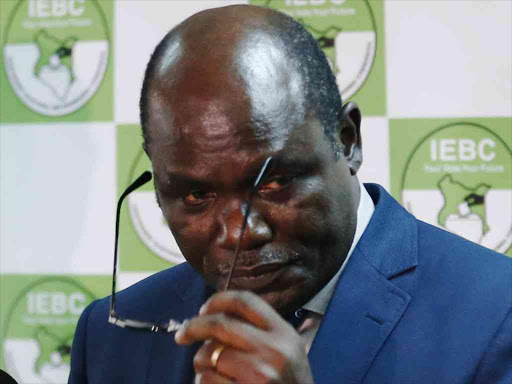 ON THE SPOT: Chairman of IEBC Wafula Chebukati on April 20, 2018.
Image: JACK OWUOR

The High Court ruling that declared the electoral commission as not properly constituted to conduct business could open the pandora's box for the IEBC.

There are fears that the Independent Electoral and Boundaries Commission could face a litany of litigations, with people likely to challenge some major decisions made in the last three years.

Decisions made in meetings that require quorum but were made by only three commissioners could  be overturned, including procurement and budgetary approvals.

The IEBC has also conducted several by-elections. Next week, it is scheduled to oversee by-elections in Bonchari and Juja.

A five-judge bench on Thursday night erected legal roadblocks on the commission after it ruled that at least five commissioners-and not three-are required to make quorum.

There are currently only two commissioners in office -Boya Molu and Abadi Guliye - and chairman Wafula Chebukati following the hasty resignation of their three colleagues in 2018 and one in 2017.

Former commissioner Roselyn Akombe who resigned in 2017 hailed the court ruling saying the Judiciary remains the last line of defense for the protection of the rule of law and constitutional order.

"No quorum," she tweeted in reference to the stinging indictment on the commission.

The constitutional court found out that the lack of quorum as set under the law significantly handicaps the commission from conducting key business, throwing IEBC into limbo.

“The Independent Electoral and Boundaries Commission (IEBC) cannot conduct any proposed referendum because it has no quorum.The quorum for the conduct of business by the IEBC is five commissioners,” the court ruled.

The net effect of the ruling, lawyers argue, would mean that some of the decisions the commission has made including those on policy and administrative issues could be the subject of court battles.

Also at stake given the court ruling is the commission's decision about multi-million-shilling procurements that have a bearing in the 2022 General Election.

Political risk analyst Dismas Mokua said the commission is now handicapped unless it seeks orders to stay the judgment.

“The commission faces a lot of legal headwinds that could hamper preparations for the 2022 General Election. It would now require that most of the decisions be put in abeyance until more commissioners are recruited,” Mokua said.

The process to hire the new four commissioners was kicked off two weeks ago with the selection panel already in place.

The Judiciary remains the last line of defense for the protection of the rule of law and constitutional order!

Lawyers opine that the courts, when summoned to make a determination in such cases challenging IEBC decisions, would have to establish if quorum hitches fundamentally impacted negatively on decisions.

Asked if the by-elections that have been held in the past under the Chebukati team risk being overturned in court, constitutional lawyer Charles Kanjama said that would not be possible altogether.

He said the principle of necessity which had its precedent set by the Supreme Court would have to apply in case where some decisions by the commission were bound by statutory timeliness.

“There is precedent set by the courts when the Ethics and Anti-Corruption Commission was not properly constituted and several cases were overturned when it was deemed that lack of quorum fundamentally hampered decisions,” Kanjama said.

He said that the only applicants who can be allowed to pursue justice based on the court's ruling would be those who already have active cases in court and those likely to move to court after the forthcoming by-elections.

“There are rigid constitutional timelines that you must lodge petitions within a certain time. If you have not lodged within that time you can't go to court and get a hearing,” Kanjama said.

He went on: “Those who are elected are safe, except the recent one in Garissa that risk being overturned.”

However, the IEBC could pick some of the judgments targeting it in Thursday's ruling and lodge an appeal.