• The president, government or any state organ cannot initiate a popular initiative to amend the Constitution.

• The attempt to distribute Constituencies in the BBI Bill is unconstitutional as it usurps the powers of BBI. 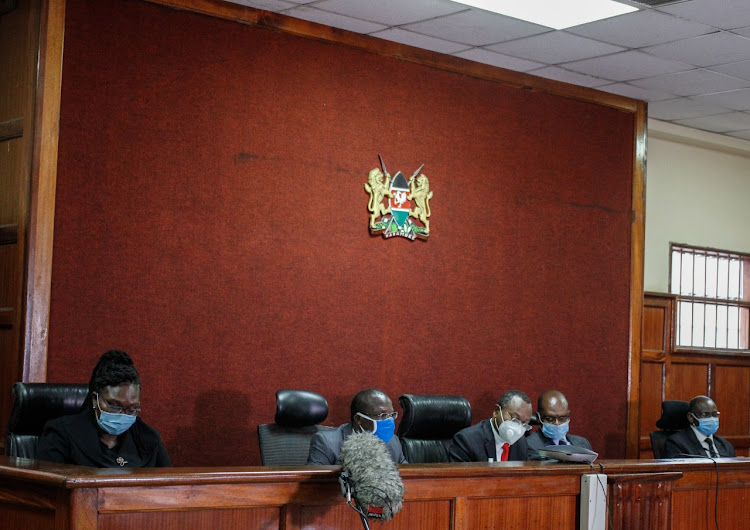 A five-judge bench of the constitutional court on Thursday poked holes in the Building Bridges Initiative sponsored constitution amendment process.

In a move seen to defend the constitution and sovereignty of the people of Kenya, the judges shredded the process to the extent of terming the BBI Steering Committee unconstitutional.

Judges Prof Joel Ngugi, George Odunga, Jairus Ngaah, Teresia Matheka and Chacha Mwita said President Uhuru Kenyatta does not have the power to directly initiate constitutional amendment under the law since parliament is the only organ with that power.

If that is allowed it will mean he would be granted the role of promoter and referee, the judges noted.

He can however through the AG use Parliament to initiate the process, they said.

“It is our finding that popular initiative is a power reserved for Wanjiku neither the president or any other state organ can utilize article 257 to amend the constitution,” said the judges.

“Kenyans intended that the essence of constitutional order they were bequeathing themselves sin 2010 would only be changed in the exercise of primary constituent power that is through civic education, public participation, constitutional assembly plus a referendum and not through secondary constituent power which is through public participation and referendum only.”

The upshot is that the text structure history and context all read and interpreted decreed by the constitution is that basic structure doctrine is applicable in Kenya.

The 18 chapters which form the basic structure of the constitution outlines a system of governance Kenyans chose. It includes also important areas such as land and environment, national security and public finance.

This means, they said, the chapters cannot be amended without the primary power of people but that does not mean every clause is inoculated. 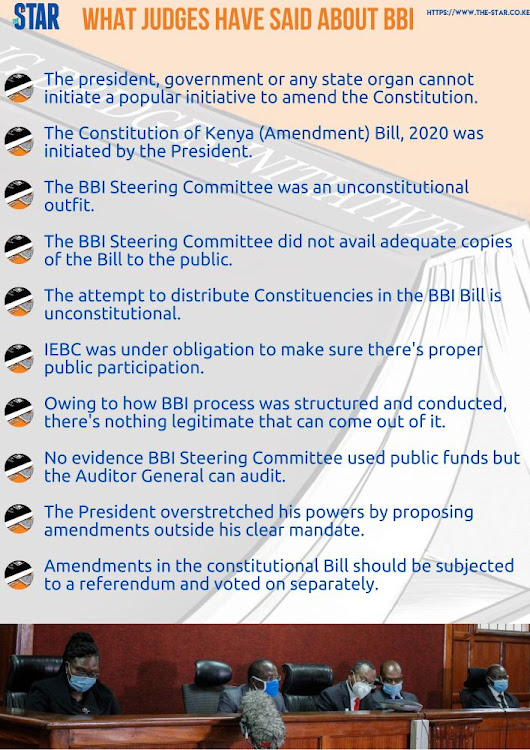 The judges also looked into whether the BBI steering committee is legal and, in their finding, noted that the President did not comply with the law in creating it and as such it is unlawful.

They noted that what has been presented in reality is the president’s initiative and to the extent, it was created to perpetuate what is clearly BBI team is unlawful.

The BBI team also did not print the BBI in Kiswahili for the common mwananchi to read which even if distributed to the public means those who did not understand English were left out.

The principle of public participation, they noted, is very key and that citizens should and must be given information and there is an obligation to produce copies of the bill in languages people understand for the citizens to make an informed opinion.

And the absence of this is a constitutional flaw, they ruled.

BBI steering committee failed to give people information and sensitize them prior to collecting signature which makes the process unconstitutional, the court said.

On the question of whether IEBC, county assembly and national assembly have a legal framework to proceed with the mandate, the judges said.

"It is our view election act being relied on by state does not cover adequately the process of the referendum because, for example, it fails to address important issues such as the public participation. We disagree that legislature has enacted statutes to deal with issues of the referendum.”

The provisions of the Elections Act alluding to a referendum is not a Referendum Act, they said.

Notwithstanding the absence of enabling statute referendum may be undertaken in compliance with national values of good governance espoused in article 10 of the constitution, the judges held.

“The only purpose for consideration of constitutional amendment bill is proper understanding and views of public gathered to either approve it or reject the bill. In other words, the national assembly has to either to spit the bill or swallow it wholly.”

“…To lump all proposal together as an omnibus bill for the purposes of either laundering the whole bill is not permissible under our constitution. Not only does such a scenario lead to confusion but it also denies voters the freedom of choice.”

On the issue of distribution of the proposed additional 70 new constituencies and the amendment bill providing for that, the court said are unlawful

This is because the amendment bill, they said, directs the IEBC on its constitutional mandate and ignores key due process in the delimitation of boundaries namely public participation and impose timeliness

Also, it takes away the rights of those aggrieved to challenge the delimitation.

They noted that IEBC is independent and ought not to be directed on what to do on how to do and when to do on the newly created constituencies.

They pronounced the amendment bill as unconstitutional.

The procedure and process used to create apportion the new constituencies is an attempt to amend the constitution by stealth and if allowed it will create a loophole through which basic structure of the constitution without triggering the primary constituent power.

On the issue of whether the IEBC did its work by authenticating the signatures in support of the amendment bill, the court said the commission did not do its work well.

No doubt that IEBC takes its role in voter verification more than ceremonial and it should apply the same seriousness with authentication and verification of signatures for the initiative to amend the constitution, the court held.

The administrative procedures by IEBC, the court said, are invalid due to lack of public participation, they are in violation for want of parliamentary approval and developed without a quorum.

Holding a referendum without conducting voter registration will violate the rights of citizens who have not registered to take part in the exercise.

Their decision comes a week after lawmakers gave the BBI a clean bill of health with an overwhelming vote in support of the first amendment.

MPs for the first time attained the required two-thirds majority to vote on a bill to amend the constitution.

At least 320 members participated in the vote at the second stage where 235 supported the bill, 83 for No while two abstained.

Their judgment arose out of seven cases filed against BBI.

Their case is aimed at stopping BBI from going through.

The cases seek to challenge, the content of and the process by which the constitutional amendment Bill was formulated and the steps that have been and are intended to be taken in an effort to amend the constitution.

The parties say the contents and process violate the constitution.

On March 18, 2018, Uhuru and Raila had a handshake. They had come out of bitterly fought presidential election.

After the famous handshake, the President formed a committee to come up with proposals for lasting unity in the nation.

The committee came up with BBI.

The petitioners now say that since 2013, Parliament through various Bills (some debated, others not) has been repealing the Constitution under the guise of amendments.

The activists had asked the court to make a declaration that Parliament cannot pass any laws that alter the basic structure of the constitutional foundation.

The chapters that form the basic structure of the Constitution include the Legislature, Executive, Judiciary and the Bills of Rights. These chapters entrench sovereignty.

In their view, many of the chapters have been tinkered with and there's a need to renegotiate the social contract.

For example, the clamour to have the loser of a presidential election back in Parliament as leader of the Opposition would amount to a change of the structure of the Constitution, they argue.

They are afraid that if the court does not address their concerns, there is a high likelihood the Constitution would be violated.

The 2010 Constitution is a product of a long struggle by Kenyans and embodies their will that must be safeguarded in the present and future, they said.

They argued that the amendment powers reposed in Article 256 and 257 do not extend to the power to destroy the Constitution. They also give no entity power to establish a new form of government or enact a new constitutional order.

And for this reason, they asked some critical questions which required the court to pronounce itself on.

Among the questions is whether specific chapters that form part of the basic structure of the Constitution can be amended by Parliament or through the popular initiative? Is there an implied limitation to powers of constitutional amendments?

Through lawyer Nelson Havi, the activists had said they foresee a danger that in the absence of clear guideposts to define the scope of Parliament’s authority to amend the Constitution, the House believes it enjoys an unlimited authority to change the law willfully.

During the hearing, ODM party leader Raila Odinga told the bench that the cases challenging the proposed changes of the constitution through the BBI are an afterthought and one made in a bad fair.

Raila together with the BBI National Secretariat disagreed with arguments by Ndii and four activists that five chapters of the 2010 Constitution -Chapter One, Two, Four, Nine and 10 -cannot be amended either through Parliament or a popular initiative.

Through lawyer Paul Mwangi, the former Prime Minister and the Secretariat co-chairman Dennis Waweru said the constitution is not a rigid document and can be amended at any time as the need may arise at any given point.

“In the event that the framers of the Constitution did not intend to have it amended, nothing could or indeed have barred them from having such an express provision in the constitution,” said Waweru in his response. He cited Chapter 16 titled ‘Amendment of This Constitution’.

Raila further told the court that the cases are not aimed at achieving the ends of justice but are ‘merely’ aimed to achieve political ends and motives.

While urging the five-judge bench to dismiss the cases, Raila said the petitions are an abuse of the court process and an invitation of the court to encroach on the legislative mandate of the National Assembly, County Assemblies and the Senate. Hence, the petitions offend the doctrines and principles of separation of powers.

He argued that the petitions offend the political question doctrine because the petitioners want the court to ‘encroach and substitute the views of the Legislature, the Executive and the people of Kenya’.

According to him, the cases are also fundamentally defective because the petitioners have made generalized assertions and allegations without providing supporting evidence.

“No harm or prejudice has been demonstrated in any of the petitions and none of the petitioners has adduced any such evidence of violation or contravention of the law to warrant the inference and involvement of this court in the constitutional amendment process,” he said.

He also questioned why the petitioners failed to challenge previous attempts to amend the constitution, including the Punguza Mzigo Initiative by 2017 presidential poll loser Ekuru Aukot and Okoa Kenya Movement by opposition alliance CORD.

“The petitions are a mere afterthought as the petitioners are selectively seeking to exercise their fundamental rights and freedoms to the detriment of the Respondents in light of the fact that there have been several attempts to amend the Constitution and none of the petitioners ever sought to challenge or dispute the said past processes,” he said.