• Among those being considered as possible successors of Owino include the current NPS deputy spokesman Charles Kosgey and Trans Nzoia County police commander Fredrick Ochieng, officials aware of the developments said.

• Owino has been defending police actions and ensuring the personnel had the needed working morale. 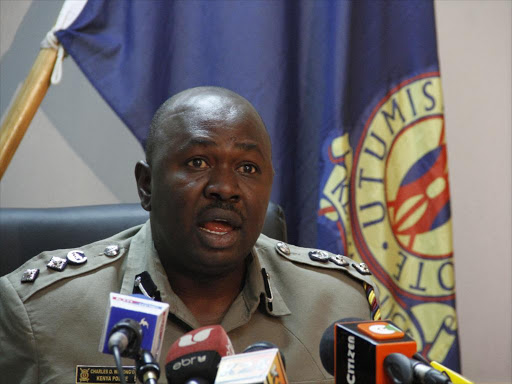 The National Police Service (NPS) spokesman Charles Owino has been transferred in the latest changes announced by the Inspector General of Police.

The service is shopping for a spokesman after Owino was on May 8, 2021, moved to the Kenya National Focal Point on Small Arms and Light Weapons (KNFP) and named the deputy director.

Among those being considered as possible successors of Owino include the current NPS deputy spokesman Charles Kosgey and Trans Nzoia County police commander Fredrick Ochieng, officials aware of the developments said.

The KNFP was established in 2003, establishing a focal point secretariat with a focal point committee bringing together government and civil society.

The committee is made up of representatives from a wide range of government ministries and departments, as well as civil society representatives, and international agencies which are charged with the responsibility of coordinating all of Kenya's actions on small arms - led the process of developing the National Action Plan.

The office of the spokesperson is crucial as it carries the weight of image, perception and faith in police operations.

Owino has been defending police actions and ensuring the personnel had the needed working morale.

And coming at a time when the country is facing general elections and referendum campaigns, the next spokesman will be crucial in keeping the image of the service positive.

The changes come two months after Owino declared he was interested in becoming the next governor for Siaya County.

His friends said they believe he was moved because of his announcement on politics, which did not auger well among some senior government officials.

Owino was in 2015 in charge of security at Kisumu County government, where he had been moved from Ndhiwa the previous year.

Before then, he had served as the Officer Commanding Police Division (OCPD) for Njoro since mid-2013.

Owino was the second director of communication in NPS under the new dispensation, which started in 2012 whereby both the Kenya Police and Administration Police Service were put under one command of the IGP.

The first one was the current Director of Directorate of Criminal Investigations George Kinoti who assumed the position in 2013 up to 2018.