A host of senators have been pushing to amend the document

•President Uhuru Kenyatta and ODM boss Raila Odinga face a litmus test as senators vote on the Constitution of Kenya (Amendment) Bill, 2020 amid push to amend the document. 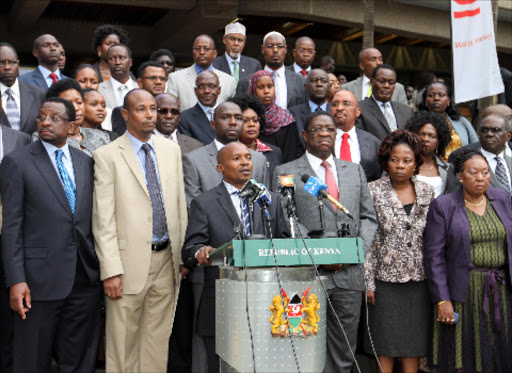 Leader of majority in senate Kindiki Kithure speaks with other Senators at a press conference at the steps of KICC
Image: MONICAH MWANGI

President Uhuru Kenyatta and ODM boss Raila Odinga face a litmus test as senators vote on the Constitution of Kenya (Amendment) Bill, 2020 amid push to amend the document.

According to the schedule of business for Tuesday, the legislators are expected to take two votes on the bill – in the second reading and the final one in the third reading stage.

But before the vote, Speaker Kenneth Lusaka is expected to make a landmark ruling on – whether the lawmakers can change the bill in what may shape the voting pattern.

“At second stage, there are no amendments that have been proposed. I will make a ruling when the bill gets to Committee of the Whole House. I am not a speaker by chance. I will give a researched and detailed ruling,” he said.

Lusaka will make a determination on whether the senators can change the ‘unconstitutional and undesirable clauses as well as typographical and referential errors in the bill before the senate.

A host of senators are clamouring to amend the bill, with three officially writing to the speaker recommending a raft of changes – creation and distribution of 70 additional constituencies being the elephant in the room.

Speaker says question on whether sections of the Bill are unconstitutional is premature.
News
6 months ago

“I hold the view that Parliament can’t be gagged when it comes to a constitutional amendment Bill. We can't declare sections of the Bill unconstitutional and still go ahead to pass on the same unconstitutionality to the people. Why did they elect us?” Wambua, an ally of Wiper leader Kalonzo Musyoka, posed.

Last Thursday, members of the National Assembly passed the bill with an overwhelming majority after speaker Justin Muturi earlier ruled out any possibility of parliament amending the bill.

During the debate on the floor that enters its third week today, several other senators, including allies of the ‘Handshake’ partners demanded to change the document arguing that Parliament’s role cannot be ceremonial.

Orengo, Wetangula and Omogeni have questioned the criteria used to allocate the proposed additional 70 constituencies.

“I want to urge the (Justice and Legal Affairs) committee we expect in committee stage to see you bring amendments to this bill. And let nobody frighten you that you can’t amend. You can amend,” Wetangula said during the debate last week.

The trio said most regions, including Odinga’s political bedrock like Nyanza, Western and Coast region were short-changed in the allocation of the electoral units.

Wetangula added that the speaker should move with precision and clarity to give the House direction because ‘there concerns about certain issues in the Bill that can create problems. ‘

“I want to respectfully submit that a process of legislation, particularly on a Constitution, is supposed to solve problems and not to create problems. We need to see if we are creating a problem for the future or not,” he reckoned advised.

“Kakamega County has one of the biggest populations. Explaining how Kakamega is getting two constituencies is a bit of a problem if you are using a scientific process,” Orengo said during the debate on the bill.

They said parliament’s role cannot be ceremonial in any legislation, including constitutional amendment through a popular initiative as provided for in Article 257 of the Constitution.

The growing resistance and push to change the document now poses a serious test for Uhuru and Raila ahead of the crucial vote.