•There are assertions the feud stems from long-standing ideological differences between the ODM leader and Orengo.

• The immediate cause of dissention is BBI and Orengo and his allies' call to amend the  existing Bill's aspects considered unconstitutional. 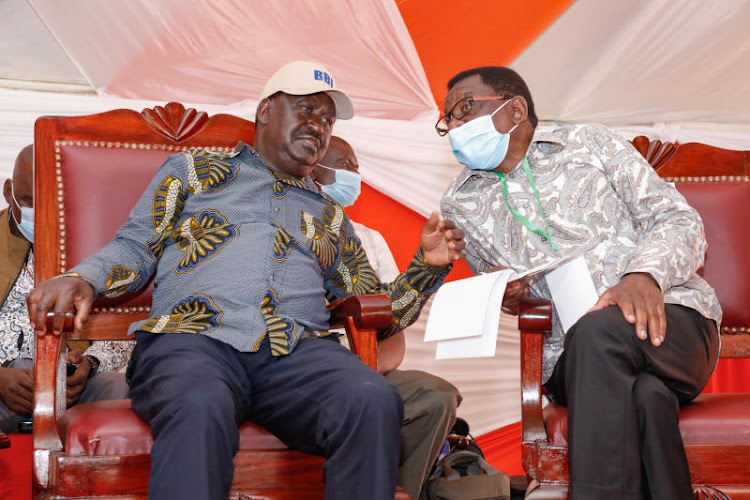 ODM leader Raila Odinga has moved to crush dissent in his Nyanza backyard, gunning for Siaya Senator James Orengo in what could tear the party apart.

Otiende and Orengo are ideological soulmates and have lately raised questions about the BBI process — they want to see amendments— that have rubbed Raila and his inner circle the wrong way. Otiende even said the proposed 70 new constituencies are unconstitutional.

The two have the backing of some Nyanza lawmakers, mostly lawyers who seem to have recoiled as Raila began to mercilessly crack the whip.

On Tuesday evening, there was speculation ODM could also axe Orengo as Senate Minority leader, but no Orange party officials could, or would, confirm this.

Otiende was replaced in the committee, which deals mainly with constitutional matters and elections, by Ruaraka MP Tom Kajwang’ — an unwavering  Raila ally who presided over the ODM leader’s January 2018 mock swearing-in.

The removal caused further disquiet in the party that progressive individuals around Raila were being undermined and diminished. The move exposed the dysfunction in ODM as senior party officials said they were in the ark about Otiende.

“It cannot be true,” he told the Star. “We don’t do that in ODM. That is not true. We don’t victimise people for their statements of conscience. I also differ in opinion from time to time. It is healthy that way.”

He went on, “We are a social democracy, we are not robots. I don’t expect anybody would make that move.”

But by the time Bosire spoke, ODM national chairman John Mbadi had formally made the announcement in Parliament.

Former ODM director of strategy Wafula Buke said the crisis facing ODM was because some people around Raila are only keen on financial deals.

"[Removing] Otiende Amolo — considering his input during the Supreme Court petition against rigging and considering the fact that he is among the few clean people the party has — would require the wisdom of the party as I know it. This matter should be discussed in the Central Committee at the very least,” he said.

Otiende and Orengo led the battery of lawyers that successfully argued for the Supreme Court to nullify President Uhuru Kenyatta's election in 2017.

Signs of trouble for the Orengo wing began to emerge in the open last week.

Raila’s spokesman Dennis Onyango had referred to some unnamed leaders as “demagogues known only for discussing politics in flawless English and legal jargon on the floor and public rallies”.

His take was that Raila has changed strategy from combative politics and the Orengo wing was determined to drag the party back to battle.

On Tuesday, Otiende said he would take the "unpleasant change of circumstances" calmly.

"The vicissitudes of politics. So, the schemers want me out of JLAC. I will take it in grace and stride,” the Senior Counsel said.

Speaking to the Star, Mbadi, who is the Minority leader of the National Assembly, said Otiende was being replaced with Kajwang’ for failing to toe the party line in the committee.

“If the position of the party is stated and he is opposed to that position and he is the vice-chair of JLAC courtesy of ODM, what is the issue there?” he asked.

“We are telling him he is probably not the best fit for us. We put him there because we want him to push the party agenda,” the Suba South MP said.

Mbadi said the party position has been well-articulated, but the lawmaker has not taken it up.

“If he is not pushing the party agenda in JLAC, why should we continue having him? There is nothing mischievous in the changes. We are not punishing anyone,” he said.

“Does unity mean you go against what the party wants? We are just saying that Otiende is not the best for us in JLAC. We will take him elsewhere,” he added.

Why Raila’s party is in turmoil

On whether Orengo was next, the ODM chairman said the party has not held a meeting to take a position on the Siaya senator.

Otiende, seen to be one of the most eloquent debaters, had earlier taken a dig at Mbadi, telling him to be quiet since he lacked legal training.

“John Mbadi, you have not stepped into a law school, so just allow me,” Otiende said in Parliament, explaining why the proposed 70 constituencies are unconstitutional.

Former Ndhiwa MP Agostino Neto, who was in a group of youthful MPs that rebelled against the party ahead of the 2017 elections, said the developments are typical of ODM.

“It simply shows ODM for what it is, where brains don’t matter. It appears you cannot give an honest opinion on serious national matters,” the United Green Movement leader said.

Eliud Owalo, a former aide to Raila, said, "Progressive forces cannot survive and will never have space in ODM.

"ODM as a party is a conformist operational environment in which progressive forces like Orengo and Otiende Amolo cannot survive in a sustainable manner. The duo should pursue more viable options while the window of opportunity is still open," Owalo said.

ODM has been in turmoil following the position taken by some of its bigwigs concerning amendments to the BBI Bill before it leaves Parliament for the referendum.

Senator Orengo, Otiende and Nyamira Senator Okong’o Omogeni have maintained that certain "unconstitutional" clauses of the Bill should be amended.

Orengo poked holes in several sections of the BBI Bill, further questioning the goodwill to implement its progressive provisions.

Otiende also challenged the constitutionality of some provisions in the Bill, which is at its second reading in the National Assembly.

He said an amendment can be unconstitutional if it does not follow the process that's already in the current Constitution before it is amended, or if it  results in something that does not accord with constitutionalism.