• Judge Sergon in his explanation he said though the case was initially that of murder, it was reduced by the state to manslaughter.

• With that in mind coupled with the number of years the suspect had already served behind bars, he said, he then opted to release the person so that the parties can reconcile. 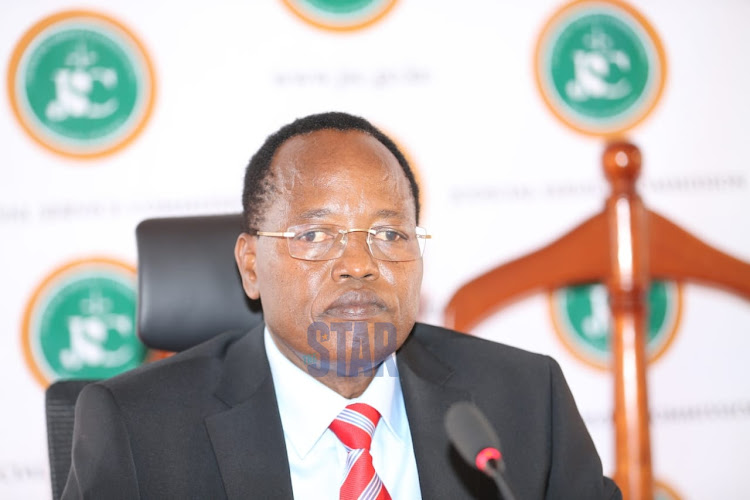 Justice Sergon Joseph Kiplagat during the Judicial Service Commission interview for the position of Supreme Court Judge on May 5, 2021.
Image: FREDRICK OMONDI

High Court Judge Joseph Sergon was on Wednesday put to task to explain why he set free suspects in murder cases for them to go through a traditional cleansing ceremony when the law on reconciliation does not apply to felonies.

Judge Sergon in his explanation he said though the case was initially that of murder, it was reduced by the state to manslaughter and he convicted the suspect of that offence and what he was left to deal with was a sentence appropriate to be meted out.

“Where the offence of murder by virtue of an agreement between the state and suspects agreed to have it reduced to manslaughter so having convicted them of manslaughter what kicks is now is the sentence...which is the appropriate sentence,” he said.

Justice Sergon said he did ask for reports from the provincial administration, victim’s family, family of the accused person and community at large to enable him to reach a decision.

And from the report in the case, the parties said they had reconciled and even prepared a Kipsigis customary cleansing ceremony with a view of compensating the family of the deceased.

With that in mind coupled with the number of years the suspect had already served behind bars, he said, he then opted to release the person so that the parties can reconcile.

The question by JSC commissioner David Majanja arose out of a complaint filed against justice Sergon by the Kenya Human Rights Commission and ICJ.

Commissioner Macharia Njeru who also grilled the judge noted that the judge had developed a pattern of releasing murder suspects on grounds that they go through traditional customary cleansing which has the potential of creating anarchy.

The judge in response said he had looked at the fact that the people involved were held in custody for a very long time and given that the community wanted the people to be released back to them he opted to release them to create community cohesion.

In his defence, he said he is dynamic and that will not be a trend if he is given the opportunity to be a Supreme Court judge.

His judicial philosophy is opening access to justice to marginalised communities, children and women.

In a collegial court, he hopes to hold discussions with fellow judges and where opportunity presents itself to write individual judgements and will bring out his judicial philosophy.

Given the opportunity, he said he will learn the ropes quickly on how to work in a collegial court.

On the issue of corruption in the Supreme Court, Justice Sergon said he will hold discussions with his colleagues to come up with communication mechanisms.

“I would wish to persuade the court to look at reports on corruption and then ask ourselves if it is a question of real corruption or perception,” he said.

The judge successfully defended his PhD thesis on February 26, 2021.

Currently, he is serving in the High Court in the Civil Division and was recently appointed member of the task force steering committee of alternative justice.

While in private practice,  Justice Sergon represented the Ogiek community who were being evicted from Mau forest.

Although some were encroaching into the forest and were evicted and they went to African Court and their issue was resolved.

He participates in community work by paying school fees for the underprivileged.

Justice Sergon also does feed elderly people in his community on a weekly basis where researchers also come on board and conduct cultural studies.

He has been able to serve in his court and serve in two committees.