Ouko however said he doesn't have a remedy he can tell the JSC to use.

• Appeal Court Judge William Ouko said the issue of tribalism is a dangerous disease affecting the nation which even the Judicial Service Commission suffers from.

• He also suggested that the Supreme Court needs to review its performance and discuss the perception of corruption allegations against it. 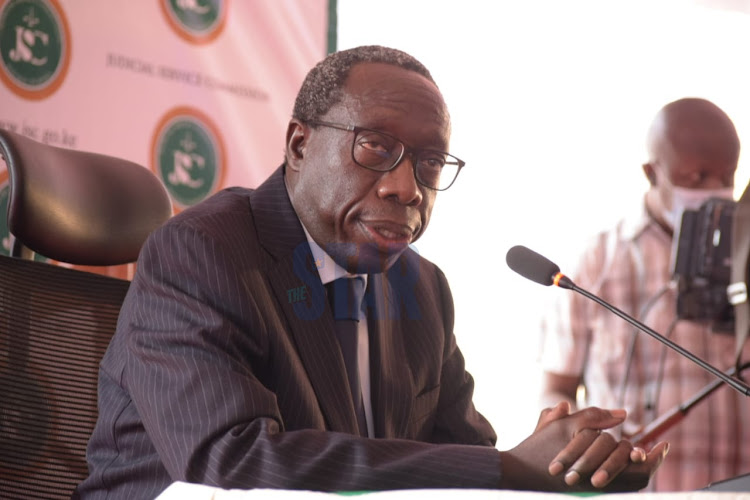 Appeal Court Judge William Ouko on Wednesday said the issue of tribalism is a dangerous disease affecting the nation which even the Judicial Service Commission suffers from.

“Diversity, ethnicity, it's our turn to eat is a very dangerous disease and people say in our region…I really don’t have a prescription. All I know is we are very deeply tribal even in this commission,” he said while answering questions during the interviews for the supreme court judge position.

He made the remarks while answering questions from JSC commissioner Felix Koskei who asked what can be done to remedy the issue of tribalism and people wanting their ‘own’ to be hired.

Justice Ouko though acknowledging the problem said he does not have a remedy he can tell the JSC to use.

He appealed for support for the Judiciary from other arms of government to enable it to function at the optimum level.

The Judiciary, he said, is retarded because of the way it is treated and for all the three arms to be able to mark together and achieve there has to be equity.

He gave an example of parity in even budget allocations noting that when Parliament gets Sh37 billion, Judiciary gets Sh17 billion which in turn makes the two not walk in the same status.

Judge Ouko noted the support needed for the Judiciary is not only financial, saying that currently due to the lack of judges, the Court of Appeal is not functioning to its optimum.

He also suggested that the Supreme Court needs to review its performance and discuss the perception of corruption allegations against it.

Judge Ouko said there is a need for judges to sit down and talk to see where the gaps are which has led the members of the public to believe that they are on the take.

In his view, if there were cases of real corruption other than perception, Ethics and Anti-Corruption Commission would have already stepped in.

He believes most of the perception is due to claims made when people lose cases.

“The work judges do cannot be equated to football matches because there is no draw as there will always be a loser and a winner. Losers will always look for excuses there has never been a specific case because we would have people before EACC and courts,” he said.

The judge further noted that there has been criticism in relation to the jurisprudence from the Supreme Court with some describing it as untidy though in his capacity he thinks the decisions of that court in most cases are well reasoned.

He emphasized the need for the court to introspect ten years since its inception saying it is important given that its decisions are binding on lower courts.

“It is important because the court being one whose decisions bind on the lower court it must be seen to give very clear instructions to lower courts,” he said.

However, he said he is disturbed by the language sometimes used in dissenting decisions of the Supreme Court which he believes should change.

He gave an example of a dissenting opinion in which a judge whom he did not name referred to the majority decision as ridiculous.

“You can’t use words such as ridiculous to describe majority decisions in your dissent. That's an area I will hope to change. We need to tone the language,” he said.

He assured the JSC that he doesn’t have a problem supporting the CJ nominee because they have had a good working relationship at the Appeal Court where he was the president.

And if given the chance to be a Supreme Court judge, Justice Ouko said, he will strive to reduce the backlog of cases and ensure the court becomes real-time.