• Police identified the Cameroonian suspects as Paulin Francis Proper, 44, and Njikam Omar, 37, found to be in the country illegally.

• The other was Job Kentong, 37, who holds a refugee identity card. 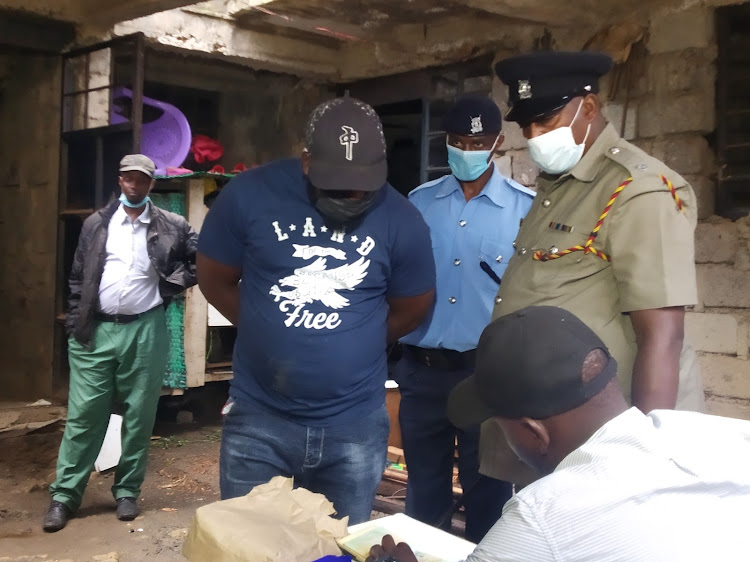 One of the suspects (in cap) being held by police officers at the scene in Ruiru on Monday, May 3, 2021
Image: John Kamau 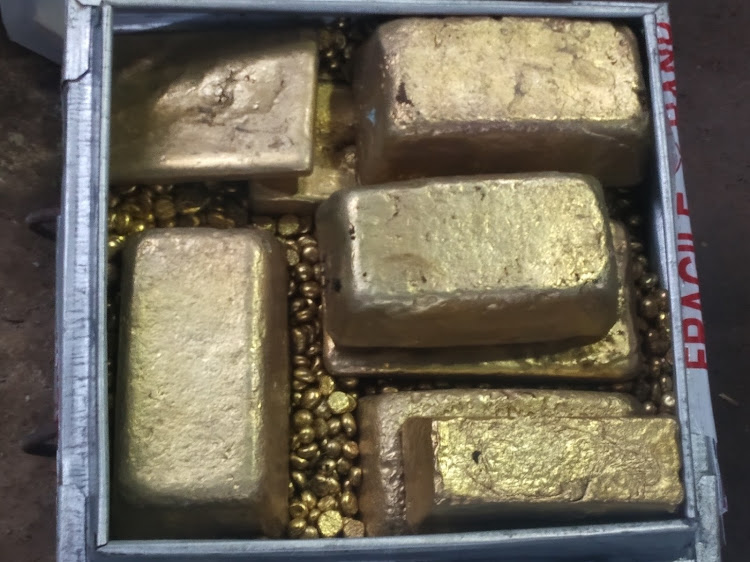 Detectives in Ruiru have seized more than Sh350 million in counterfeit currency and fake gold nuggets and bars and arrested three Cameroonians.

They also arrested a Kenyan woman in Muthaiga North and recovered a Glock pistol and 28 rounds of 9mm bullets from her. The raids were conducted on Monday.

The currency was in US dollars, British pounds and Kenyan shillings. The blue sack of ‘gold’ weighed more than 250kg.

Police identified the Cameroonian suspects as Paulin Francis Proper, 44, and Njikam Omar, 37, found to be in the country illegally. The other was Job Kentong, 37, who holds a refugee identity card.

They were arrested at BTL area in the outskirts of Ruiru town on Monday evening.

Paulin, who is the main suspect in the case, is the owner of the building where the cache was seized. He has been in the country for close to six years, a neighbour who sought anonymity told the Star.

Detectives recovered the money stashed in iron boxes and bags and assorted paraphernalia, including a dollar photocopying machine suspected to be used in printing the fake currency.

Upon further investigations, the detectives raided Paulin's residence in Muthaiga North and recovered the pistol.

They also recovered a firearm identity card and an expired firearm certificate with the names of Loise Kaguongo. 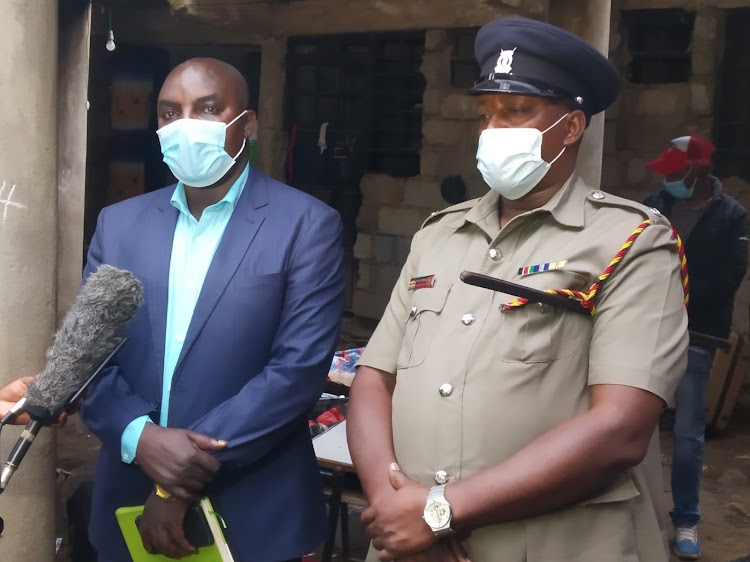 Kaguongo, a businesswoman operating over 10 mobile outlets, is suspected to be the link between the other three suspects and a fake cash syndicate.

“Our officers acting on intelligence that there were some foreigners perpetrating the fake money dealing in Ruiru raided the premises and managed to nab the cache and arrested the three suspects believed to be behind the illegal business,” Ombati said.

He said the premises, an unfinished building, seemed like a store that was being used by the suspects.

Investigations are in top gear to establish whether the suspects have another den where they print the fake cash, he said.

He added that detectives will also be investigating the fake money web to establish and bring to book other individuals who might be involved.

“The suspects in our custody will help us in our investigations and will help establish whether other previous fake currency cases that have been cracked in Ruiru are related,” Ombati said. 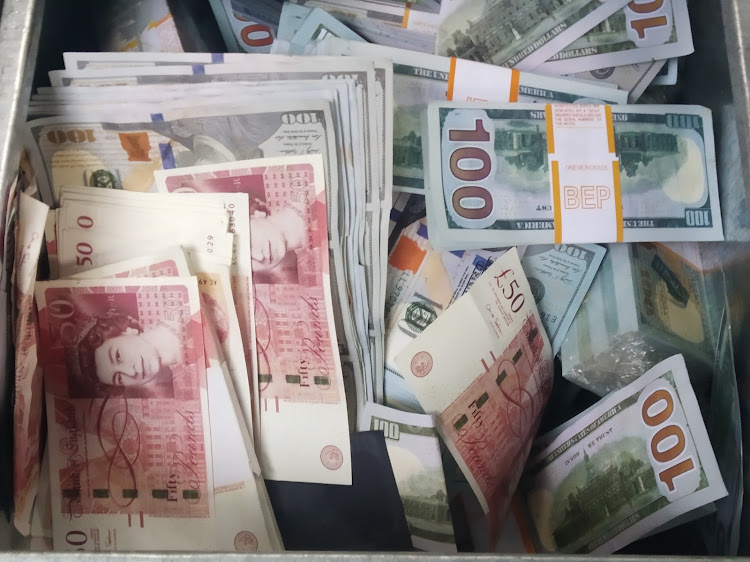 Some of the fake currencies seized from three suspects in Ruiru on Monday evening.
Image: John Kamau

This is the third fake money dealing case to be recorded in a week.

Two days ago police in Nyali, Mombasa recovered fake currency from two foreign nationals Jamil Salman, 43, and Tesfawork Ermias, 30, who were in the country illegally.

The duo had fake €198 notes in denominations of 100 which they had hidden between the drivers and co-driver's seat.

Also, sleuths raided an apartment in Kilimani, Nairobi, and arrested two men namely Samuel Maina and Boniface Mungai, who were in possession of fake currencies worth Sh750 million stashed in metal boxes. The money was in Kenyan shillings, Euro and US dollar bills.

Ombati said that detectives in the region have been working round the clock to dismantle cartels engaging in money laundering and fake money dealings.

“Such crimes [fake money dealings] have been managed in Ruiru. All other cases that happened before are well handled and the criminals have been prosecuted accordingly,” he said. 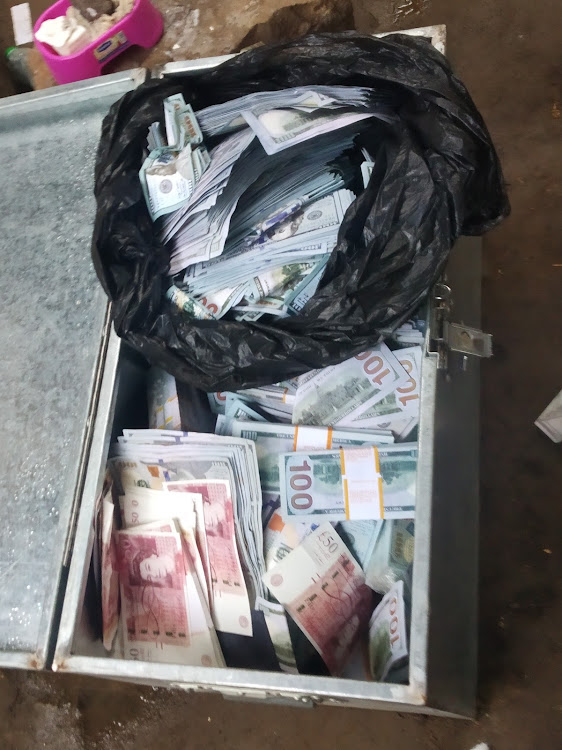 Some of the fake currencies seized by Ruiru detectives from three suspects on Monday evening.
Image: John Kamau

Ruiru detectives on February 27, 2019 raided another home in Kwihota village within Gatong’ora ward and seized Sh32.6 billion fake money which was in foreign and Kenyan currencies.

In June 2017 Central Bank of Kenya acknowledged the possibility of a transnational fake currency ring in Nairobi and the region.

CBK and other East African Community central banks held a joint meeting with the Eastern Africa Police Chiefs Cooperation Organisation in September 2016 to develop strategies for enhancing the fight against counterfeit crime.

The bank regulator had conducted a survey in 2017 that showed 97 per cent of fraud faced by the agents involved fake notes.