Examiners cry foul over unpaid allowances due at the end of the exercise.

• Kuppet criticised the Kenya National Examination Council for showing lack of respect to examiners "over and over again".

• The markers earn between Sh51 and Sh58 per script, but Kuppet wanted this raised by at least Sh50. 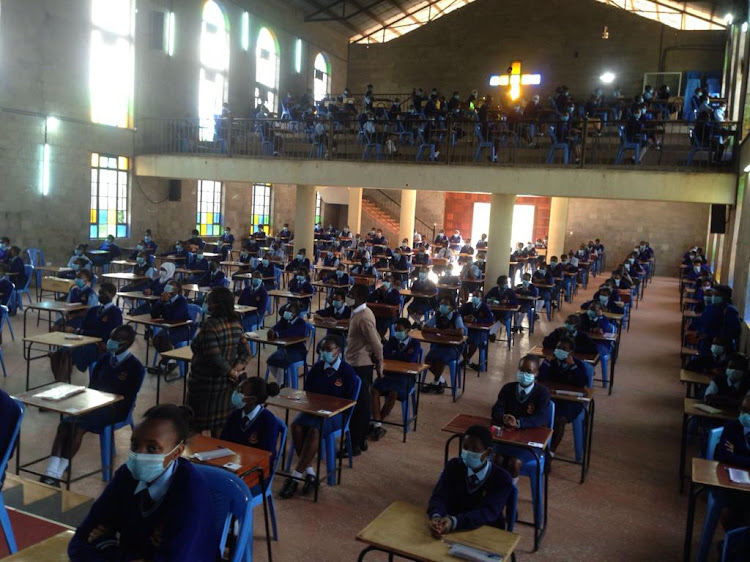 ALL SET: Students at Moi Girls School Nairobi ahead of the commencement of the 2020 KCSE exam
Image: LEWIS NYAUNDI

Marking of the Kenya Certificate of Secondary Education exam ended Tuesday with some examiners staging protests over their dues.

Marking started immediately after the exam was concluded on April 16. It involved at least 27,284 examiners and was conducted in about 33 national schools distributed in the eight regions, formerly provinces.

However, the process witnessed several complaints about poor pay and delayed allowances. Examiners at Moi Girls and State House Girls protested against unpaid allowances due at the end of the marking exercise. This drew the attention of a trade union.

The Kenya Union of Post-Primary Education Teachers, through secretary general Akello Misori, on Tuesday criticised the Kenya National Examination Council for showing lack of respect to examiners "over and over again".

The union had earlier asked for enhanced perks in the face of the hard times due to the Covid-19 crisis. The markers earn between Sh51 and Sh58 per script, but Kuppet wanted this raised by at least Sh50.

Misori told the Star that Knec had failed to address poor payment complaints despite the issue emerging every marking cycle.

“Examinations in this country are treated as a delicate process, but where does that coordination go when it reaches the paying of dues?” Misori questioned.

Knec is currently compiling results. Although marking has been completed, it is not clear whether results will be released by May 10 as earlier communicated by the Education ministry.

Schools reopen on May 10 and any delay means the results will be announced when learners are already back in school.

Knec chief executive officer Mercy Karogo on Tuesday said the matter had come to the attention of the council and was being addressed. She, however, declined to comment on the when results will be released.

Sources from the ministry said CS George Magoha was expected to present a brief of the results to President Uhuru Kenyatta at State House, Nairobi, on Friday, after which the results will be made public.

Announcement of the results will pave the way for admission to universities, colleges and technical institutions. Knec data show that 752,933 candidates were registered to sit this year's KCSE exam in 10,437 centres.