Treasury has allocated Sh135.2 billion to the legacy projects, being 30 per cent of FY19-20 Big Four budget

•Treasury says adverse effects of the pandemic have taken toll on the budget.

•Experts hold that Big Four may not be attainable by 2022 after the disruptions. 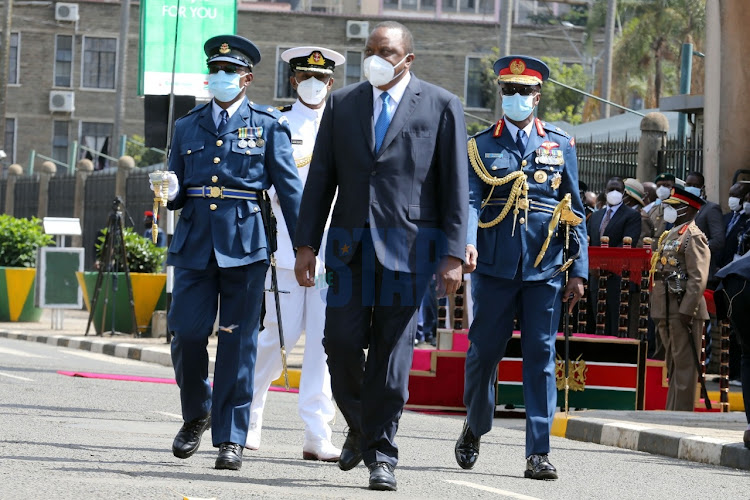 STATE OF THE NATION: President Uhuru Kenyatta arrives at the Parliament Buildings on November 12 to deliver the State of the Nation address.
Image: FREDERICK OMONDI

Treasury has allocated Sh135.2 billion towards the Big Four agenda in the proposed 2021-22 budget.

The allocation is a slight increase from the Sh128.3 billion allocated to the projects in the current financial year.

The current provision is although a steep fall if compared with the Sh450.9 billion allocated to drivers and enablers of the development plan in 2019-20.

The proposed allocation would bring to Sh1.12 trillion, the total amount of money that has gone into the projects so far.

The Big Four agenda is anchored on the pillars of food security, manufacturing, universal health coverage, and affordable housing.

However, with barely 15 months to the end of President Kenyatta's two-year term, there are concerns Jubilee may not achieve the intended milestones.

The President sought to create jobs and reduce poverty by growing the manufacturing sector’s share of GDP to 15 per cent by next year.

Initiatives that guarantee food security and improve nutrition to all Kenyans by 2022 were also lined up.

The President also pledged affordable healthcare to all Kenyans and 500,000 affordable housing units by next year.

However, owing to Covid-19, Jubilee slashed Sh54 billion— largely development funds— in favour of a post-pandemic recovery plan. An allocation of Sh26 billion is proposed for this year.

“Economic plans adopted prior to the outbreak of the pandemic were adversely affected,” Treasury CS Ukur Yatani said in the estimates’ memorandum.

In what could reveal the extent to which the virus has crippled the development agenda, the universal health coverage budget has been reduced by Sh2.3 billion.

Treasury, in the estimates tabled in Parliament on Thursday, has proposed Sh47.7 billion towards UHC from the current Sh50 billion.

At least Sh507 million will go into infrastructure support for hospitals; Sh80 million to Public Works department; Sh557 million for water; Sh409 million for ICT connectivity in health facilities and 580 million to connect hospitals to electricity.

Uhuru's administration has maintained allocation to the manufacturing pillar at Sh18.4 billion, for which the drivers would take up Sh5.1 billion.

The National Treasury will retain a chunk of the allocations at Sh9.8 billion for among others the capitalisation of the proposed Kenya Development Bank.

At least Sh100 million and Sh35 million will go towards mechanisation of livestock and mining respectively.

Treasury has, however, increased allocation for food security by Sh2 billion in the proposed Sh54.2 billion budget.

A chunk of the funds will be spent on crop development, which has been allocated Sh29.1 billion followed by irrigation and water supplies at Sh11.7 billion.

In the same vein, the Jubilee administration has allocated Sh7.8 billion for fisheries development; Sh2.5 billion for livestock; and Sh556 million, largely for dams under construction by the regional development department.

At least Sh14.8 billion has been allocated to the affordable housing plan with enablers taking up Sh13.2 billion of the budget.

Treasury is set to get Sh11.5 billion, part of which will be used to operationalise the housing fund, and the rest for infrastructure, water, and energy supplies.

Budget experts noted that the government has failed to meet the set targets for these projects.

The Parliamentary Budget Office, in its review of the current budget, said the projects were faced with challenges hampering effective project implementation.

The President, during the seventh state of the nation address, said "Big Four is not a project as many may think."

Is Big Four a myth or reality?