• Senior counsel Tom Ojienda asked the magistrate to compel the accused to dress properly as the court ethics demands on the dressing code of accused persons.

• Ogoti immediately advised the accused to log out of the virtual session and dress properly before logging in to follow the proceedings. 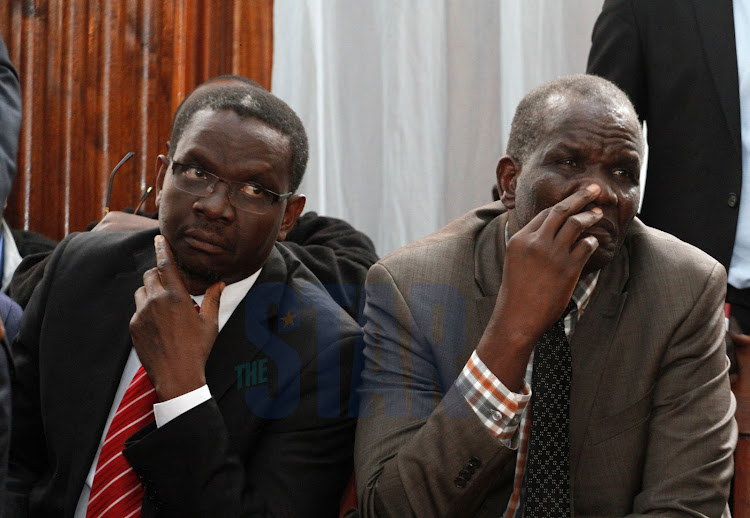 A Nairobi court was left in stitches during virtual court proceedings on Monday when an accused person showed up in a vest.

His mode of dressing prompted senior counsel Tom Ojienda to ask the magistrate to compel him to dress properly as the court ethics demands on the dressing code of accused persons.

Consequently, Ogoti immediately advised the accused to log out of the virtual session and dress properly before logging in to follow the proceedings.

In the same case, the court lifted a warrant of arrest against former Kisumu county assembly speaker Oloo.

Ogoti set aside the arrest order against Oloo after he presented himself in court and apologised for failing to appear on March 22.

"Since he (Onyango Oloo) presented himself to court and has offered an explanation, the warrant of arrest issued against him is lifted and [he is] warned to be very vigil on the next court proceedings," Ogoti said.

Oloo had been ordered to appear in court to face 11 new charges in the amended charge sheet filed in court by the office of the DPP but he did not take a plea.

This is after Ogoti appointed a new magistrate, chief magistrate Teresia Murigi, to hear two cases against Oloo and his co-accused charged with several counts relating to inflation of the cost of the Lake Basin Mall.

The magistrate, however, directed the parties in the case to appear before the new trial magistrate on Thursday for further directions on the two matters.

Oloo is accused of conspiring with contractors, including Zeyun Yang and Zhang Jing and directors of Edermann Property Limited, to defraud the public billions of shillings in the tendering for the construction of LBDA mall in Kisumu.

Edermann was accused of bribing Oloo, then the chairman of the LBDA board, with Sh17 million and other benefits, including apartments and shops.

In the first count in the revised charges, the court heard between January 21, 2013, and May 20, 2018, former LBDA managing director and board, consultants and main contractor conspired to defraud LBDA of Sh667,275,202 in the tender for construction, development and financing of the retail mail at Kanyakwar, Kisumu town.

Prosecutions say the accused persons conspired to inflate the cost of the construction of the mall from Sh2.5 billion to Sh4.1 billion.

The board members are also accused of approving the borrowing of Sh1.2 billion from Co-operative Bank, bringing the total borrowing to Sh2.5 billion.

According to the charges, the tender was awarded on March 14, 2013, and former LBDA boss Aguko and ex-chairman David Oyosi executed the agreement.

The case will be mentioned on May 6.