• Speaker Muturi said media owners' alliance with government and political interests have impeded the existence of a truly independent press in the country.

• He criticised media organisations for poorly paying journalists and failing to prioritise their welfare. 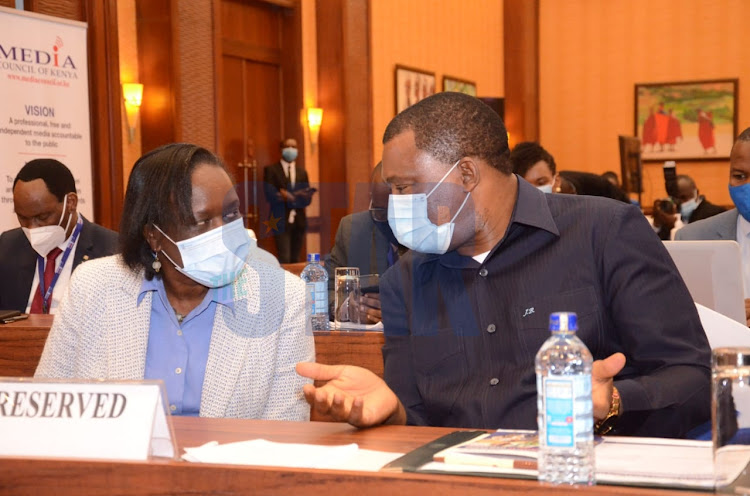 Poor payment of journalists, media owners' interests and the influence of business and political players are the main threats to press freedom, National Assembly speaker Justin Muturi has said.

Muturi said media owners' alliance with government and political interests have impeded the existence of a truly independent press in the country. The speaker spoke during an event to mark the World Press Freedom Day in Nairobi on Monday.

He criticised media organisations for poorly paying journalists and failing to prioritise their welfare.

Sometimes, he said, the reporters are not well facilitated to cover assignments, exposing them to situations that are likely to compromise their integrity.

He cited a case where an unnamed media house assigned a reporter to cover a corruption issue at a health institution in his home county of Embu. The reporter was not given transport or any facilitation.

“Then they expect the same reporter will keep their integrity. Really? Let's be serious and honest with ourselves.”

“Today is my day to ask media owners to pay our children, their reporters and news crew very well. They deserve it,” he said.

“These people go every length to get us the story. In the end, how much do these people take home?” Muturi asked.

He said the media owners would be right to demand integrity among reporters if they paid them well.

The speaker said poor working conditions in the media houses were driving out senior journalists and editors, leaving the sector in the hands of newcomers. The result was a lack of objectivity and poor quality of media content.

Muturi challenged media houses to leverage technology and change their business models to free themselves from state and private capture that infringes on editorial independence.

He said if the independence of the press is compromised at the expense of business interest, "then the country will turn a corner that we may have come from some times in the back."

Muturi also said the media sector should not allow monopoly as it is also a threat to the freedom of the press.

"Media houses need to adjust to modern business models for their enterprises to make business sense."

Ministry of ICT PS Esther Koimett said the government had taken note of dwindling revenues in the media.

Koimett said they were "keenly listening to the idea of establishing a media fund to ensure sustainability in the industry, which is essential for a free and independent media serving the public interest."

Koimett said the government was keen to pay all media debts owed by the state by the end of the current financial year.

She said the government was committed to media freedom and sustainability.

"It doesn't start or end with the publication of a story. It's like a surgeon's knife, painful but necessary."

Media Council of Kenya CEO David Omwoyo said that Covid-19 has also affected how reporters do their work, exposing them to health risks and depressed income.

Some 300 reporters have contracted the virus since the pandemic struck, he said. Three of them died.

Over 2,000 journalists are facing economic hardships after their salaries were cut due to the Covid-19 outbreak. Thousands more have lost their jobs, he said.

The council chairman Maina Muiruri pleaded with media houses that have not reinstated journalists to full pay to do so "as a gift on this day of celebrating press freedom."