• So if you live in Lang’ata constituency or vote there, Jakakimba wants to become your next MP in 2022  when he hopes to replace first-term Jubilee MP Nixon Korir.

• He said his impoverished childhood motivates him to live freely, buying whatever pleases him, if he can afford it, and enjoying it to the fullest without false modesty. 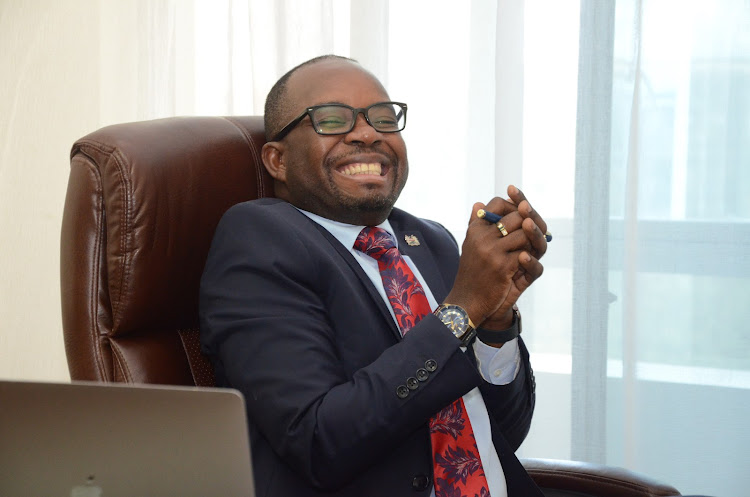 HAT IN THE RING: ODM leader Raila Odinga's former senior adviser during an interview at his office in Nairobi on April 28.
Image: DOUGLAS OKIDDY

Silas Jakakimba was orphaned at age six, waded through abject poverty, dropped out of school for lack of fees, and became a fisherman. That was the way his life was shaping up.

Then a tourist from the US came calling, like a fairy godfather, and his life would change, forever.

But his own steely determination and resilience turned the ragtag fisherman into today's city lawyer living his Nairobi dream and rolling up his sleeves for politics. The formative years of the 38 years old father of three in Mfangano island suggest his glad tiding is a sheer miracle.

His clothes were tattered, he had to give up school, he borrowed maize flour for food in the village where he lived with his grandmother.

He first arrived in the capital when a kindly hearse driver who had taken a dead body to Homa Bay gave him a lift to Nairobi.

So if you live in Lang’ata constituency or vote there, Jakakimba wants to become your next MP in the 2022 polls when he hopes to replace first-term Jubilee MP  Nixon Korir.

He argues he wants to offer accessible leadership that is in touch will the people and provides support to all residents without consideration of their tribes.

The former personal assistant to then Prime Minister Raila Odinga, now ODM leader, believes the seat is his for the taking, “having lived in Lang’ata all my city life except when I was in school in Parklands".

The flashy, exuberant lawyer spoke to this writer when the Star caught up with him at his firm, SESLaw Advocates LLP, offices at Kilimani.

Critics say he is only popular on social media, without hands-on ground experience. Jakakimba says his past experience and networks in the constituency “will translate into a massive groundswell not seen before in our politics".

Declaration on social media of his intention to run on attracted numerous endorsements. But if you think he is a social media slay king out to daunt the 'haves', Jakakimba says he has 'no damn to give'.

He said his impoverished childhood motivates him to live freely, buying whatever pleases him, if he can afford it, and enjoying it to the fullest without false modesty.

"Growing up when with all my siblings, I could not go to school because we had no fees and often had no food. There's no honour in poverty and I will live my life freely and openly," he said.

The effects of his limited upbringing are actively overshadowed by his polished persona, designer suits, expensive watches, top-drawer law offices, and sleek automobiles.

He banks on the networks he created when he served as Raila’s PA when he was Lang’ata MP since early 2007.

“I also lived in Highrise Estate and neighboring areas for a long time, making significant ordinary networks. I have traversed this constituency exhaustively and I can tell you without fear of contradiction that our candidature is not trial and error," he asserts.

His achievement to merit the seat? Jakakimba believes his deprived childhood has given him a high proclivity to empathise with the needy and poor and that he has helped as many people who are needy.

"Not just in Lang'ata. My inboxes are full of people seeking support to eat and feed their families, pay for schools, rent, hospital bills, and other needs. I feel them and I support them without making public," he said.

When his fish seller mother died of pregnancy complications, his polygamous father with 14 children distributed Jakakimba's to relatives to bring them up.

So alongside one of his sisters, he was brought up by his maternal grandmother. Dorina, in Sakwa, Bondo, which is Raila's home.

“I got to know what acute poverty is. We’d go without food. We’d even lack soap for washing and bathing at the shores of the lake,” Jakakimba said. He borrowed maize flour and his grandmother always returned it.

At age 12 when he finished his Class 8 exams at the top of his class, he dropped out of school, since his father was unable to send him to high school as his fishing business had tanked. He was admitted to Kanga High school in Migori county but he had no money, so he went fishing.

One evening when he and his friends were headed home from fishing, they met a white tourist couple visiting Mfangano island.

The chance encounter would change his life forever, transforming him from a village fishing kid to a confident, rather braggadocious globe-trotting lawyer, power broker, and politician.

The American man named Seth was a Rotarian. He stopped to greet the boys and Jakakimba answered in English, arousing Seth's interest and they talked more.  That is how he won the heart of the Rotarian to sponsor his education up to university.

“Seth became like a father to me. A real father,” Jakakimba said proudly.

He attended Kakiimba Secondary School on Mfangano island, again topping his class and later joining the University of Nairobi to study law. He currently chairs its board.

Seth, the Rotarian, offered to sponsor him to pursue medical studies abroad to become a neurosurgeon.

Jakakimba had other thoughts. He was excited to be in Nairobi pursuing any course, as long as he was in the city. That’s how he ended up studying law and forfeiting going abroad.

At the University of Nairobi’s Parklands campus, Jakakimba was both a Christian union leader and a political activist.

His involvement in the Parklands Campus Christian Union and Nyanza Evangelistic Team (NET) helped him engage in evangelistic and charity outreach.  His political involvement in SONU, then LDP, and ODM youth wings would change his life forever, determining his purpose.

After graduating in 2005, he would meet Opposition figure Raila Odinga the following year and became among his staunch, youthful supporters, winning his trust and admiration.

In early 2007, just as general election politics were hearing up, Raila tapped him as a personal assistant at his Lang’ata constituency office; he replaced an aide who died in a road accident.

“In October of the same year, Odinga elevated me to be his national personal assistant at the height of the heated presidential campaign. I’m forever grateful for the high trust he put in me. I’ve never seen the same since then,” the political wannabe said.

In 2008, at age 26, he would make history as the youngest law student to earn a Master’s degree. He had been given a full scholarship at UoN after topping his undergraduate class.

He served as Prime Minister Raila Odinga’s official personal assistant and head of the diary throughout his tenure up to 2013.

If you needed to meet the premier in whatever capacity, you had to get Jakakimba's approval.

“I literary budgeted the time of the PM. Even his chief of staff and PS had to go through me,” he adds proudly.

Since then, he said, he has remained in Raila's inner strategy sanctum,  currently serving in his secretariat as a senior adviser.

Jakakimba, however, is not new to active politics, having tried his hand in the Homa Bay senatorial by-election in 2015 after the death of Senator Otieno Kajwang’. He lost the nomination.

Six years on, he thinks he has learned his lesson and can plunge into the city's politics. Time will tell if his hard childhood life will give him enough ammo to stage a formidable fight.