I lowered my guard and Covid almost killed me - Bishop Muheria

He organised a nine-day super-spreader prayer marathon, moving to all 52 parishes

•Muheria says he was ready to die and had resigned to fate due to the pain he was suffering.

•He says what frightened him most was the fact that the disease has no cure and known medical procedure. 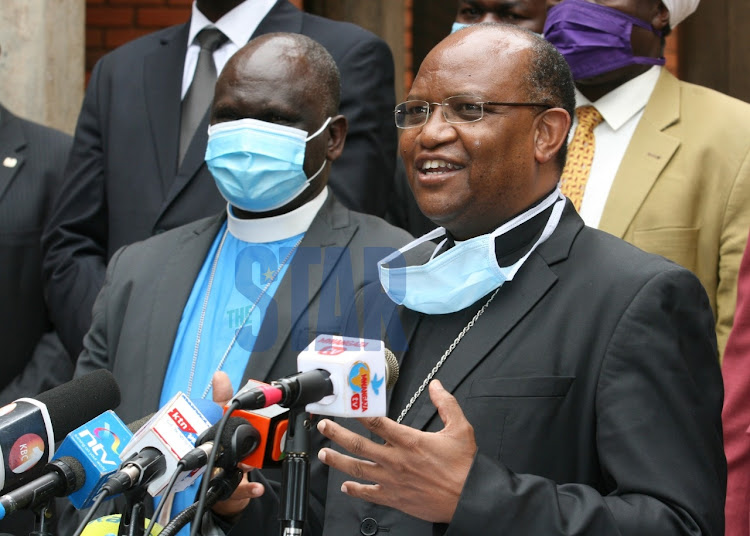 When the first lockdown was lifted in July last year, Nyeri Catholic bishop Anthony Muheria mobilised his flock for a nine-day prayer marathon, moving to all 52  parishes. A real super-spreader.

Muheria told KBC in an interview aired on Sunday night that what started as general lethargy from the gruelling schedule became "a cloud of darkness.

"You feel your energy going down, you're unable to breathe, your movements are impaired and your thinking slows down."

Three days later, he tested positive for Covid-19. Nothing would ever be the same.

The bishop is chair of the Interfaith Council on Covid National Response, part of the national emergency team that advises the President on lockdowns, when to lift them and on other crucial precautionary measures.

Muheria said that during the first lockdown, he religiously wore face masks, observed all Health ministry protocols and sensitised his contacts and church members about the virus.

But he lowered his guard, perhaps due to lower infection figures at the time.

Sure enough, the bishop was infected and would spend weeks in hospital trying to stay alive.

Muheria went into isolation a few days later. His condition worsened and he was transferred from Limuru to Mater Hospital.

Rosary clutched into his hands, he lacked the energy to pray, Muheria said. The pain was surging.

He lost hope and resigned himself to fate in what he calls "self abandonment". The bishop was ready to die.

"Yes, I reached a stage where I made my peace with God. If this was the way he wants me to go, I was ready to go," he said.

What made it worse was news that those who had been in the same ward with him had been admitted to ICUs and later died.

The prelate always followed the status of all friends he made at the ward and he would ask the nurses about their progress.

The abandonment, he said, strengthened his resolve in the fight against the virus because he relied wholly on God.

"You can cure me but if you want me in your presence,  I'm already prepared."

The bishop said what made him fear more for his life was the fact Covid-19 has no known cure.

"Unlike other diseases in which procedures and treatment are predictable, Covid-19 has no known procedures and survival is a matter of luck," Muheria said.

"There is no disease which calls for as much abandonment as Covid," he said.

"If it was a disease you know has a cure, then you put a bit of trust in the treatment, the medicine," he added.

"If it is something about surgery, then you put a bit of trust in the surgery. There, the trust is only in God and that He will give your body the strength to fight this virus."

Lying on what he believed to be his deathbed, the bishop's phone proved to be good company as he used it to play music to uplift his spirit and what remained of his hope.

He repeatedly played hymns like Great is Thy Faithfulness and The Old Rugged Cross to lift his spirits.

"I listened mainly to gospel songs be they in Kikuyu, Kiswahili or English. My phone helped me connect both with people and with God."

With the last lock down lifted on Saturday night, Muheria advises not to be overconfident and lower your guard. Only listen to advice from medical authorities about the virus, he said.

The bishop believes what is fuelling the spread and caseload is "relying on social media prescriptions.

"Prescriptions by pseudo-doctors purveying information on social media, discouraging going to hospitals and insisting 'take this and this, do not go to hospital' is the main danger we are facing," he said.

"Truth and credibility are cheap commoditie in Kenya," the prelate said, adding that Kenyans tend to easily dilute even the most powerful message, taking it lightly, so it does not achieve its purpose."