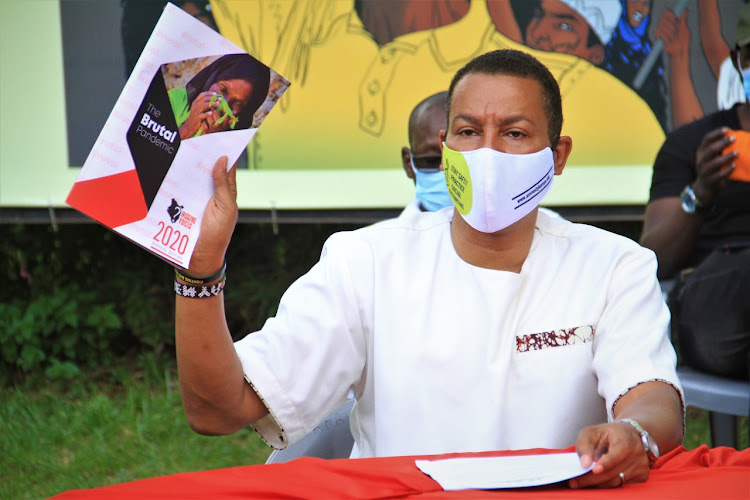 Activists have demanded immediate arrest of police officers they claimed arrested a Mathare youth, hours before his body was found at City Mortuary in Nairobi.

The youth, named Collins, is said to have been arrested on Thursday, April 29 by an officer known as Njoro. He was arrested at about 3.30 pm. His body was found at the mortuary the following day.

Collins was a famous homeless man who lived on the streets in Mathare.

MSJC said he was helping them document a case in which he witnessed the killing of another young man called Dominic Kalema.

On Thursday at about 5.41 pm, MSJC said Collins was picked up in a Toyota Probox— KCW 491N. The group raised alarm. They said the vehicle is often used by an officer known as Baraza to detain and harm Mathare youths.

The arrest of Collins was documented on MSJC'S Twitter timeline where they appealed to the National Police Service including the Inspector General and the DCI for help in vain.

At 9.54 pm, MSJC tweeted that two more young men had been illegally detained in the same Probox, one known to them as Kelvin Irungu and his unnamed friend. The vehicle was driven and parked in Pangani.

MSJC later reported that there were rumours that Collins had been executed although they remained hopeful the claims were untrue.

About four hours later at 01.11 am, MSJC said it had confirmed that Collins was killed and his body taken to City Mortuary. Kelvin Irungu and his friend are still missing.

On Sunday, the group called for an investigation into the execution and demanded that three officers based at Pangani police station be arrested.

The officers are the group's prime suspects in the execution.

The group said they had received numerous complaints of illegal arrests, detention and killings against officers Ahmed Rashid and two others only identified as Baraza and Njoro.

“We are alarmed and utterly dismayed by the illegal arrest, detention, and killing of Collins, a youth from Mathare in Nairobi county on April 29,” said Amnesty International country director Houghton Irungu.

Irungu said the killing is the latest in a series of executions of Mathare youths allegedly by a rogue police officer known as Baraza.

He said the cop operates in Mathare and Pangani areas of the city.

Irungu said they had received numerous complaints against the three officers.

“We are shocked and perturbed that the duty bearers in the Ministry of Interior, the National Police Service and Independent Policing Oversight Authority have not taken steps to bring these officers to justice. We suspect that Baraza, Ahmed Rashid, Njoro and the others are serial killers in uniform,” said Haki Africa boss Hussein Khalid.

They want the cops immediately arrested for capital crimes, including abductions and executions committed against Collins and others.

“We also want the National Security Committee of the National Assembly to table a report outlining the action they are taking to curb the alarming rise in extrajudicial killings and enforced disappearances,” Khalid said.

The activist asked Ipoa to institute urgent investigations to establish the whereabouts of Kelvin Irungu and his friend alongside the circumstances that led to the death of Collins.

“We demand swift action to end the reign of terror on Kenyan youth in Mathare and other informal settlements in Nairobi and across the country including Mombasa and Kisumu."