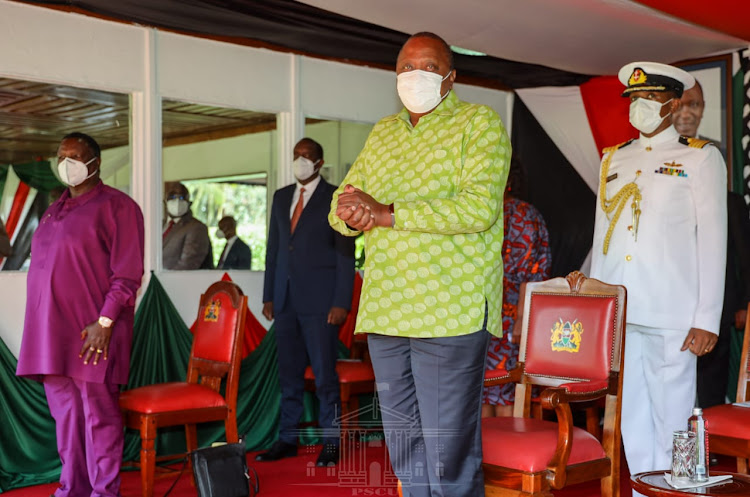 Cotu secretary general Francis Atwoli with President Uhuru Kenyatta during Labour Day celebrations on May 1, 2021 at State House in Nairobi

Workers are fully behind the Building Bridges Initiative, their union has said.

Central Organisation of Trade Unions secretary general Francis Atwoli on Saturday said they fully support the BBI Bill even as MPs jostle over its contents.

Atwoli said a recent meeting of the Cotu leadership resolved to fully support the Constitutional Amendment Bill, 2020 that is currently before Parliament.

“We will stand with you in ensuring that part of your legacy is giving the people of Kenya a new Constitution,” Atwoli told President Uhuru Kenyatta during Labour Day celebrations.

The celebration was held at the State House Gardens in Nairobi.

Uhuru was the chief guest.

Atwoli said a majority of the people who have been suffering after every election are Kenyan workers, women and children.

“Politicians should dialogue and embrace tolerance as we head to 2022. Let elections and political reforms not divide us,” Mugo said.

There was push and pull in the Senate and National Assembly last week as members debated the BBI Bill, raising political temperatures in the country.

Atwoli asked the President to keep the handshake with ODM leader Raila Odinga alive saying it had brought stability to the country.

Lawmakers are divided on whether to amend the BBI Bill with a special focus on the 70 new constituencies. The Independent Electoral and Boundaries Commission had earlier said the creation of new constituencies is its preserve.

“Do not relent on the BBI. It is the people, the Kenyan workers who said they want the additional constituencies,” Atwoli told the President.

He added that workers will support Uhuru to realise his dream of addressing governance shortfalls.