• The final layout of the service park and the route were approved in Naivasha on March 5 after Sports, Culture, and Heritage CASs Zack Kinuthia and Simon Kachapin ended a three-day field review of work on preparations. 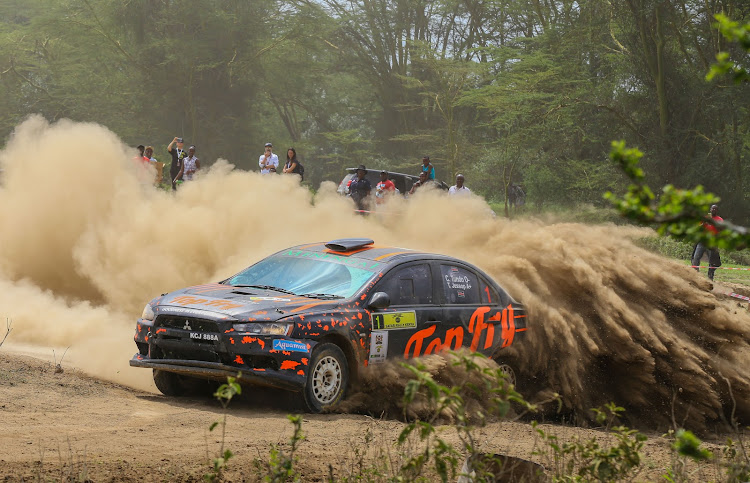 Carl Tundo in action during the 2019 Safari rally.
Image: /COURTESY

The stage is set for the Safari Rally, with powerful engines to roar to life from June 24 to 27 in the Great Rift Valley after a two-decade absence.

Undeterred, Kenyan organisers rolled up their sleeves and returned to the drawing board. Their sustained efforts have culminated in this year’s championship.

The final layout of the service park and the route were approved in Naivasha on March 5 after Sports, Culture, and Heritage CASs Zack Kinuthia and Simon Kachapin ended a three-day field review of work on preparations.

“The event will start from June 21 with the recce (test run) using standard cars in the real Safari route and will peak with a shakedown at Ndulele Conservancy in Naivasha on June 23,” Babhra said.

“Being a two-day event, we really don’t have so much mileage to exhaust the Safari Rally route. We will run a qualifying stage on Friday, which will give us the starters for Day 1 on Saturday. Friday’s programme begins at 8am with free practise and qualifying at Ntulele, Naivasha.”

WRC Safari Rally Kenya CEO Phineas Kimathi reckons the return of the FIA global series is a major milestone given the WRC Safari could pump as much as Sh6 billion into the economy.

“The essence is to run an event that will sell Kenya as a tourist destination as well as provide a market for Kenyan products.

“One of those things I’m trying to work on — because I have gotten the blessings of the necessary government arms — is to link coffee marketing to the Safari brand, to link tourism, hotel bookings, and game reserve excursions to the actual event.

“We have an opportunity to exhibit our products in all the WRC European events (eight in total) because we are now part of that network,” Kimathi said.

Local tourism is set to benefit immensely from WRC’s cumulative global TV audience of 850 million viewers across both the mainstream and social media. The Safari will benefit from 25 hours of live TV coverage in 155 markets.

The event will act as a double-header as points awarded will also count towards the Kenya National Rally Championship.

In 2007, Kenya’s Safari joined the Intercontinental Rally Challenge for one year for the first time since 2002.

Following intensive lobbying by the Kenya Motor Sport Federation in collaboration with the government, Kenya was included in the FIA calendar last year.