• Harish Patel, the man in charge of Kariokor Hindu Crematorium, volunteers to help send souls to the afterlife for rebirth.

• While some would shy away from the work involving death, he considers it a labour of love. His children come to help clean up, he's popular in the community and even ran for office. 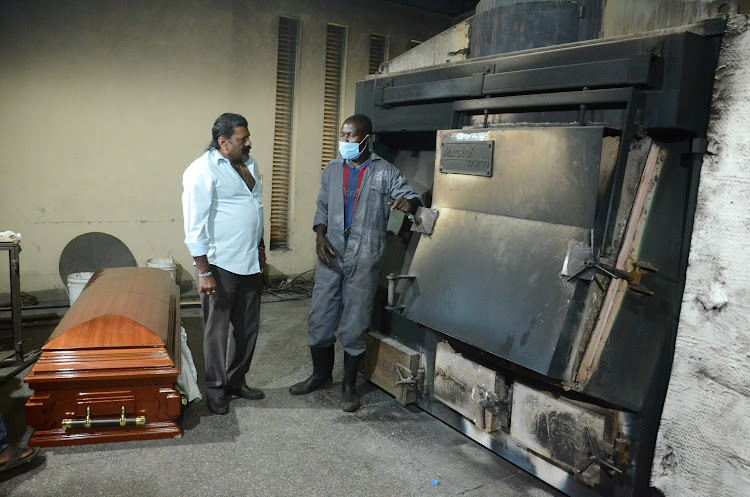 Harish Patel, the man in charge of Kariokor Hindu Crematorium, says he can tell a person's character by the flames, heat and smoke that come from a funeral pyre.

The dead tell him what they were like in life.

“A stern, unapproachable person is seen in the furious raging flames that emit so much heat you cannot stand close to the pyre. If the body is placed in a furnace, a thick dark smoke gushes out of the chimney," the 54-year-old  says.

“The opposite is true for a calm, friendly person. The heat produced is not too much,” he adds.

He should know, Patel has worked, strictly as a volunteer, at Kariokor for at least 17 years. He has mastered every detail of disposing of mortal remains and hurrying the soul on to a rebirth.

He knows exactly how much wood it will take to consume a body of any size; he knows people who were ailing and heavily medicated take longer to be consumed.

He runs a separate business and consultancy.

Patel wears an open white shirt and two gold chains, a gold stud in his left ear and gold rings on his fingers.

His family is proud of him and he's a well-liked and respected member of the community. He even ran for public office.

There's no stench of death and embalming fluid about him when he goes home. The community has no aversion to his work.

Patel loves what he does, calling it a divine service to the Hindu community. Still, when the day is done, he leaves the fires behind.

Born in India, he moved to Kenya with his family when he was young. Growing up, he observed many cremations.

Patel and his wife have three children in their late teens.

His family, he says, views his work as sacred and supports him fully.

“When my children are around, they visit sometimes and clean the areas where we conduct prayers for the dead before cremation,” Patel says.

Patel speaks fast, walks briskly as he takes the Star on a tour of the crematorium. the only one serving the Hindu community in the area.

He crushes the hot tip of his half-smoked cigarette with his fingers before tossing it. He  reaches into his pocket, pinches some black powder and  places it under his tongue.

Smoking for pleasure has nothing to do with his job  that can wreathe him in smoke.

“My role is is to cremate the corpses brought here. I work with a team, a priest who conducts burial services and assistants who help set the fireplace,” he says.

In the past, the area was a den of thieves.

“People feared coming to cremate their dead here because of the thieves. We started clearing the long and thick bushes with my friends after we saw the situation during the cremation of a  friend,” he recalls.

“When a corpse arrives for cremation, one look at it and I know if we will need more firewood regardless of the size,” he says.

The bodies that burn faster and properly are of people who did not take a lot of medicine.

“Some people live on drugs for various health reasons. Those who have to be on treatment for so long before their death usually take time to burn and we have to actively monitor the fire as it could get extinguished,” he explains.

To keep the fire burning and ensure every part gets burn, attendants use a metal bar to shake the body while it burns.

Patel's day  starts early but each is different depending on the amount of work he expects. Cremations do not happen every day — or before Covid they didn't —and, therefore, he does not go to the crematorium daily.

“Bookings for cremations are done a day or even earlier, therefore, I am able to plan well for my days,” he says.

In the past two months of the third Covid-19 wave, more people than before have been cremated at Kariokor. He attributes the high numbers to a high death toll and the travel lockdown that makes it impossible for people to travel to rural homes for burial.

By Monday, 84 bodies had been cremated while 97 were recorded to have been cremated in March. More than 95 per cent were from the Asian community.

Patel says his cremation job does not hurt his social life. Everyone knows what he does and he's still popular.

“I am well known as I also ran for a political seat. I doubt anyone fears me because of my job," he says "People understand  the dead must go somewhere; body in the ground or cremains in an urn."