• Debate on the bill is expected to resume next Tuesday.

• Questions included whether the Bill was people-driven or executive driven, what to do about the problem of two versions of the Bill and how creation of 70 constituencies was introduced. 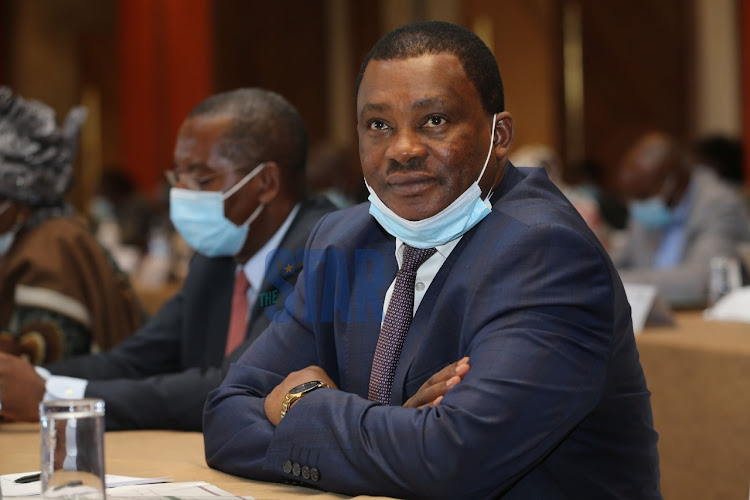 MPs have posed tough questions to Speaker Justin Muturi on the constitutionality of the BBI Bill and the National Assembly's role in considering it.

The debate on the Bill will continue on Tuesday afternoon. More than 75 members were yet to speak when the special sitting was adjourned on Thursday.

Muturi will rule on the questions in the course of the debate, as lawmaker pressure him to correct errors in the Bill and settle divisive issues.

The questions include whether public participation by the joint committee was genuine or pro forma, and the constitutionality of the process.

His Ugenya counterpart David Ochieng asked whether the Bill was executive-driven or a real popular initiative.

“Does the Bill sit within the four corners of Article 257 of the Constitution? Public money was spent on this Bill... what is the nature of this Bill?” he asked.

Ochieng also wants the speaker to address concerns the process has been challenged in court, hence, it may amount to “a waste of Parliament’s time”.

“Why would Parliament go through this Bill when the cases are on? What is the essence of passing this Bill when you will keep it as it cannot be assented to by the President?” he asked.

He also asked how the proposed 70 constituencies were introduced in the Bill and whether there were submissions on the constituencies before the taskforce that steered the BBI.

Endebess MP Robert Pukose wanted to know which counties passed the Bill, citing reports that only 13 counties may have passed the correct version.

“Are we discussing the correct Bill or not?” he asked.

The MP also asked whether creation of the CDF was constitutional.

“If we want to bring ministers, will it be constitutional to create a parliamentary system without amending the provision for separation of powers?” he asked.

His Kikuyu counterpart Kimani Ichung'wah asked," Considering we have Covid, what measures have been put in place for the majority of members to contribute and vote?

“Will the quorum be 50 per cent plus one of members allowed within Covid limits or 50 per cent of the 349?” the MP asked.

He also delved into the issue of errors, saying the reports on them cannot be ignored.

“How then do we correct those errors? What Bill is before the House? Is it the one that went to the 13 counties? Does the Bill here contain errors?

“What are the implications of the two Houses debating different versions? Can the errors be corrected? Are there ways we can amend?” Ichung’wah asked.

Suba North MP Millie Odhiambo said that since everybody agrees the Bill is under a popular initiative, “is there an executive initiative?

“Does the Constitution make reference to an executive initiative? Is there a ranking of rights in the Constitution? Does the President have a greater right than I do?” she asked.

Soy MP Caleb Kositany wanted to know how long the matter will be active in the House.

“Will it be people-driven when a matter as serious as a constitutional amendment is debated for two days," Kositany asked.

Suna East MP Junet Mohamed, who is co-chair of the BBI sSecretariat, said there is no better  public participation than the collection of four million signatures, and eventually the referendum.

“Kenyans have a right to change the Constitution,” he said.

His sentiments were backed by Chepalungu MP Koske Gideon who said, "The people have the power to amend the Constitution. Parliament is a conveyor belt."

“The only thing that can be unconstitutional is if the wrong process is followed in conducting a referendum, not what the people want to change. Let us pass this document to the rightful owners, who are the people of Kenya,” he said.

Say draft law has several unconstitutional clauses Parliament must change before it is subjected to a referendum.
News
2 weeks ago

Why Parliament is the next battlefront for BBI