Kemsa board disbanded to bring in fresh ideas — Kagwe

- Kemsa has been rocked with scandal after scandal in the past two years, with the credibility of the board members taking hit after hit.

- On Thursday afternoon, Kagwe said the President “can always, at his pleasure, make changes in any institution in the country”. 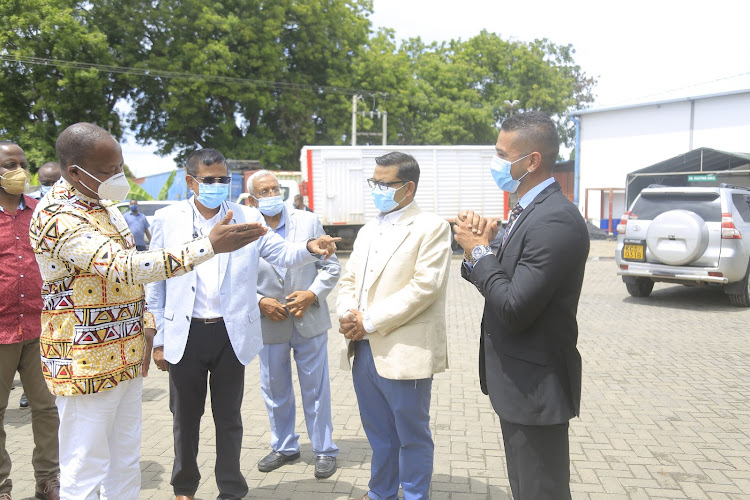 Health CS Mutahi Kagwe on Thursday played down the disbandment of Kemsa board saying it is a normal move done to improve service delivery by bringing fresh ideas.

Kemsa has been rocked with scandal after scandal in the past two years, with the credibility of the board members taking a hit.

Kagwe said President Uhuru Kenyatta “can always, at his pleasure, make changes in any institution" in the country.

“I am also entitled to make changes on various boards that fall under the Ministry of Health,” he said.

When asked about the probe into the Kemsa scandal, he referred journalists to the Office of the Director of Prosecutions for an update.

He spoke after touring the Revital Health (EPZ) Ltd, which is the largest medical device manufacturing facility in Africa.

Uhuru disbanded Kemsa board following procurement and other scandals involving Covid-19 and ARVs.

A new team of five members has been appointed and will be chaired by Mary Chao Mwadime.

Kagwe said it is not just Kemsa that has been affected by changes. He noted that Kemri board also has new people.

“The process of renewing is not new. That is why, for example, we say when you serve two terms, you leave so that we can encourage change and we encourage new ideas into the management of the institutions,” the CS said.

He said his main responsibility is to ensure Kemsa carries out its mandate effectively.

The authority is one of two institutions, including National Hospital Insurance Fund, that are critical in achievement of the Universal Health Coverage.

“It is our intention therefore to ensure that those institutions are run effectively and efficiently not because of the demands of others but because this is what Kenyans deserve,” Kagwe said.

The CS also reiterated that Kenya has no shortage of ARVs, insisting that soon the antiretroviral drugs at the Mombasa port will be released.

“The most important thing is to ensure that the ARVs are actually with people, being used. That’s the critical bit,” Kagwe said. “But we do not have a shortage of ARVs currently across the country.”

He said the ministry is working on modalities of ensuring the ARVs reach the target population after finally resolving the impasse the government had with USAID.

Meanwhile, Kenya’s Covid-19 positivity reached 10 per cent on Thursday after the country recorded 495 new cases out of 4,929 samples tested within 24 hours.

Kagwe said positivity is now averaging 10 per cent and attributed it to more adherence to the protocols by the Health ministry.

“If we continue on this lane, we are likely to see our economy opened,” he said.

However, 19 people lost their lives to Covid-19 complications.

Some 191 patients had been admitted to hospital by Thursday, with another 164 on supplementary oxygen.

“Only 21,000 doses of vaccine are left in various facilities,” Kagwe said.

He, however, noted that those in some counties remain unused, with county officials sparing them for the second dose.

“We are asking these counties to use all the doses they have as the first dose. More will be given to them for use as the second dose,” Kagwe said.