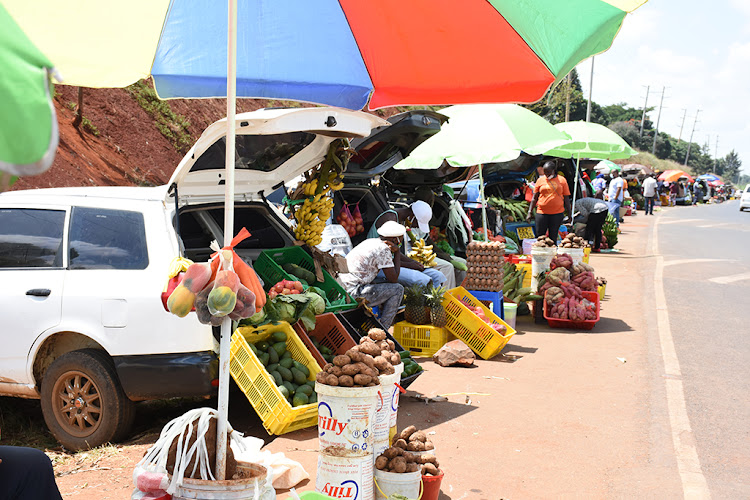 CAR-BOOT TRADERS: Vendors along the Northern Bypass sell food items to motorists from the boots of their cars as one way to survive the Covid-19 pandemic.
Image: MERCY MUMO

Prices of most staples have remained stable across many markets, according to the March food and nutrition security report.

The report was released by the Ministry of Agriculture.

The average wholesale price of beans in March was Sh7,497 per 90kg bag, compared to Sh7,349 in February.

According to the report, Garissa county recorded the highest maize monthly average wholesale price at Sh5,100 per 90kg bag.

It was followed by Homa Bay, Kisumu and Mandera counties, where prices were between Sh3,500 and Sh3,000 per 90kg bag.

In Kajiado county, maize sold at Sh2,900 while in Nandi, Kakamega, Lamu, Kitui, Mombasa and Bungoma the wholesale price was between Sh2,800 and Sh2,600.

The rest of the counties recorded wholesale prices of less than Sh2,500, with Kirinyaga recording the lowest price at Sh1,900.

A kilo of maize averaged at Sh38 in selected markets.

A tray of exotic/grade eggs went for Sh319 while a tray of indigenous/kienyeji eggs sold for Sh390. A kilo of beef sold for an average of Sh330, mutton Sh430, and Sh300 for pork and chicken.

The Food and Agriculture Organization of the United Nations reported that global food commodity prices rose in March. FAO attributed the rise to quotations for vegetable oils and dairy products.

Most bread winners have lost revenue streams or with lucky ones operating on half income.
Business
1 year ago