• Some members, however, raised constitutional issues with the bill's introduction in the House.

• National Assembly Majority leader Amos Kimunya and his Minority counterpart John Mbadi moved the motion with a call that their parties had resolved that members pass the bill as is. 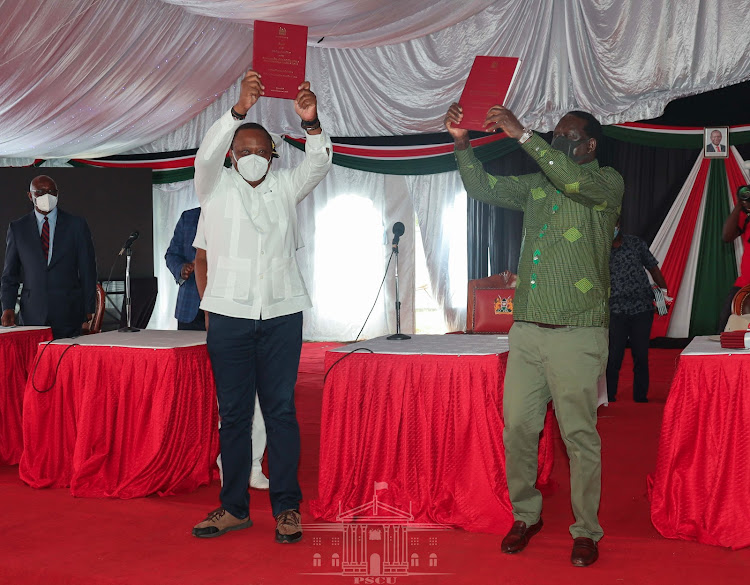 Allies of President Uhuru Kenyatta and ODM leader Raila Odinga on Wednesday put a strong case for the Building Bridges Initiative as Parliament started debate on the Constitution of Kenya (Amendment) Bill.

Lawmakers allied to the handshake principals laid the foundation for the debate in positioning the BBI as the ultimate solution to the cyclic wave of electoral violence.

The National Assembly and the Senate began the debate amid calls that issues of constitutionality of the bill should not arise, emphasising the prerogative of Kenyans to change the Constitution.

National Assembly Majority leader Amos Kimunya and his Minority counterpart John Mbadi moved the motion with a call that their parties had resolved that members pass the bill as is.

Majority leader Samuel Poghisio and his Minority counterpart James Orengo moved the motion in the Senate, terming the amendment as progressive.

“I urge all senators to consider and pass this bill for the people of Kenya, national development, strengthened devolved system, gender parity, strengthened bicameral Parliament and accountability of public resources,” Poghisio said.

The West Pokot Senator said the bill addresses the salient issues that have dragged the country’s progress.

He reckoned that the bill would increase allocation to counties, ensure equity and equality in the sharing of public resources, anchor the national ethos and hasten the fight against graft.

“The senators noted that the bill significantly benefits the devolved units by increasing revenue and enhancing the mandate of the Senate,” Poghisio said.

He took the House through all the clauses in the bill, justifying the need for each.

The legislator narrated the origin of the bill, saying it stemmed from the handshake that followed the bloody and divisive elections in 2017.

Orengo, Raila’s close ally, seconded the motion, urging the House to approve the bill. He, however, poked holes in various clauses which he said are inconsistent with the Constitution.

“The committee was saying that without amending Article 89, which creates constituencies, that provision will be standing on nothing and hang for nothing. It will create a parallel system of creation of constituencies,” he said.

The Siaya senator said the distribution of the new constituencies is not anchored on a scientific method, thus the huge cry from various parts of the country.

“[But] I have come to the conclusion that we do not necessarily need to sever Schedule Two or amend it; a schedule is part of the Constitution. So you cannot amend the schedule,” he added.

In the National Assembly, leaders urged critics to allow the process to get to Kenyans at the referendum, adding that the bill and the schedule are treated as one bill.

“What we don’t want to hear is that the bill is being signed without a referendum. I urge this House to approve the bill. The people will decide on the bill at the referendum as one bill,” Mbadi said.

Even so, some members raised constitutional issues and poked holes in whether the bill was properly before the House and the place of the substantive issues pointed out in the review of the legislation.

They questioned the manner in which the 70 constituencies were introduced and whether there was a memorandum to the BBI task force seeking their creation.

Other concerns were on whether the initiative was indeed 'popular'

The Suba South MP said the game of politics and negotiations provides that people will not get everything they wanted to be included in the bill.

He urged ODM supporters across the country to back the bill in the referendum that would follow after the parliamentary process.

The leader positioned the initiative as one that would end the politics of 'us versus them'.

“We have associated progress in this country to who occupies the highest office in the land and the ethnic background of that particular individual.”

Mbadi said the violence in the country is a manifestation of the 'us versus them' principle, adding that the situation will never help the country going forward.

“We realise that we want a leader who helps bake the cake and helps in promoting economic progress, not one who leads us to economic ruin,” he said.

The promoters also positioned the bill as a panacea for the unending puzzle of corruption, saying it sets foundations that would solidify the fight against graft.

“I'm happy that at least the BBI bill is proposing certain steps to be taken to handle issues of corruption, one of which is trying to clearly state that these cases must be concluded within a specified period,” Mbadi said.

They cited the amendments to Chapter Six on Leadership and Integrity as intensifying the war on corruption through stronger institutions.

He rebuffed critics who have been claiming there was no public participation, saying the process was inclusive.

Mbadi, saying he spoke as chairman of ODM, pointed out the provisions curing divisive elections. He said it will help deal with the ‘common enemy’ approach in the current polity.

Kimunya said the bills initiated in the BBI process will also go a long way to building a strong foundation for youth empowerment, citing the proposed Youth Commission.

The Kipipiri MP asked members to support the bill and campaign for it in their respective constituencies.

Orengo also made a passionate case on the role of Parliament when it comes to the processing of a bill driven through a popular initiative.

Post a comment
WATCH: The latest videos from the Star
by MOSES ODHIAMBO AND JULIUS OTIENO
News
29 April 2021 - 09:00
Read The E-Paper