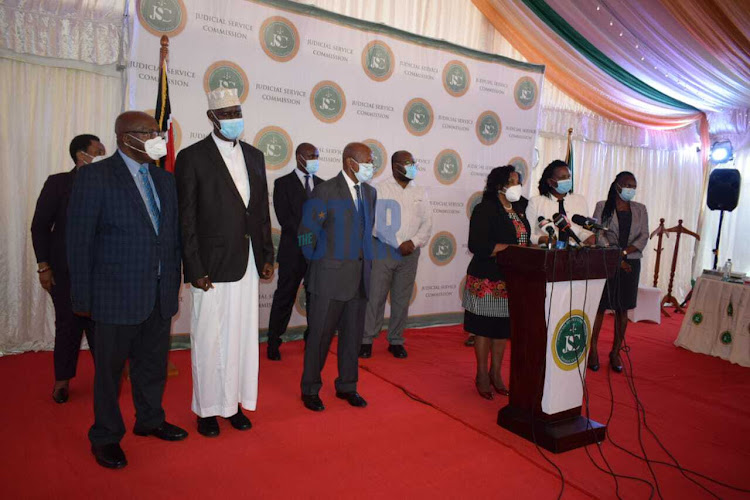 Some MPs yesterday raised concerns about regional balance in the running of the country after President Kenyatta sent the name of Justice Martha Koome to Parliament for approval.

Koome, who if approved, will head one arm of government, comes from the Mount Kenya region together with National Assembly Speaker Justin Muturi and President Uhuru Kenyatta.

By law, Muturi is third in the pecking order and would act as President in the absence of the President and the Deputy President.

"It is not acceptable that all the three arms of government are led by people from one region," said Lugari MP Ayub Savula.

Five other MPs and three senators also raised similar concerns but did not want to be quoted, saying they will raise their issues when Koome appears before the house committee.

Yesterday, Koome expressed gratitude ahead of her confirmation.

In a thank you statement, Koome said she was extremely grateful to the Judicial Service Commission for nominating her to the office.

"It will indeed be an honour and a great privilege for me to serve this great country as the Chief Justice if confirmed to the office," she said.

Deputy President William Ruto has congratulated Koome. In a phone call, the DP expressed his best wishes to the nominee.

Ruto told Koome that her nomination shows Kenyans' faith in women leadership and will inspire young girls across the country.

"This nomination confirms that women have come of age and are breaking the ceiling and this is an inspiration for the country and every girl," Ruto told Koome during the phone conversation.

The JSC is, however, under pressure to release the criteria and individual scores of all 10 candidates interviewed for the position. This came hours after it picked Koome.

The appointment of Appeal Court judge Koome also sparked a storm over diversity and inclusivity in the distribution of the country’s most influential jobs as her nomination heads to Parliament.

Already, the Katiba Institute and legal scholar Makau Mutua have moved to court to compel the JSC to make public the scores of the interviewed candidates. They also want to know exactly what criteria were used and to see the minutes of meetings about the interviews to ensure transparency.

JSC presiding chairperson Olive Mugenda on Tuesday said they were not bound to release the individual performance of the interviewees but to name the next CJ to succeed former CJ David Maraga.

Two candidates who spoke to the Star said the JSC could have manipulated the scores “to suit some interests.

"The results should have been released to, at the the very least, all candidates at the time of announcing the nominee,” one candidate told the Star, requesting anonymity.

The candidate said Parliament should compel the JSC to submit the scores.

Another applicant for the top job said he had evidence that the JSC commissioners could have manipulated the selection process against “the best performers.

“We have information there was some monkey business that happened. The [actual] scores speak to what would have been a different outcome of the interviews,” he told the Star.

Speaking in confidence, the lawyer challenged the JSC to be bold and release the candidates' individual scores if the commissioners believe the process was aboveboard.

“Iko ukora ilifanywa (There was some interference). I will be vindicated if the results are made public,” he said.

Senior counsel Fred Ngatia, who was seen as one of the front runners for the post, had complained that a last-minute manipulation of his scores denied him the job, "yet I was the  best performer.

“Four commissioners from Mt Kenya reduced my scores yesterday [Monday] afternoon after they were called by powerful people,” Ngatia was quoted by the Business Daily as saying.

He went on, “Without that intervention, I was far ahead of all the other candidates.”

Prof Mugenda, who chaired the interviews, had alluded to Ngatia's stellar performance, at one point saying, “You answered that question very well.

“I took interest in your answer to the question asked by DCJ on this philosopher called Montesquieu [French philosopher and judge known for works on separation of powers].

"You answered very well, really giving an academic answer and my question is, senior counsel, is this philosopher someone any lawyer remembers…or is it that you read a lot of philosophy,” she asked during the interview.

Law Society of Kenya president Nelson Havi was more blunt, claiming Koome's nomination was part of a scheme by the state to capture the Judiciary.

“We must register our disappointment with the JSC because the manner in which this exercise has been conducted is demonstrative of a determined effort to capture all institutions of government, and in particular the Judiciary,” Havi said.

He said he would leave Kenyans to feel the outcome of a process he termed  indicative of investment by the state as opposed to being merit-based.

However, Chief Registrar of the Judiciary Anne Amadi dismissed claims that the JSC manipulated the results.

"No," she responded to a text by the Star.

Apart from claims of interference, there is also disquiet over ethnic diversity, a question that has haunted Kenya since Independence.

Civil society activist Suba Churchill and flamboyant city lawyer Donald Kipkorir are among those who raised concerns, especially about regional and ethnic representation.

Churchill said Koome's nomination—inasmuch as it could be based on merit—is an affront to the Constitution that speaks to diversity in the public service.

“The nomination could have been professionally done and based on merit, but there is a general feeling that key positions in public service would be held by people from one corner of the country. These are the things that the Constitution frowns upon,” Churchill said.

Churchill said Koome's appointment puts the Judiciary, the legislature, the Executive and military under the command of people from the Mt Kenya region, despite the push to address diversity.

Besides President Kenyatta, Speaker Muturi and Koome, Attorney General Kihara Kariuki and Chief of Defence Forces Robert Kibochi are also from the region, which is inhabited by the Kikuyu, Meru and Embu communities.

Lawyer Kipkorir admitted that the country's most powerful positions were in the hands of people from one region, saying the President's backyard should now be satisfied.

"The three most powerful positions in Kenya, as in US, are the President, Chief Justice and Speaker of the House. President Kenyatta is Kikuyu, Martha Koome is Meru, JB Muturi is Embu/Mbeere. If there will ever be disquiet again in Mt Kenya, it will be sheer and audacious greed," he said

However, the JSC maintained its decision to nominate Koome was unanimous and their duty was to present the nominee for the next Chief Justice and not to release the scores.

“Our duty was to select the best candidate and that is what we have done,” Prof Mugena said on why the commission will not be making the scores public.

Following the surprise nullification President Kenyatta's reelection in 2017, the Judiciary asserted its influence on the country's political landscape.

The judicature is expected to be a key determinant of crucial issues, including the future of the BBI Bill to amend the Constitution. It is part of President Kenyatta's legacy projects.

There are concerns the political elite could be plotting to control the Judiciary as the country enters critical phases of the BBI process and preparations for the 2022 general election.

The Supreme Court presided over by the Chief Justice will play a key role next year, with the presidential elections likely to end at the apex court.

Constitutional lawyer Kamotho Waiganjo said that for purposes of transparency, the JSC ought to reveal the grading system.

“It would be helpful, I think, because these are positions that are sought publicly and people are interviewed publicly,” declared Waiganjo.

“I think it would be helpful to know the basis and the considerations used to reach the decision made.”

Koome said she continues to thank God ahead of her confirmation.
News
1 week ago

Mutua says he wasn't given his results when he applied for CJ job in 2016.
News
1 week ago