MPs save Mutemi from losing Media Council board job

National Assembly ICT committee made the recommendation in a report tabled on Tuesday.

• A parliamentary committee had last month recommended the removal of Mutemi.

• The National Assembly ICT committee chaired by William Kisang made the recommendation in a report tabled in Parliament. 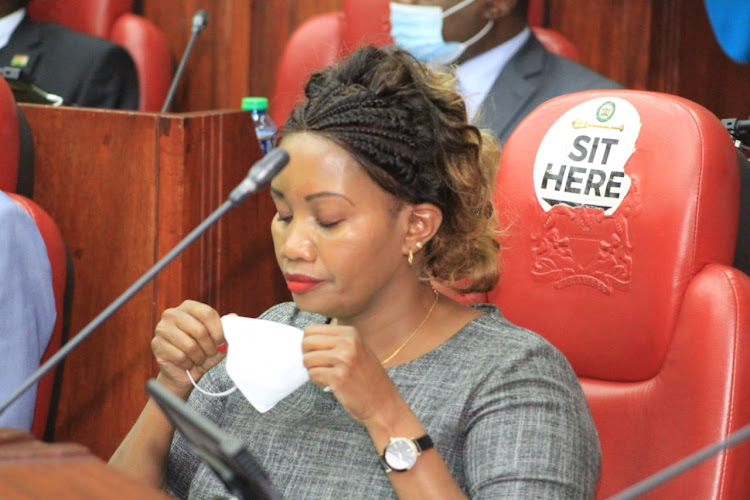 Tabitha Mutemi during the investigation of her removal from the Media Council of Kenya board on March 3, 2021/EZEKIEL AMING'A

MPs on Wednesday shot down a petition seeking the removal of Tabitha Mutemi from the Media Council of Kenya board.

Lawmakers voted nay to the question where the ICT committee sought that the charges be forwarded to the ICT CS for constitution of a tribunal to initiate the removal.

Members raised reservations with the process the House had pursued in the bid amid allegations the accused person did not get a fair chance to be heard.

Nominated MP Godfrey Osotsi issued a dissenting report where he said the IEBC communications director was being targeted unfairly.

Lawmakers in support of Mutemi said her role at the job does not amount to a full-time job hence not in breach of the public service principles and values.

They said Parliament must not allow itself to be used as an arena to settle boardroom wars.

So far, Mutemi has challenged the purported removal and has threatened to sue.
News
3 months ago

The ICT committee had last month recommended the removal of Mutemi.

Kisang made the recommendation in a report tabled in Parliament.

Kisang (Marakwet West) said there were sufficient grounds for the removal of Mutemi who is also communications manager at the IEBC.

The Kisang led committee was handling the matter after Parliament was petitioned on the appointment of Mutemi as a board member of MCK.

This comes as the Independent Electoral and Boundaries Commission last week said it was neither consulted nor notified of its communications manager Mutemi’s appointment as a board member of the Media Council of Kenya.

The agency said her appointment at MCK is not viable as long as she holds her current position.

In a letter to Parliament, the IEBC had said it would take action against Mutemi  "at an appropriate time".

The Head of Public Service Joseph Kinyua had also termed the appointment of Tabitha Mutemi as an independent member of the MCK board as untenable.

In a letter to the clerk of the National Assembly Michael Sialai, Kinyua said the Ministry of ICT is expected to take the necessary action to regularise the recruitment and secure an appropriate appointment in line with the Media Council Act.

Mutemi wins first round in battle for MCK job

MCK CEO had said that Tabitha Mutemi was no longer a member of MCK.
News
3 months ago

Kinyua argued that Mutemi is indicated as being an employee of the IEBC and as such, in the service of the national government.

He explained that IEBC is not specifically listed as a member of the board of MCK and Mutemi is not designated as representative thereof.

“Consequently, and under the Mwongozo Code of Governance, and Circular No. OP/CAB.9/1A of the 3 February 2016, Mutemi would be ineligible to serve as an independent member of the MCK,” he said in the 23 March 2021 letter.

The ministry of ICT, Innovation and Youth Affairs, in a letter to the deputy clerk of the National Assembly Jeremiah Ndombi, said Mutemi's appointment to MCK is not supported by law and she should be removed from the board if she continues to be an employee of the IEBC.

Mucheru said no advisory opinion of the ministry was sought touching on the selection of Mutemi.

The CS said he did not convene a meeting with the selection panel before the submission of the report of the shortlisted candidates.

“The Media Council Act Section 7 provides that the selection panel shall determine its own procedure. Further, after carrying out the interviews, the selection panel shall select one person qualified to be appointed as the chairperson and seven-persons qualified to be members of the council and forward the names to the Cabinet Secretary,” he said.