• She has 33 years of experience in legal practice under her belt and a significant portion of those years has been in public service as a defender of human rights.

• For this, she has earned international accolades for tremendous contribution to jurisprudence in the expansion of the rule of law and defence of the vulnerable. 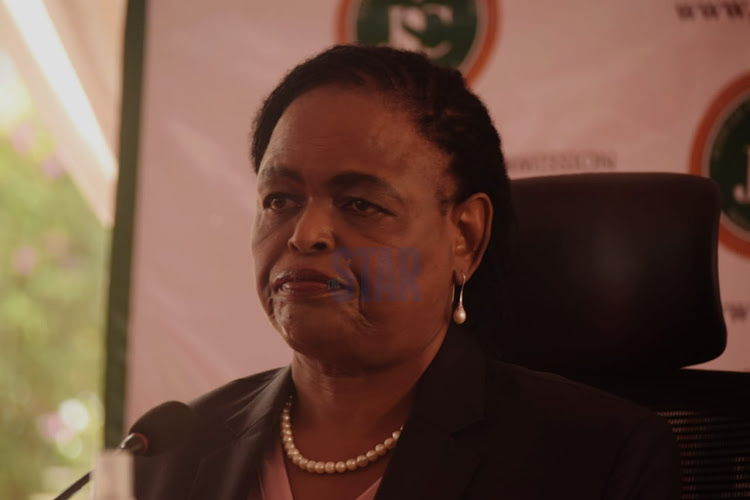 Koome was born to a peasant family in Kithiu village in Meru county but she beat all odds and is currently an internationally recognised human rights defender and an Appellate Judge.

She has 33 years of experience in legal practice under her belt and a significant portion of those years has been in public service as a defender of human rights.

For this, she has earned international accolades for tremendous contribution to jurisprudence in the expansion of the rule of law and defence of the vulnerable.

She is an acclaimed expert in family law and she takes a keen interest in children which earned her a recent recognition by the United Nations where she was named the UN person of the year run-up in 2020.

The Court of Appeal stayed the orders issued barring the recruitment of the Chief Justice.
News
1 year ago

Though she didn’t really make the choice of pursuing law as a career due to her humble background because there were no role models to inspire her from the village, she passed her exams with distinction and was admitted to study law and has grown fond of it.

“I grew up in rural areas in Meru in a village so I am a villager to the truest sense. My parents were peasant farmers and we were 18 children from two mothers. So, for all of us especially girls, it was a struggle to overcome the odds, but by grace of God, I was able to go to school and graduated from the University of Nairobi in 1986 with a Bachelor's degree in Law, proceeded to the Kenya School of law and attained a Postgraduate diploma in law in 1987 being admitted to the Bar as an advocate the same year,” she said.

Judge Koome proceeded to do Masters in Law in the University of London graduating in 2010 with a master’s degree in Public International Law,

Before her appointment as a judge, Justice Koome practised law as an advocate pursuing ideals of a democratic society that respects rule of law.

Earlier in her career, as a private practitioner running her own law firm, she was elected as a council member of the Law Society of Kenya in 1993-1996.

It will be remembered those were the volatile period of the Moi regime when the democratic space had shrunk tremendously.

During her tenure at LSK, she took a leading role in constitutional and legal reforms.

That way Judge Koome joined the reform movement and was part of the constitutional review process as a delegate at the Bomas of Kenya where she partially chaired the thematic area on the Bill of Rights.

Her efforts with others eventually birthed the 2010 Constitution.

Justice Koome was recognised for her advocacy for the rights of children.
News
2 years ago

She was also elected Chairperson of FIDA one of the leading human rights organizations that is recognized nationally, regionally and internationally.

While at FIDA she provided strategic leadership during the reform period and the organization contributed to family law reforms and advocacy.

The soft-spoken judge has provided leadership in regional bodies such as the East Africa Law Society where she was the inaugural treasurer in 1994-1996.

She was appointed by the African Union meeting of heads of states in 1995 as a Commissioner to the African Committee on the Rights and welfare of children.

In this role, she has trained many including as a visiting lecturer at the Judicial Training Institute and Strathmore University.

While working in the Family Division of the High Court Justice Koome came up with a tool to simplify the process of filing cases in the family division.

She also served as the Presiding Judge at the Nakuru Law Court where she introduced a case management strategy that considerably reduced the backlog of cases.

She led the Nakuru Law Court in starting a Court User Committee which is now a structure acknowledged in the administration of justice.

“I was posted to Nakuru as resident judge and I was in charge of all the area up to Naivasha, Nyahuru, Bomet and Kitale and we covered all the area as a team of three judges and I was the presiding judge,” she said on Wednesday before the Judiciary Service Commission interview panel.

Among other initiatives she took was reaching out to lawyers who gave justice to juveniles and that has now birthed the national legal aid scheme.

Justice Koome is also credited for restoring the bar bench relationship in Kitale Court where she was posted following a strike by lawyers.

She also ensured litigants in far-flung areas of Kakuma and Lokichar got justice as she operated mobile court stations to make it easier for witnesses who traversed many kilometres to come to court in Kitale.

“I used to go to Kakuma myself where witnesses were not able to come and I covered that entire bordering frontier that covered Uganda, South Sudan and Ethiopia. I was able to foster partnership with development partners and I am proud my efforts resulted in the construction of a Court station in Kakuma working closely with UNHCR,” said the judge.

In Nyeri where she served together with retired judge Alnashir Visram and late Justice Otieno Odek the team cleared the backlog of cases in record time.

Judge Koome brings to the table rich jurisprudence that expands the law to promote and protect rule of law and social justice and protect human rights.

She brings practical experience in dealing with a backlog of cases, working with other stakeholders as she has done as the Chairperson of the National Council on the Administration of Justice Special Task Force on Children matters that bring all the actors in the administration of justice.

She prides herself on having interpersonal skills that foster collegiality and teamwork.

She prides herself on expanding the scope of judicial review from the traditional commonwealth principles to include the principles in the Kenyan constitution that include proportionality and fair administrative action.

Judge Koome also says that she brings on board collegiality and values of integrity.

Bench she was part of heard and issued orders in absence of one party.
News
1 year ago

She believes that the Independence of the Judiciary is entrenched in the Constitution, it is sacrosanct and completely a no go zones as far as decision making and recruitment is concerned.

However, there is interdependence in other areas with other arms of government and there is a need to work towards a harmonious working relationship in policy matters that touch budgets, and administration of justice.

However, the three arms of government, she said, are interrelated because they all serve Kenyans.

“We can’t say we can’t talk to you so who will serve Kenyans.”

She strongly believes in leadership that brings about collaboration because justice is a chain link in which all the departments must do their work.

The judge who loves walking and spending time in her shamba when she is not writing decisions is a mother of three.

She looked up to her mother as her number one source of inspiration.

Justice Koome admired the determination of her elder sister, Rosemary Kathure who had cleared the path for her when she graduated in 1973.

This strengthened her resolve and along the way, she was encouraged by trailblazers like Prof Leah Marangu and Dr Jenifer Riria who she proudly calls her role models.

She is married early in life to her childhood sweetheart Koome Kiragu and together they have three children.

She has been a role model and a keynote speaker in many forums mostly advancing the values of family and sharing her own experiences of how to balance, career growth, work and family.

Says she will tribunals are answerable to the registrar of tribunals appointed by JSC.
News
1 year ago
Post a comment
WATCH: The latest videos from the Star
by JILLO KADIDA News Editor
News
27 April 2021 - 17:14
Read The E-Paper