JSC given green light to nominate next Chief Justice

Judges ruled High Court didn't deal with issue of jurisdiction before they issued the orders.

• This now means that the interviews scheduled for this week for the Supreme Court judge can proceed though they will behind by two days.

• Justice Patrick Kiage on Tuesday said it is in the public interest that they have decided to stay the order. 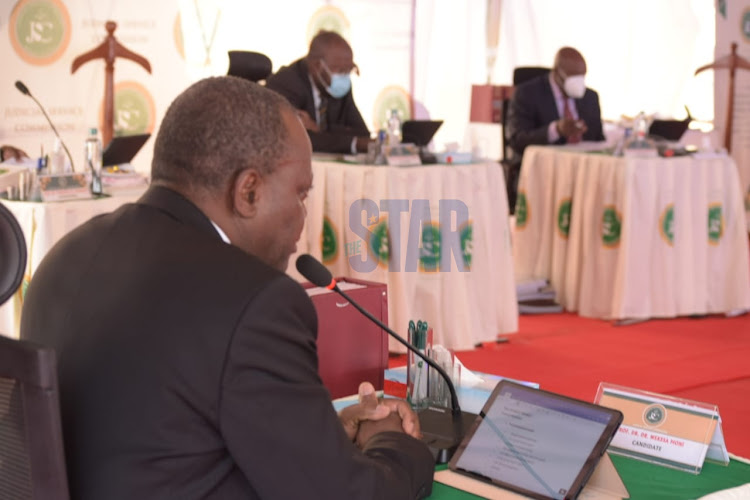 Professor Wekesa Moni during his interview for position of Chief Justice before the Judicial Service Commission panel at the Supreme Court on April 22, 2021.
Image: CHARLENE MALWA

The Court of Appeal has stayed the orders issued by the High Court barring the recruitment of the Chief Justice.

Justice Patrick Kiage on Tuesday said it is in the public interest that they have decided to stay the order.

This now means that the interviews scheduled for this week for the Supreme Court judge can proceed though they will behind by two days.

"The orders granted by the high court last week barring the continuation of the recruitment and appointment of the chief justice and is hereby stayed pending the hearing of this intended appeal," the court ruled.

The three-judge bench has stayed the orders saying that the High Court did not deal with the issue of jurisdiction before they issued the orders.

Speaking to the press after the ruling, Lawyer Danstan Omari representing one of the petitioners says they are not satisfied with the ruling but they cannot move to the Supreme Court.

Omari said as it is now, there are only four judges at the apex court when you remove Deputy CJ Philomena Mwilu who is at JSC and can not handle the matter.

The three judges were expected to give the ruling on Monday, however, judge Roselyne Nambuye said it was not ready.

The court had on Monday morning heard the appeal filed by the JSC and AG challenging the orders halting the Chief Justice recruitment.

The commission was seeking to suspend the orders issued by the High Court last week halting the recruitment.

The JSC had warned there will be a constitutional crisis if the selection of the CJ and a Supreme Court judge is not concluded.

It had asked the Court of Appeal to quash the decision halting the recruitment process.

Last Friday, JSC chair Prof Olive Mugenda said the commission would not conduct interviews for the Supreme Court judge that were scheduled for this week because of the orders.

The commission has also been barred from deliberating on the suitability of the 10 candidates interviewed for the CJ position.

On Monday, Justices Juma Chitembwe and Martha Koome were to be interviewed for the position of Supreme Court judge.

JSC argued that if the orders are not set aside there will be a legal vacuum especially in the process of recruiting the Chief Justice.

The four petitioners on their part challenged Mugenda position as chair of the commission during the interview.

They further claim that commissioner Paul Gichuhi retired from public service and is illegally sitting in the commission.