They call for thorough investigations of the whole process to establish where the mischief was planted. 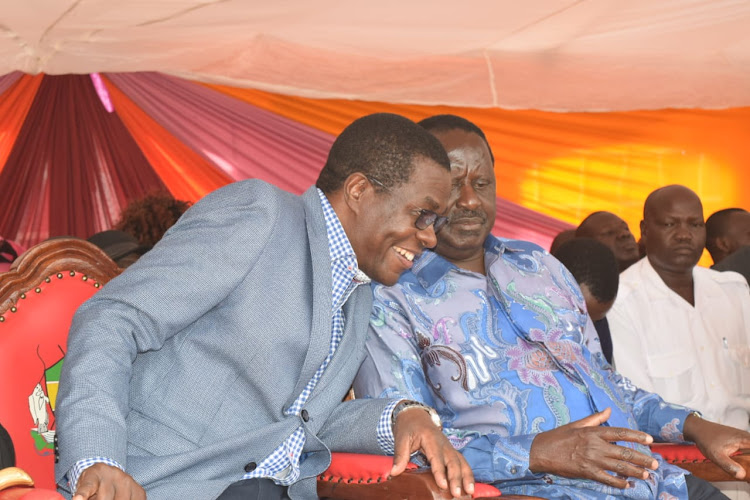 Whereas the allies are not clear on the source of the sabotage, a number who spoke to the Star admitted the existence of a deep-rooted force out to scuttle the process so that BBI spearheaded by President Uhuru Kenyatta and Raila does not reach the ballot.

Initially, promoters of the Constitution of Kenya (Amendment) Bill, 2020 were working with a June deadline, a timeline that is now becoming a mirage by the day.

A number of pro-BBI lawmakers who spoke to the Star called for a thorough audit and investigations of the whole BBI process to establish where the mischief was planted.

ODM political affairs secretary Opiyo Wandayi, a close ally of the ODM leader, put the blame on the doorstep of the joint team which he stated has been penetrated by the anti-BBI forces.

“Let me say this categorically: the enemies of BBI and by extension the handshake have found convenient allies in the joint parliamentary committees of legal affairs,” Wandayi said on the phone.

He added: “These elements are hell-bent on derailing the BBI process and eventually scuttling the handshake. They are throwing spanners in the works in order to achieve this end.”

Raila’s lawyer Paul Mwangi told the Star that saboteurs might have had a leeway in the committee to sink the project.

“When the committees start saying they have different versions, where did they get that from? The committees are supposed to get the document from the Speaker. The Speaker had only one document he received from Chebukati so who are these people in the committee who are claiming there exist other documents?” Mwangi posed.

He maintained the law ring-fences the referendum process, ruling out any window for introduction of any document apart from the one submitted by the IEBC.

“This is just an attempt to sink this thing (BBI Bill). I am wondering at what stage another document could come in because the process is very clear and the processes do not allow the introduction of another document apart from that which is given by IEBC chairman.”

Mwangi was the joint secretary of both the BBI task force and the steering committee which birthed the bill.

ODM chairman John Mbadi – another close ally of Raila- was cautious on the matter, saying he would speak when the committee tabled its report before the House.

“We will get the report; we shall deal with it when I get it officially. When it comes to parliamentary procedure it has to come to Bunge officially,” he said.

Lugari MP Ayub Savula wants the IEBC, BBI secretariat, defunct BBI steering committee, Government Printer and speakers of affected assemblies to be summoned by the joint team to establish the origin of the confusion.

IEBC chairman Wafula Chebukati on Wednesday told the Star that the commission forwarded the same document received from promoters to the 47 county assemblies as well as the Speakers of the bicameral Parliament.

The ANC lawmaker stated he would move a motion when Parliament resumes from the Covid break to have the matter handed over to the Supreme Court to advise on the way forward.

“There is sabotage and it has already been done. Let the investigative arms of the government do the investigation but I will move a motion in Parliament to have the matter handed over to Supreme Court for a professional opinion on how BBI should progress in the event of this mix-up,” he said.

Nominated MP Godfrey Osotsi while defending the joint team admitted a possibility of underhand dealings to defeat the bill.

“Yes, I know some elements within the JLAC could be (Deputy President William) Ruto's supporters but you cannot wholesomely blame the entire committee because some of the issues they are raising are genuine issues,” Osotsi said.

DP Ruto and allies have been opposed to BBI, arguing it has nothing for the million poor Kenyans.

Osotsi described the revelations that there was variance in the BBI copies transmitted to county assemblies as disheartening and unfortunate.

He called for a thorough audit of the whole process, adding that everyone involved in the conspiracy should face the law.

“We need thorough investigations and audit of the whole process from the Government Printer on how the bill that was taken to promoters and what the promoters sent to IEBC and what the commission took to the county assemblies,” he said.

He said the revelation "has actually derailed the whole thing; it means that even Parliament cannot proceed with this because the threshold has not been met".

“What are being discussed are typographical errors that cannot be said to be substantial enough to constitute separate bills,” he said.

The same line was taken by Raried MP Otiende Amollo, who clarified that 35 county assemblies that were said to have debated the wrong version of the BBI bill got the correct one.

The National Assembly JLAC vice chairperson said claims that only 13 county assemblies got the correct bill certified by the IEBC were untrue.

“As a matter of fact, 35 county assemblies got the right version. All of them approved the bill. This is a non-issue because the Constitution speaks of 24,” he said.

Amolo said the joint committee was considering whether to approve the bill as is or make corrections to remove the conflicting references.

“There are small issues in terms of typos. The question is, can Parliament correct typos? We are discussing that. We can agree that we have the authority to correct errors of form and typos,” he said.

Amolo said the alternative is that the House can pass the bill as is, then bring a motion to correct the typos after the bill is approved by Kenyans.

The lawmaker said Parliament has power to amend the bill, as its function is different from that of county assemblies.

“The truth is that the role of Parliament cannot be ceremonial. The difference between the role of county assemblies arises from powers given to Parliament in the Constitution Article 94 (1) (3), and (5).

“Nothing can become law without the stamp of Parliament. Our role is much higher than county assemblies,” the lawmaker said.