Wekesa: Prof who wants to hire musicians to sing about Judiciary 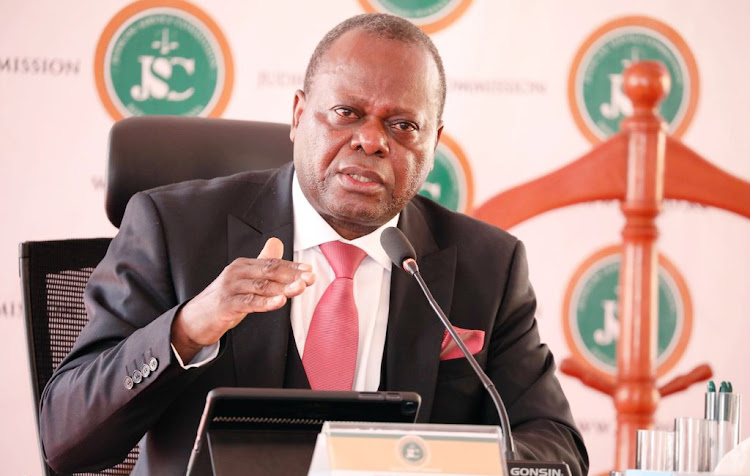 Law professor Dr Moni Wekesa who is eyeing the position of Chief Justice on Thursday said he will take Judiciary to the public and hire musicians to sing songs about the institution and the work it does.

The professor who has taught law for the last 10 years described himself as a transformative leader and promised to prioritise mending relationships between the Judiciary and other arms of government.

In his view, an effective Judiciary is one where cases are resolved quickly and people are treated humanely.

To achieve his goals, Wekesa plans to engage with law schools by ensuring that judicial staff will voluntarily teach at least one course, run law programmes on local TVs to enlighten Kenyans on what Judiciary is doing with an aim of getting them to own the institution.

“I will make Judiciary people owned where they have a lot of information about it and are able to associate with it so that should we want to know about corruption, they will tell us,” he said.

Also, he will bring on board musicians to compose songs on Judiciary, songs carrying the message of how to approach it, what it does, songs about disobedience of court orders with an aim of making people understand the institution well.

The professor has done a paper on use of music therapy to help improve people’s performances.

He believes that music changes people’s moods and helps their bodies generate hormones that make people feel good and in turn improve their performance.

“Music therapy is given to people with short attention span…Music is also used to exorcise evil spirits in some communities,” he said.

Courts should allow other arms of government to do their work but at the same time it has to check whether what has been done is constitutional, he said.

Wekesa who has been a law teacher since 2010 disagrees with courts or Judiciary legislating in the strict sense of the word.

“The Constitution is very clear in creating three arms of government with distinct functions. When we talk of separation of powers there must be a separation of functions, persons and powers. The Judiciary must focus on what it is supposed to do. Judiciary cannot legislate.”

He added: “If a process of legislation and legislature is not able to take care of minute details of law then Judiciary is called up to interpret and in the course of that, one might be said to be legislating.”

He promised to prioritise empowering judicial staff by holding workshops and exchange programmes in other countries.

Wekesa will also get at least 15 scholarships for Judiciary staff annually to improve on their competences.

He gave an example of how a team he chaired came up with an Anti-doping law and agency to curb the doping menace which was threatening the future of Kenyan athletes.

Wekesa was also put on the spot over a report he did when he was at the Anti-doping task force.

Kenya Rugby Union had complained that he never gave them a chance to be heard in the anti-doping task force.

Commissioner Macharia Njeru wanted to know why they didn't give them a fair hearing but still went ahead to condemn them.

Wekesa said when he was appointed, a total of 34 athletes had tested positive for banned substances and they needed to come up with a solution.

He said 236 rugby players were interviewed and 78 of them said they know someone who used steroids.

"We wrote to the chairman of KRU to appear before us to explain the issues," he said

Wekesa said all samples picked had tested positive and some of the players said they were being given the substances by the coaches.

They decided to write in the report and recommend that the coaches undergo disciplinary process for being involved in doping.

His defense is they solely relied on research.

Having been employed by several universities, Wekesa was asked how he can be entrusted with the Supreme Court given his nomadic tendencies coupled with the court’s nomadic jurisprudence.

He defended his movement from one employer to another saying he was just exercising his right to employment which has given him more experience.

“What is being described as nomadic tendencies is a wonderful right to employment. What I have done is exercise my right to employment and gain experience. A person who has travelled has seen a lot and I want the commissioners to entrust me to that extent,” he said.

And on the Supreme Court, he noted that it is too early to pass harsh judgment on the court because it is very young and given a little more time jurisprudence will settle.

He said he cannot talk about corruption in the Judiciary since he does not know about it, but added that in all reports he has read, the word corruption features, which points to its existence.

He proposes a continuous discussion on why corruption should not be there.

Secondly, he plans to engage others who benefit from Judiciary services to desist from bringing corruption to the institution.

Wekesa also believes increasing automation of the court system will cut out some avenues of corruption.

“I have never given a bribe but have been arrested several times for traffic offences and held in cells in Kibera law courts and Naivasha,” he said.

He said he designed the digital traffic court which is helpful to Kenyans.

He believes this will help Kenyans pay for the traffic offence and driver once he pays penalty, he or she can be able to go in less than eight minutes.

At a parastatal, he designed an anonymous digital reporting system to report any offence to curb leakages within that specific parastatal, which he believes if adopted can help Judiciary deal with corruption.

He would like to see in place a defined curriculum for training judges and magistrates.

Wekesa suggests improving working conditions where everyone feels appreciated, their opinions valued so that the output is also at par with the Judiciary’s expectations.

He also defended the decision by Daystar University to hold prayers every morning before they begin classes.

Commissioner David Majanja wanted to know if that would not be seen as discriminatory to the other students who are not Christians.

He said it's true that they hold prayers but to him, it would be a problem only if the school makes it compulsory.

He also told the commission that the prayers have never been an issue considering they had a number of Muslim students.

Wekesa said he has also worked at Catholic University which was also a Christian-based institution that had students from all backgrounds.

At the beginning of the interview, he also told the commission that he was the one who founded the School of Law at Mount Kenya University.

He said he was the one who introduced the culture of all students wearing suits twice a week so that they feel and emulate practising lawyers.

Wekesa said he consulted with the students themselves who had raised that concern and they agreed on two days a week unlike Daystar University where it's mandatory to be in a suit five days a week.

Wekesa also explained how he decided to study law even after attaining a Ph.D. in education.

He said when he took the national team to Helsinki in 1992 one of the team members punched someone and was arrested.

So, the team nominated him to sort the issue and release the boy and that’s when he got interested to study law, especially international law.

Wekesa has two doctorates one in Sports and the other one in law.

Mugenda also wanted to know why he refers to himself as Professor Dr, Dr, Moni Wekesa. He said he picked that up in central Europe.

Wekesa said he is a Sunday school teacher.

On his two doctorate titles, Wekesa says he is not really into titles and as long as it's not academic you can refer to him without his titles.

On being severally arrested on the road for traffic offences, he said it's normal sometimes to exceed the speed limit by a few kilometres especially when coming down a hill.

If appointed a CJ, the law professor said he will negotiate with the Executive in order to have 41 judges whose hiring has delayed be sworn in.