Ruto said that bottom up approach will include more Kenyans in the growth of the country.

• Ruto said during the meeting with former CBK Governor Njuguna Ndung'u that the state of the global economy demands new thinking, bold ideas, and fresh paradigms.

• The DP said that the new approach will ensure more resources are invested in the grassroots, greater economic participation, and an expansion of the tax base. 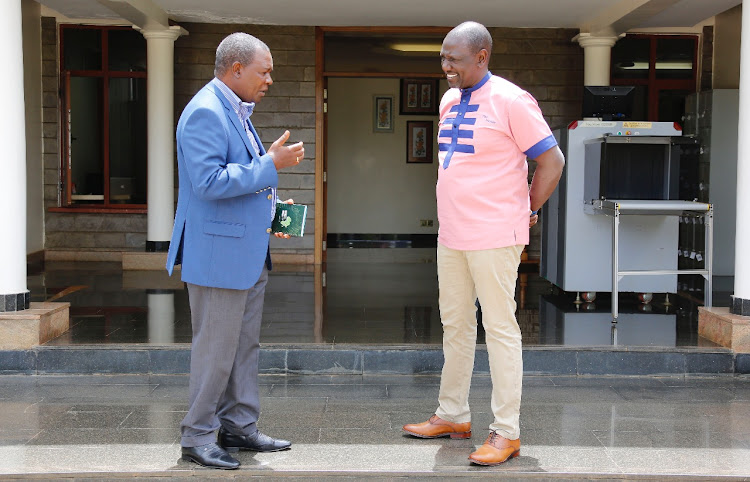 The two held talks at the DP’s residence home in Karen, Nairobi on Thursday.

“We must include more Kenyans in the growth of our country. This is why we are proposing a bottom-up approach to develop the economy,” Ruto said.

Njuguna is an economist, as well as economic researcher who served as CBK’s governor for two consecutive four-year terms, from March 2007 until March 2015.

The DP said that the new approach will ensure more resources are invested in the grassroots, greater economic participation, and an expansion of the tax base.

“It is gratifying to see economic experts endorsing this approach and expressing willingness to partner with us to actualise this revolution.”

Earlier, the DP said that there is a need for the country to change its economic model in order to help more than 15 million jobless Kenyans.

Ruto has been defending the Hustler narrative, saying that those who fall in the category are the answer to the country's economic woes.

He has also said the bid to end the economic distress among the informs his 2022 bid.

According to the DP, sorting the hustlers was the Jubilee second terms agenda citing an initial plan to create jobs for the group.

In his earlier interview with Citizen TV, Ruto said that Kenya's problem is the bad economy which can be fixed by a better leadership.

"I believe with good leadership we can transform the hustlers...drive small micro enterprises. That is where mama mboga, boda boda... everyone talks about them because we have changed the conversation to be about ordinary people.”

Ruto on the other said he had at no point made reference to any group of people as dynasty.
News
1 month ago
by KEVIN CHERUIYOT Online Journalist
News
22 April 2021 - 18:18