Where were you when Maraga addressed issue of 41 judges? Murgor asks JSC

• Says Maraga should not have been alone but surrounded by his fellow commissioners when he addressed the media.

• Says he will interact with the President in his first day of office in a bid to resolve the appointment of judges standoff. 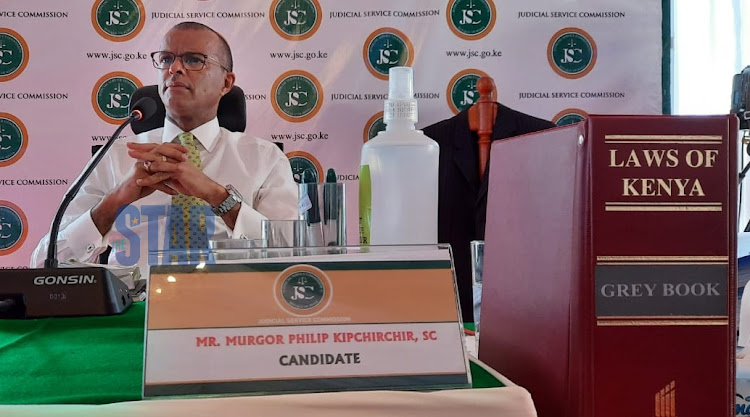 Philip Murgor before the vetting panel at the supreme court on April 16, 2021. Photo/ Fredrick Omondi

Senior Counsel Philip Murgor has questioned where the JSC commissioners were when former Chief Justice David Maraga addressed the media alone on the issue of 41 judges.

He said Maraga should not have been alone on the steps of the Supreme Court when he addressed the President on the matter.

Instead, Murgor said, Maraga should have  been surrounded by his fellow JSC commissioners.

Murgor said he will interact with the President in his first day of office in a bid to resolve the standoff over the appointment of 41 judges.

“I will not leave State House until we deal with this crisis,” he said on Friday.

In the 2019 media address, Maraga accused President Uhuru Kenyatta of refusing to meet him to discuss the stalemate over the appointment of the judges proposed by the Judicial Service Commission.

Maraga said Uhuru's refusal to swear in the judges had contributed to the backlog of cases in the Judiciary.

Murgor further accused the JSC of having so many sittings and not extraditing the complaints against judicial officers that are brought before the commission.

“You have too many sittings as the JSC,” he said.

He said the sittings should be reduced because they are taking up a chunk of the funds.

He also said tribalism is the biggest scourge in Kenya and there must be inclusivity in the JSC and the Judiciary to have the face of Kenya.

Murgor said he was sacked as DPP because he was not covering for the then ministers of the regime that had put him into office.

"By my second year the files we were reading were for the ministers of the same government. I ceased to be the blue-eyed body because I was not covering up,"he said.