I have no problem with Uhuru launching projects with Raila – Ruto

•He reminisced the time during their first term when they “worked as a pair and we conducted business as we agreed.” 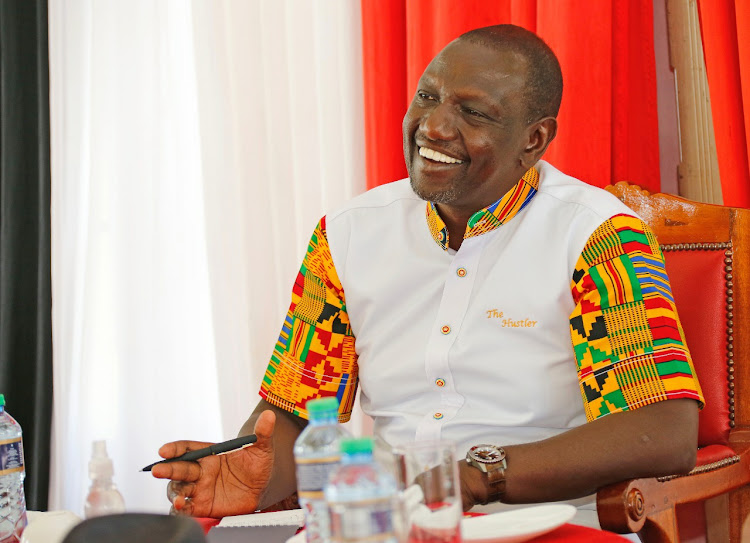 DP William Ruto at a past event.
Image: DPPS

Deputy President William Ruto on Thursday defended President Uhuru Kenyatta’s involvement with the opposition in the running of the government saying the head of state has the prerogative.

The DP for the first time admitted there are challenges in his relationship with the President, but said it wasn’t to the extreme as may be painted in political circles.

Ruto further said he has no problem with the President inspecting Jubilee projects with ODM leader Raila Odinga and other politicians.

In an interview with Citizen TV, the DP said the role of a deputy president is that of being the President’s principal assistant but the head of state has latitude to choose which advice to take.

“Admittedly we have challenges. It is in the public domain that the way I worked with my boss from 2013 to 2017 is different from the way we have worked from 2018 to now.”

He reminisced the time during their first term when they “worked as a pair and we conducted business as we agreed.”

The DP said his boss has, however, broken no law in choosing to work with other leaders adding that he (Ruto) has remained forthright in his job.

“If the president has decided to consult more people, I have taken it with grace because of the respect I have with the office of the president.”

The DP, who maintains he would not quit by virtue of his election in a joint ticket with the President, said he can support the government doing whatever else there is to be done.

Ruto added that he has no regrets whatsoever adding that he has done the best I could. “I think we have done better. I am satisfied with my performance as Deputy President.”

He said that from 2017, it was the prerogative of the President to reorganize how he wanted the government work and who to play what role.

The DP blamed the “change of style and new advisors” for the change of the governments’ priorities saying the developments are to blame for the slowed Big Four projects.

“The priorities became the handshake and BBI. Big Four agenda was slowed down. The space I occupied before was taken by other people. The priorities changed,” Ruto said.

The DP said it was until after 2017 that his detractors started to complain about him launching projects and facilitating government activity.

Ruto further revealed that he discussed the issue with the President and that he was candid he wouldn’t change his style of politics.

He dismissed those after him saying at no point would he throw tantrums and take on the president at the height of the upheavals around his tenure.

Ruto also clarified that at no point has he insubordinated his boss or acted or elevated himself in a manner suggesting so.

“I have never been co-president. I want any information to be produced that I have done in private or in public to disrespect the president or to elevate myself beyond the position I hold.”

On the next elections, the DP took a swipe at politicians angling for endorsement by the President saying they should be made aware it is the people of Kenya will elect the next president.

“The next president will not be appointed. I did not tell the President to hand over the baton to me. I knew if I was to run I would have to assemble myself and face Kenyans with an agenda.”

“I don’t expect anyone to expect to be appointed the president or be given the presidency by anyone. The people will decide,” Ruto said.

The DP, in defence of the apparent irredeemable relationship with Uhuru, added that he would not take offence whether the President supports his bid or not. “I am clear in my mind it is the people who will decide.”

On questions of why he has not resigned, Ruto said: “I was not elected DP by Raphael Tuju but by the people of Kenya. I occupy this office by the decision of eight million Kenyans who voted for me and Uhuru Kenyatta.”

The DP, however, said it was “emotional for him that he has been locked out of Jubilee” having come from the “very bad past where politics was on based on tribe.”

“I have invested a lot of time, energy and emotions in assembling the Jubilee Party to create a platform where we can develop. It is sad that the party has been taken hostage and dismembered it.”

Ruto also defended his links with the UDA party saying there was no wrongdoing as the party is an affiliate of the ruling party.

The DP said it was regrettable that the party was at war with marginalized communities, women, and persons with disabilities – in reference to the purge targeting six nominated senators the party seeks to expel.