They do it avoiding places where there is light or cameras.

•Another suspect was in 2019 captured by CCTV cameras as he scaled walls of residential apartments in Kilimani.

•He is suspected to have stolen money on the day the footage was captured. 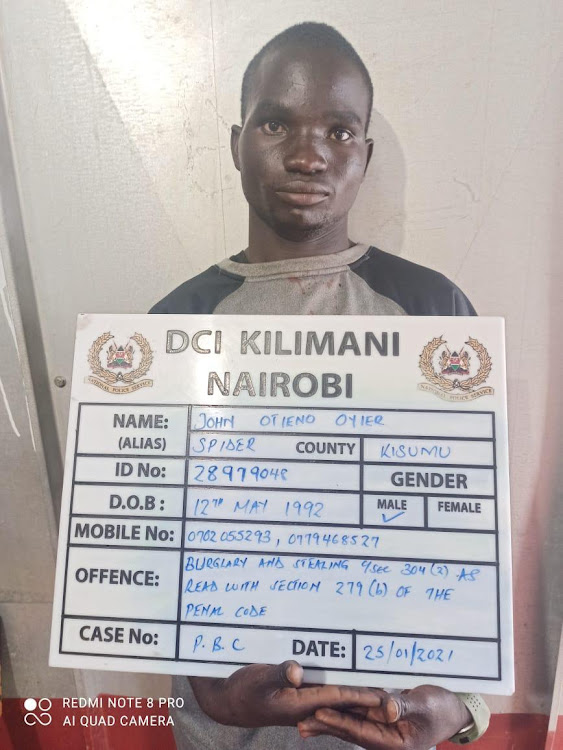 A burglar who has been scaling walls in Nairobi apartments and stealing electronics, money and jewelry has been arrested.

The suspect now popularly known as “Spiderman 3” was identified as Kennedy Otieno Oyier.

Kennedy is a brother to another suspect- John Otieno Oyier- who had been arrested in January this year and charged in court over burglary and remanded at the Industrial Area prisons where he is being held, police said Monday.

Kennedy was arrested Sunday night in an operation following increased incidents of burglary in Kileleshwa, Parklands, Lavington, Muthangari and Westlands.

He had been on the run in the past weeks when he knew police were looking for him. He had changed his residence after his brother was arrested.

Kennedy told police he and his brother got skills of scaling the walls from a movie that they watched online.

He said they have been to many residences in the areas and managed to get away with valuables after breaking into houses using metal rods and master keys.

They do it avoiding places where there is light or cameras.

They do it at the weekends, early in the morning or late in the night when the occupants are not in.

After his arrest, the suspect led officers to his residence in Kawangware where several laptop bags were recovered and two motor vehicles which were towed to Kilimani Police Station.

The suspect will be arraigned with a miscellaneous application for custodial to assist police with investigations.

Police want those affected to visit the station for further processing.

The arrests followed a series of incidents in the areas where residents lost their valuables and cash.

Police believe he has been working with some guards of the affected apartments to complete his mission.

Nairobi police boss Augustine Nthumbi said they are investigating to establish if the suspect is linked to many other incidents that have been reported elsewhere.

“We are looking for more suspects who we believe were in the cartel,” he said.

The suspect was arrested for the offence of burglary and stealing and is expected in court today.

Another suspect was in 2019 captured by CCTV cameras as he scaled walls of residential apartments in Kilimani.

He is suspected to have stolen money on the day the footage was captured.