Some say it's for the students' safety; others argue it might intimidate the candidates

• Over the last half-decade, the Ministry of Interior has used 70,000 police officers in the administration of KCPE and KCSE exams.

• The Education ministry requires that at least two police officers be stationed in every school during the KCPE and KCSE exam period. 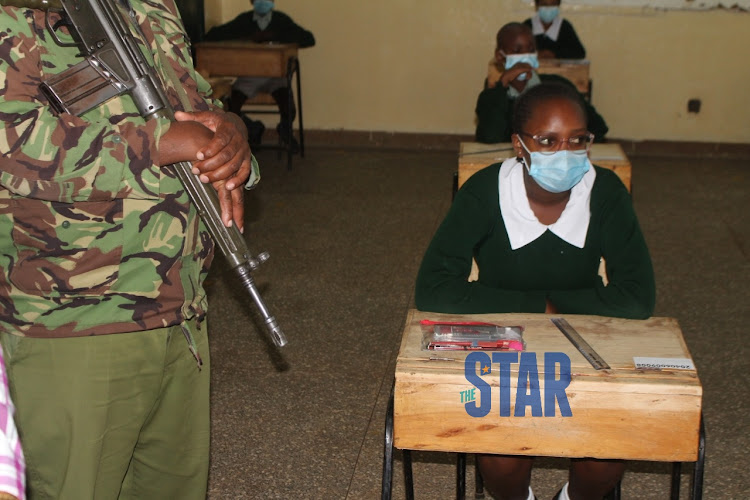 Some 70,000 police officers are sent to man schools during the KCSE and KCPE exams every year, but experts are divided on whether their presence offers safety or instils fear.

Some experts argue that the presence of uniformed officers is likely to intimidate candidates; others think their presence bolsters security, but another group suggests it is a mix of both.

Nicholas Maiyo, the Kenya Parents Association chairman, said the presence of police is important more so when the school is within an area prone to insecurity.

“Take for example places like Mandera and Lamu that are prone to frequent terror attacks on account of bordering Somalia and Baringo, West Pokot that experiences banditry, the presence of police provides standby response in case of an attack,” Maiyo said.

But he finds it unnecessary to subject the students to the show of uniform and guns.

“It would be ideal if the police were dressed in civilian clothing like the security detail of high ranking officials and elected leaders,” Maiyo said.

He argues that this would assure the safety of the examination centres and at the same time ensure children would not feel intimidated.

Maiyo said that the parents’ caucus will move to call for reforms on the use of uniformed and armed police in schools. He did not specify when it would be done.

Njagi Kumantha, a psychiatrist and former head of the Mathari hospital, said police presence in schools during the exam may be crucial should an emergency that needs security attention arise.

The uniformed men and women carrying guns and patrolling around during the examination could affect the candidates’ performance negatively, he said.

He cautioned that no conclusive evidence has been presented on both assumptions so it would be difficult to give definitive answers on the matter.

Kamantha said students who encounter police at school may be more likely to be criminally charged for infractions otherwise seen as “normal adolescent misbehaviour.”

xx An advocate who has researched juvenile justice and schools and is also a former prison warden said criminal acts in schools are infrequent and police presence is just a cautionary measure.

The Education ministry requires that at least two police officers are stationed in every school during the KCPE and KCSE exam period.

Those who sat the defunct O and A-level examination say that there was minimal to no police officers during the testing period.

“I only remember one policeman who was at the gate when I did my O and A level exams,” a source told the Star.

On normal days, schools only use security guards stationed at the gate and others who conduct regular day-to-day duties but without the powers and responsibilities of police officers.

The school security personnel are unarmed but for a rungu and refer criminal offences to the police for action.

A study conducted in Pennsylvania on the impact of police presence in the wake of mass shootings in schools in the US suggests that the presence of law enforcement officers is associated with increased student arrests and referrals to authorities.

The study also associates police presence in schools to significant negative outcomes including school drop-out and increased likelihood of future involvement with the criminal justice system.

In Kenya, over 200 students have been arrested in the last five years due to examination malpractice.

Some of those arrested were alleged to have carried mobile phones to class. The devices are outlawed in Kenyan schools and by the examination council.

Wilson Sossion, the Kenya National Union of Teachers secretary general suggested police are likely to take action of offences that would otherwise not be considered criminal.

He said students are arrested at higher rates for reasons like ‘disorderly conduct', which ordinarily would have been dealt with by school administrators.

Post a comment
WATCH: The latest videos from the Star
by LEWIS NYAUNDI Education Reporter
News
10 April 2021 - 23:00
Read The E-Paper